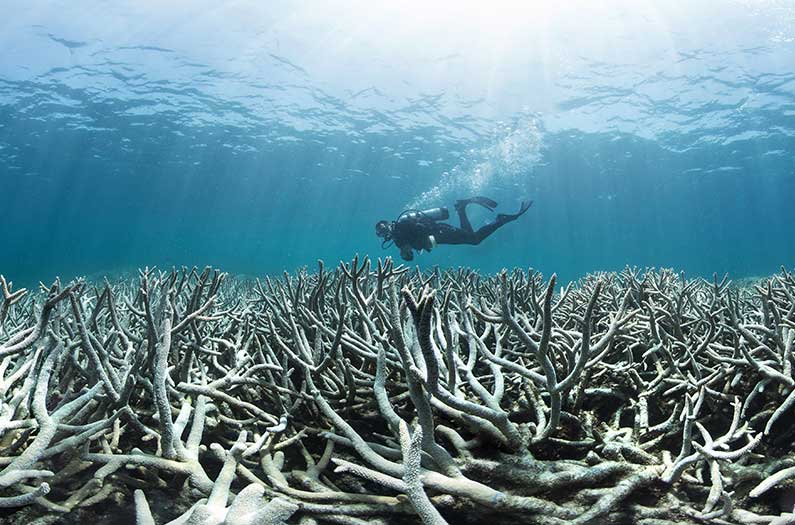 Probiotics could help save overheated coral

In lab experiments, an infusion of bacteria extracted from coral reefs made the difference between life and death for coral stuck in hot water.
By Warren Cornwall
August 18, 2021

At a time when the word “microbiome” has made it into the popular lexicon and people extol the benefits of yogurt, kombucha and other fermented foods, there could be another beneficiary of bacterial infusions: coral.

In recent years, scientists have wondered whether microbes in coral reefs might help buffer coral from some of the damage inflicted by rising ocean temperatures. Now comes news that a dose of extra bacteria could make the difference between life and death for corals in warmer conditions.

The new research offers a glimmer of hope for an ecosystem imperiled by climate change. Already, the findings have prompted scientists to prepare to test such bacterial treatments in the wild and devise tools to deliver the microbes to reefs.

“Someone recently asked me whether I was optimistic or mad, and I think a bit of both,” says Raquel Peixoto, a microbial ecologist at Saudi Arabia’s King Abdullah University of Science and Technology who led the new microbial work. “You have to be like a little bit crazy to think that these things can happen and can work.”

These are crazy times for coral scientists like Peixoto, who are racing the clock to halt the disappearance of some of the ocean’s richest ecosystems. The coming decade is likely the last chance to prevent a “world-wide collapse” of reefs by tackling climate change, leading coral scientists warned in late July. Just 30% of reefs are likely to survive even if global average temperatures are held to no more than 1.5°C above historic levels, the researchers warned. If the heat climbs by 2°C, just 1% of reefs are expected to make it.

The magnitude of the challenge was reinforced in early August when the Intergovernmental Panel on Climate Change issued a sobering report that concluded it will take swift and dramatic cuts in greenhouse gas emissions to avoid going above 2°C.

For coral, the problem is the increasing frequency of underwater ocean heatwaves that can stretch for weeks. Coral is, in many ways, part animal, part plant, and part inanimate sculpture. Coral polyps, which resemble tiny sea anemones, absorb certain species of algae into their bodies. The symbiotic relationship gives the algae a home and the coral a steady supply of nutrients from photosynthesis. The algae provide the brilliant colors of the hard exoskeleton formed by colonies of the polyps – what many observers call coral.

But a temperature spike can upend this delicate relationship, causing the polyps to expel the algae from their bodies. The reaction leaves reefs bleached white and deprives the polyps of a critical food source.  While the polyps can absorb algae again and revive themselves, extended or repeated bouts of bleaching can lead to death.

Peixoto first saw the power of microbes while studying how soil-borne bacteria affect plant health. She wondered if there might be a similar dynamic with coral. Over the last decade, she and colleagues have extracted dozens of bacteria from reefs, looking for ones with traits that might help heat-stressed coral.

In the newest study, she and fellow scientists from Brazil, Germany, South Africa, the U.S. and the United Kingdom took a probiotic blend of 6 marine bacteria found in coral reefs and added them to aquarium tanks housing fragments of Mussismilia hispida,  a modest, brown or grey coral that lives off the Brazilian coast. In some tanks the researchers dialed up the temperature from 26°C to 30°C for 10 days, then lowered it again. They examined how the coral in tanks with probiotics fared compared to ones without the extra bacteria.

While polyps the hot tanks bleached regardless of the bacterial treatment, the coral fragments with the probiotics all recovered and survived the 75-day study. Only 60% of the ones without the probiotics were alive at the end, according to a paper published Aug. 13 in the journal Science Advances. “This is the first time that we showed that probiotics can actually prevent coral death,” said Peixoto.

To figure out how this happened, the researchers studied metabolic by-products and the activity levels of different coral genes as the test unfolded.

One difference appears to be that the bacteria provide nutrients that help the polyps endure the loss of algae-supplied food, by breaking down a molecule called dimethylsulfoniopropionate (DMSP) that was released as temperatures rose, said Peixoto.

Coral treated with probiotics also had less intense physiological responses after the simulated heatwave, which the scientists labeled “post-heat stress disorder.” The coral that didn’t get the extra bacteria showed elevated activity related to cell death, cell rebuilding, heat stress and immune response. Peixoto suspects that algae were more likely to recolonize polyps that showed fewer signs of stress. “If they (algae) return to a dying coral, they will find a messed-up environment,” she said. “They want to have a good performance.”

The results are promising enough that Peixoto and others are preparing to test the probiotics on isolated reefs in the Red Sea, adjacent to the marine lab where she works. Those tests are aimed at making sure the probiotics don’t have any problematic side-effects on the reefs, and to monitor the corals for evidence that they become more resistant to heat stress.

While it hasn’t been cleared for broad use in the wild yet, she is already looking at ways to get probiotics to a reef when a heatwave is coming. Some options include sprinkling reefs with time-release capsules that gradually emit bacteria into the water or deploying robots that spray the probiotic.

She likened the work to developing COVID vaccines. There are many steps to making sure such a treatment is safe and effective, and the need is so urgent that they are rushing to advance on multiple fronts at once. “We have to develop the treatment before they are gone,” said Peixoto. “Because if you lose the corals, if they all die, there is nothing left to save.”