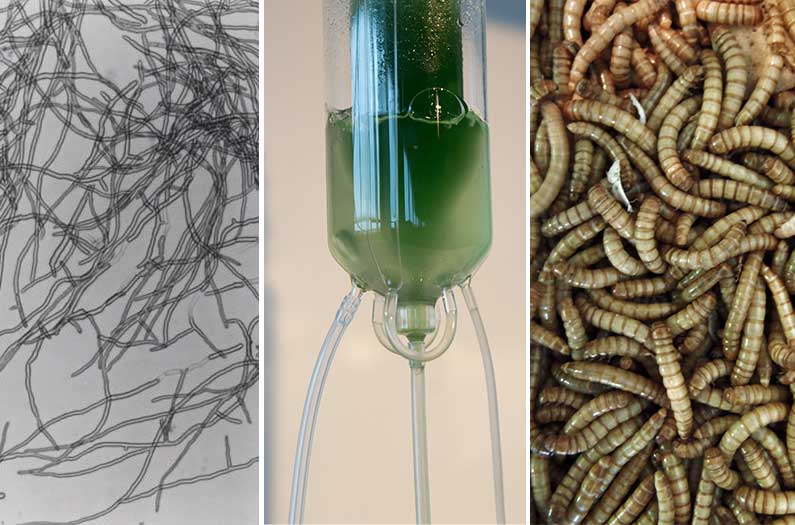 These are the novel ingredients for a sustainable diet

Seaweed, insects, and worms will be instrumental elements of our future diets, argue a group of researchers. Not only could these novel ingredients make our diets more sustainable, they say—but crucially, they could also make our food systems more resilient to climate change.

The challenge of sustainable diets is not just what foods will have the least impact on our planet, but increasingly also which foods we can sustain—and which ones can sustain us—in the unpredictable reality of our changing world. Agriculture, livestock farming, and wild fisheries—all our conventional methods of food production—are under increasing risk due to climate change, from weather extremes like drought and flooding, warming oceans, and the spread of pests and disease.

“Our global, conventional food system is inexorably exposed to a litany of risks,” says Asaf Tzachor, a researcher at the Centre for the Study of Existential Risk at the University of Cambridge and first author of the new Nature Food article. To respond to this, “we have to radically change the foods we farm and consume, as well as our farming approaches and techniques,” he says.

If we did reinvent food production in a way that made it more resilient to the risks of the outside world, what would it look like—and what could we farm? That’s what Tzachor and his colleagues wanted to find out. They reviewed 500 studies on food production systems, to determine which could weather the current and future risks. With this, they were able to develop a picture of what production systems, and what food types, would be most resilient against an unpredictable future.

This future food system, as they pictured it, would be extremely modular, would take place mostly indoors or under cover, and would be dominated by farmed insects, larvae, kelp, microalgae, and mycoprotein (a protein made from a naturally-occurring type of fungus). All of these ingredients, the researchers determined, could be produced in large quantities very efficiently, and crucially in systems that are mostly shielded from the uncertainties and risks of the outside world.

For instance, microalgae and mycoproteins can be rapidly grown in the perfectly-controlled conditions of a bioreactor, shielded from the elements. Populations of protein-rich insects and their larvae can be raised in burgeoning and ever-replenishing numbers in relatively small space—and as an added benefit could be nourished with food waste. Even seaweed aquaculture—the most exposed of the systems—occurs in a closed system that can be relatively well shielded from the elements and controlled.

These protected, modular systems of production also mean that outbreaks of pests or disease could be better identified and then contained, compared to the swift infestations that can occur on open agricultural field.

By farming a larger share of our food this way, we could also enable the more equitable distribution of nutrients, the researchers suggest. All these products are rich in nutrients like protein, calcium, iodine, zinc, and fatty acids, and because these systems are flexible, small, moveable, and highly-productive, they could be used to produce food almost anywhere—in places with limited land, in harsh or remote environments, even underground, Tzachor reckons. “Highly-nutritious foods could be grown at-scale in modular systems suitable for urban settings, as well as for isolated communities such as in remote island states,” he explains. That could also reduce the dependence on global supply chains, which can be easily disrupted by extreme weather and pandemics, as we’ve seen with Covid-19.

Read more:  Could nuclear power be a bridge to a zero-emissions world?

This more localized, decentralized, and reliable food system would enable a more equal distribution of nutrients across the planet, and help to combat malnutrition. This could make humans more resilient to the food shocks that might occur in conventional systems, under climate change.

These foods also lend themselves to diverse uses and forms, which could encourage their uptake, Tzachor explains. Products like insects could be eaten whole—or ground into flours and turned into products like pasta, if that was considered more palatable. Likewise for seaweeds, and mycoproteins—the latter of which is already widely-used to make meat-replacement products like Quorn.

The key is that these nutrients would be able to reach more people, could be efficiently produced, and would be resilient to the vagaries of climate change.

Yet, while we have already developed many aspects of this future food system—like bioreactors, and seaweed farm —we’re still far from any kind of future food system that resembles the study’s ambitious vision, whose authors caution that we shouldn’t overestimate the potential of these future foods. There are many hurdles still to overcome—such as developing the technologies to reliably, and renewably, provide the massive amounts of light and heat that production processes such as bioreactors would require. That would initially be a huge cost for many countries to bear. As well as this, regulatory approval for the new foods would likely be slow, and expensive. And, then there is the gamble of social acceptance: after all, trading meat for insect protein, and vegetables for a seaweed salad, could be a hard sell—initially, at least.

Nevertheless, as Tzachor sees it, none of that should dissuade us from investigating the real potential of this alternate way of producing food: these ‘future foods’ could be an auxiliary to our current food systems; a powerful buffer against increasing uncertainty. “Developing alternative food technologies, and decentralizing food production, is a critical pathway to ensure a risk-resilient and sustainable future,” Tzachor says.