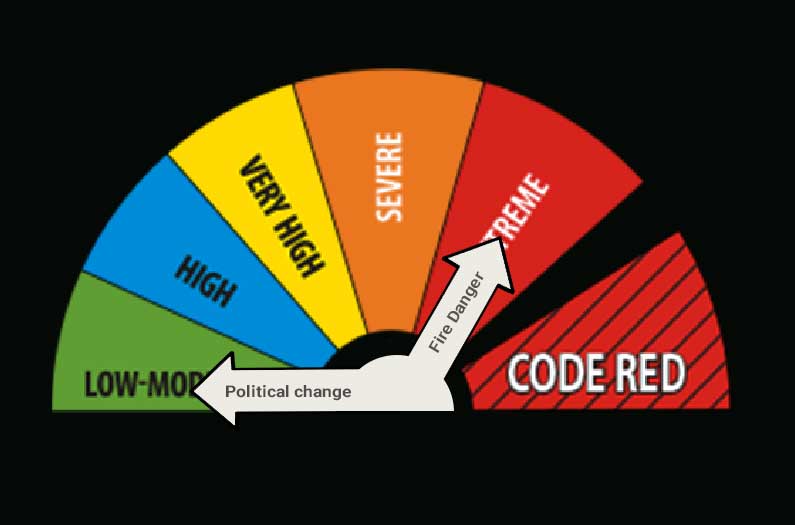 German researchers document another case in which even novel experiences won’t budge people from entrenched attitudes
By Sarah DeWeerdt
August 17, 2021

Experiencing unusual weather events does not change people’s climate policy preferences, according to an analysis of German survey data. Neither climate deniers nor acceptors are moved by local weather, the researchers found.

Past studies have shown that experiencing extreme weather events increases people’s likelihood of accepting the existence of climate change. The idea is that first-hand experience of unusual weather makes climate change and its consequences more tangible to people.

But few studies have focused on whether and how that translates into support for climate action. And it turns out that just because people accept that climate change is happening doesn’t mean they agree on what to do about it.

“Experiencing early consequences of climate change such as more frequent heat waves and storms does not change citizens’ climate policy preferences,” says Lea Gärtner, a political science and political psychology researcher at the University of Mannheim in Germany. “In other words, policy makers cannot rely on the increasing perceptibility of climate change to persuade people to support climate protection measures.”

Gärtner worked with University of Mannheim professor Harald Schoen to analyze data from a survey of more than 18,000 German voters conducted between 2016 and 2019. During each wave of the survey, participants answered questions about whether climate change is the most important problem facing the country, whether fighting climate change should be prioritized over economic growth, and whether gasoline and diesel cars should be banned after 2030. The study design enabled the researchers to track how individuals’ attitudes changed over time.

They cross-referenced participants’ answers with detailed data from 514 weather stations about 10 different weather phenomena associated with climate change. Germany experienced many extreme weather events during 2018 and 2019, including record high temperatures, drought, forest fires, water rationing, destructive storms, flooding, and heavy snowfall. But a lot of those events affected small areas of the country – making for a good case study of the effect of local weather conditions on climate change attitudes.

“We looked at very fine-grained weather data because we were interested in whether experiencing frequent early consequences of climate change, such as heat waves and storms, makes a difference for citizens’ climate policy preferences,” Gärtner explains.

But in fact, experiencing unusual or extreme local weather did not shift people’s beliefs about whether climate change is an important political problem, nor their support of policies to address it, the researchers report in the journal Climatic Change.

It may be that simply experiencing unusual weather isn’t enough to overcome people’s entrenched attitudes about climate policy, which are often strongly shaped by their political philosophy and partisan attachments.

So, if policymakers can’t just point to local extremes to build support for climate policy, what can they do? That’s beyond the study’s scope, but other research suggests that “it may be more helpful to make climate change messages less about climate change and more about other issues that people care about, such as ensuring continued economic growth or reducing health care costs,” Gärtner says. “Hence, messages may be more fruitful if they emphasize the positive consequences of climate protection measures rather than the negative ramifications of inaction.”