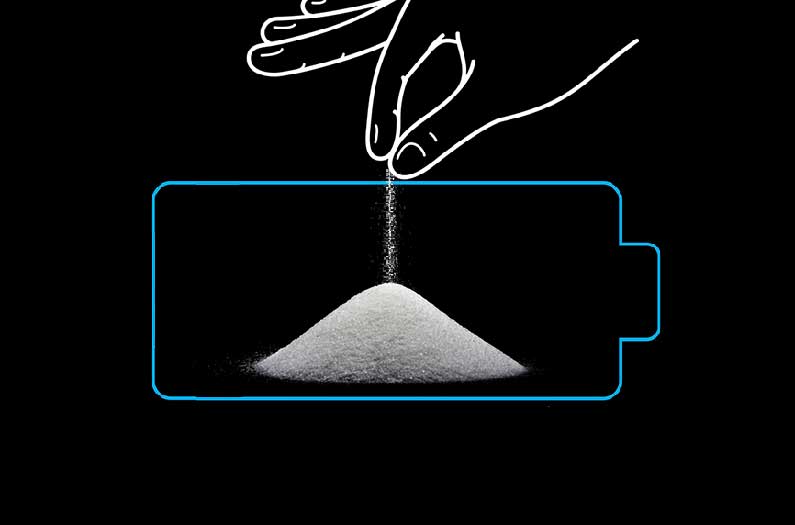 Lithium-sulfur batteries can store 5x more energy than their lithium-ion counterparts and are more environmentally friendly. This sweet maneuver could get them market-ready by boosting longevity.
By Prachi Patel
September 16, 2021

By simply adding a dash of sugar, researchers in Australia have boosted the life of a type of battery that could drive electric vehicles twice as far on a single charge as today’s lithium-ion batteries.

The lithium-sulfur battery can be recharged 1,000 times, the team from Monash University reported in Nature Communications. Other devices made so far, by contrast, usually fail after a few hundred charges.

Lithium-sulfur batteries are a promising successor to lithium-ion for EVs and electric airplanes. They can, in theory, store five times the energy of lithium-ion, which means they would be lighter and go longer between charges. They also use cheaper and more abundant materials.

However, they don’t survive too many charging cycles. That’s because the positive sulfur electrode expands and contracts drastically when it soaks up and releases lithium ions, which makes it weak and fall apart quickly.

On the negative lithium electrode, meanwhile, sulfur compounds deposit like a mossy growth and start consuming the electrolyte. “Eventually, the cell dries up and fails—presenting the biggest challenge to lithium-sulfur battery chemistry,” the researchers write.

The team last year came up with a solution for the first problem. By adding a compound to the positive electrode, they created space between the sulfur particles to allow extra room for expansion.

Now, the researchers have found a way to keep sulfur compounds from escaping the positive electrode, so it cannot blanket the lithium electrode. Their solution was inspired by 1988 geochemistry research showing that the sugars glucose and cellulose bond with sulfur compounds in geological sediments.

The team added a sugar-based compound to the sulfur electrode material. The compound acts like a binder, they found, forming a web-like structure that keeps the in the form of glucose to the electrode.

A prototype battery cell they made had an energy density matching that of commercial lithium-ion batteries, demonstrating promise for real-world use. “In less than a decade, this technology could lead to vehicles including electric buses and trucks that can travel from Melbourne to Sydney without recharging,” said mechanical and aerospace engineering professor Mainak Majumder in a press release.