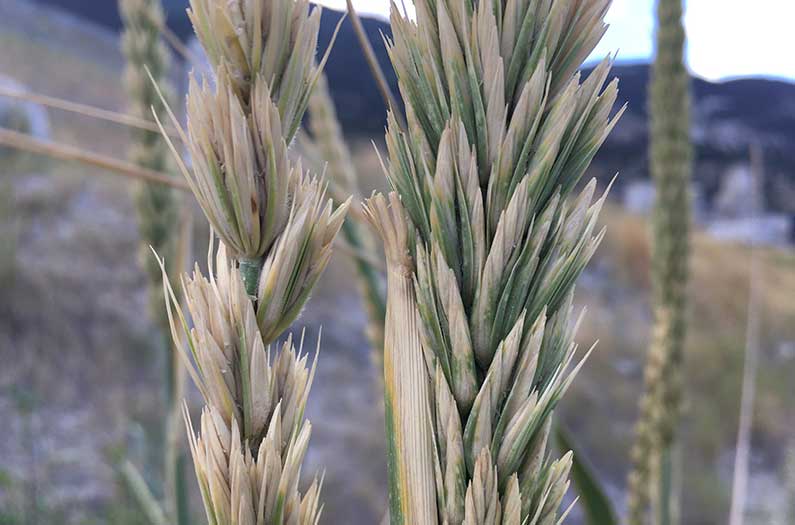 Applied to different cultivars, this discovery has the potential to not only slash nitrate pollution, but also agricultural greenhouse gases
By Emma Bryce
September 10, 2021

Scientists have developed wheat plants that can rein in the nitrogen pollution that leaches from chemical fertilizers, potentially stopping tons of greenhouses gases from entering the atmosphere each year.

The wheat plants, which incorporate a genetic trait from a type of wild grass, ooze compounds from their roots into the soil, which disrupt the enzyme activity of soil microbes. This slows the capacity of these microorganisms to break down fertilizer ingredients and release the resulting pollution into surrounding ecosystems.

This harmful process is called nitrification, and it’s a key reason why fertilizers have such an impact on our planet. Farmers apply fertilizers because they contain ammonia, which helps plants grow. But soil microbes intercept this process, by oxidizing the ammonia to form nitrate, an ingredients that can end up running from soil into waterways, causing dead zones in the ocean, and even polluting drinking water for humans. This process also reduces the availability of readily-usable ammonia for the plants — which sometimes leads to excessive application of fertilizers on farms to compensate for the loss.

What’s more, in the process of oxidizing, the microbes release nitrous oxide, a potent greenhouse gas — 300 times as powerful as CO2 — as a byproduct. This adds significantly to agriculture’s footprint.

Yet, modern agriculture need fertilizers to grow food, and that’s true of wheat in particular, which guzzles up to one-fifth of globally-available chemical fertilizer every year. Since wheat is a staple for millions of people worldwide, its polluting impact is a bind we need to find our way out of. Now, the team of international researchers on the new study think they may have found one solution.

They based their research on a body of work that had explored the capacity of some plants to secrete compounds from their roots and control aspects of soil microbe behavior — a feature called ‘biological nitrification inhibition’ (BNI). Many grasses, like wild rye, have this feature, and it’s linked to a particular chromosome segment in their genes. So the researchers extracted the relevant genetic sequence from wild rye plants, then bred it into a common wheat cultivar.

Then in laboratory experiments, they found that these engineered wheat plants were able to reduce the presence of polluting nitrates in the soil by 30%. The abundance of soil microbes around the plants also decreased by between 20 and 36% in soil samples. And critically, emissions associated with fertilizers were also significantly curbed: nitrous oxide emissions in the incubated growing pods declined by 25%.

Interestingly, the wheat plants with the BNI trait also had improved uptake of nutrients from the fertilizer, presumably because the curtailed microbes had left more of the fertilizer’s nutrients intact for them to absorb. That finding suggested that wheat plants could increase the efficiency of fertilizers and reduce the amount that farmers need to apply, since so much less is lost to microbial breakdown and pollution. What’s more, the increased uptake that the researchers measured also translated to greater biomass and productivity in the wheat.

The study showed that the biggest nitrate declines occurred in mildly acidic soils, which suggests that these wheat-growing environments would be the best candidates for their discovery. But the researchers also think we could expand hunt for BNI traits in grasses that grow in alkaline soils, which may then be suitable for transferral into wheat crops that grow in these conditions, too.

Because wheat is farmed so widely, the researchers believe that if farmers embraced these pollution-busting wheat varieties, the crop could help to significantly bring down agriculture’s greenhouse gas footprint — and could be factored into national climate plans to reach reduction targets.

Soon, the researchers will launch into the next phase of their work: a trial to grow the BNI-equipped wheat plants in India, where they’ll test how well they can tackle fertilizer pollution in the real world. “This points the way for farmers to feed future wheat consumers using lower fertilizer dosages and lowering nitrous oxide emissions,” the researchers say.