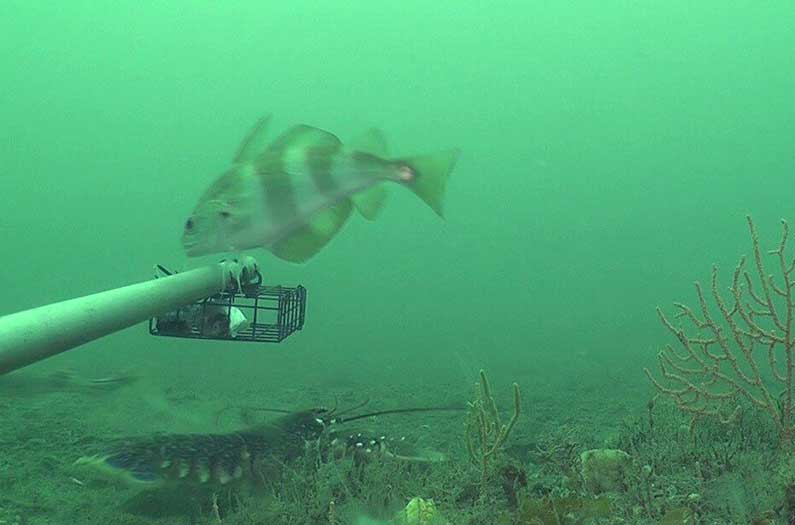 On the southwest coast of the England, near the town of Lyme Regis, scientists found that fish populations boomed when reefs were protected, even though some kinds of fishing continued.
By Warren Cornwall
September 15, 2021

As conservationists campaign to protect more ocean habitat, one sticky question is how strict those protections should be. Is it best to make large swathes of ocean completely off limits to activities such as fishing? What about less destructive fishing methods? Is it possible to have a “checkerboard” with fishing banned just in select spots?

Now, a bay in southwest England appears to be flourishing with a middle-ground approach. In waters off the picturesque town of Lyme Regis, along the English Channel, an area-wide ban on some of the most destructive kinds of fishing has led to a near quadrupling in populations and diversity for previously sought-after fish species, while still leaving room for less harmful fishing practices.

The results show “how the compromise between conservation and fisheries management can affect whole ecosystems, local habitats and those who rely on them,” said Bede Ffinian Rowe Davies, a marine ecologist and PhD student at the nearby University of Plymouth who is studying the ecosystem.

The issue of how best to protect marine landscapes has taken on new importance amid mounting fishing pressures around the globe, and a push to protect 30% of ocean habitat by 2030. The United Nations last year warned that 34% of the world’s fisheries were being overfished.

But not all protections are the same. Scientists have documented the shortcomings of some so-called “marine protected areas” or MPAs – the most common tool for guarding marine ecosystems. A global survey found a “high frequency of ineffective MPAs” that showed little improvement in the total amount of fish. There are “paper parks” not backed up by regulations or enforcement. Some scientists have found that areas still allowing some kinds of fishing show few benefits.

In the United Kingdom, most MPAs shield particular features – such as underwater rocky outcroppings – rather than the entire area. But in Lyme Bay on the southwest coast, the government, in consultation with local stakeholders including fishers and environmentalists, settled on a different approach. To protect corals and other organisms that grow on the rocky reefs, in 2008 they declared an entire 206 square kilometer area off limits to some of the most destructive fishing methods: scallop dredging and bottom trawling, both of which involve dragging nets along the seafloor. At the same time, they left the door open to other kinds of fishing, including “potting” with fixed cages used to lure slower-moving creatures on the sea floor, such as lobsters.

To see whether this whole-site approach made a difference for fish populations, scientists took to the water. Each year, at 18 different locations both inside the MPA and nearby, they put out small cages baited with mackerel and used submersible video cameras to see what came into view of the cage over 30 minutes. Back at the office, they watched videos and counted fish to see how things were changing year-to-year. “It’s a lot of staring at screens,” said Davies.

Read:  Climate action pays for itself a lot sooner than you think

Over 11 years, the scientists saw an explosion both in the total number of fish and the number of fish species when it came to the types of fish targeted by the fishing industry. Inside the MPA, the video surveys showed the number of such “exploited” species rose by 430% and their overall populations grew by 370%, according to a study published September 8 in the Journal of Applied Ecology. Fish that enjoyed a population surge included a kind of wrasse, the small-spotted catshark, and the thornback ray.

The population boom reached nearby waters that weren’t in the protected zone as well, though not as dramatically. Davies suspected that might be a spillover effect from rising fish production inside the MPA.

The results suggest that blanketing an entire MPA with fishing restrictions is more effective than a checkerboard of protections, said Davies. “Just protecting one habitat in Lyme Bay would have been less beneficial. Because the species that are interacting in the rocky reef, for example would also be interacting with the species that are in the sedimentary habitat nearby.”

But the surveys also suggest that restricting only some kinds of fishing benefits only some kinds of marine creatures. There was no change in the populations of invertebrates, some of which are captured by potting, which was still allowed in the MPA. That includes brown crab, European lobster, and whelks, a kind of edible sea snail.

While the study doesn’t show whether the catch levels for those species are sustainable, Davies said it was a good sign that the populations were holding steady, even as potting activity appeared to increase. Davies also said he believed that allowing some kinds of fishing to continue was important for winning local support for the MPA. “As soon as someone feels ownership of something they’re far more likely to be proactive in its support and its development,” he said.