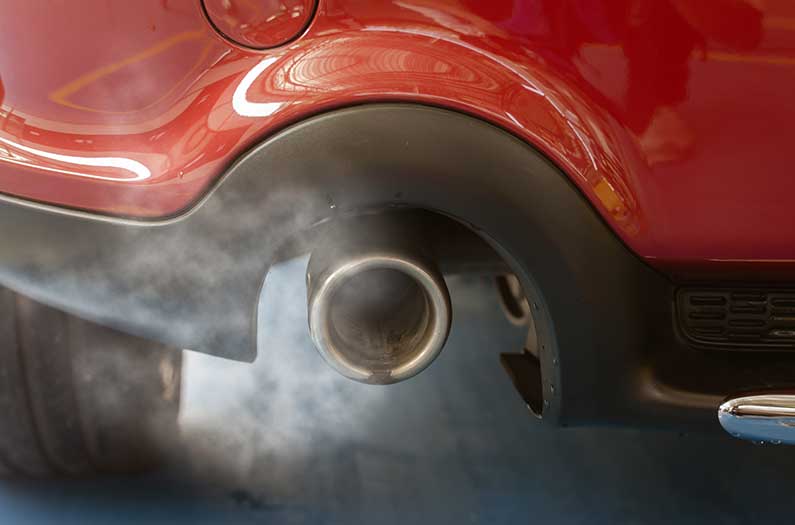 Using existing technology downscaled for cars, we could harvest millions of tons of CO2 emissions and waste water and reroute it to urban farms
By Emma Bryce
September 24, 2021

A single car pumps out 4.5 tons of carbon dioxide into the atmosphere each year. That’s environmentally destructive, never mind the enormous health impacts. But, it’s also a waste of a hugely valuable resource. What if we could capture those emissions—and use them to grow food?

Researchers have produced a white paper which delves into this possibility: they suggest that using existing technologies, and scaling them down for cars, we could siphon off tons of CO2—and huge amounts of waste water—from exhaust pipes and reuse it in indoor farms. That could help solve two of humanity’s biggest challenges: pollution and the need to increase food yields.

We typically think of CO2 as a dirty emission that we should try to eradicate. But it also happens to be essential for several industrial processes, many of which are related to food. We use carbon dioxide to carbonate drinks, to package produce, and in the production of ice that’s needed to keep food fresh.

CO2 is also a key ingredient in the naturally-occurring process of photosynthesis. In fact, in artificial farming environments such as urban greenhouses, which now account for a growing share of many countries’ food production, farmers have found a way to increase crop production by enriching the air with higher amounts of CO2. It’s become an essential ingredient to speeds up plant growth, and increases yields in modern agriculture.

But that comes at a cost. Greenhouse-grown fruits and vegetables require an estimated 2.81 kilogram equivalent of CO2 to produce just one kilogram of food. Alarmingly, that’s generated mainly by burning fossil fuels. These farming operations require vast amounts of water too.

It just so happens that alongside CO2, the average passenger vehicle also produces about 21,000 liters of water each year, as a byproduct of combustion. The researchers were driven by the idea that both these resources could find a much better use on urban farms. So, they built a rough design for a carbon- and water-harvesting system for a car, then carried out a series of simulations to see how well that system would work in the average vehicle.

This was designed around the aim of extracting CO2 and water from the exhaust stream, a process that requires energy to power different stages of cooling and CO2 adsorption. That energy could be provided by the waste heat generated by a car’s engine, the researchers explain, which would be used to drive a small turbine to power the various processes. First, the exhaust stream would be cooled to enable the condensing and collection of water. The cooler stream of CO2 gas would then be piped to a set of adsorption units to be captured. Further compressing the CO2 would transform it from a gas to a liquid, making it easier and more efficient to store.

This liquid would then be siphoned into a removable storage cartridge, “which will be added [to the engine] as a detachable item, easy to insert and remove,” explains Maria Barrufet, professor of petroleum engineering at Texas A&M University, and lead author on the study. Drivers could remove this cartridge and empty it at various distribution points—perhaps at gas stations—from where the precious resource would be gathered for use in the agricultural industry.

The early-stage results are promising: “Simulations show that the entire process could be done by using the wasted thermal energy from the car’s exhaust, about 1/3 of the energy delivered from the combustion of gasoline,” says Barrufet.

She adds that currently, all the components exist for such a system to work, but only for carbon-capture at extremely large scales, such as power plants. The challenge would be to “scale the system down so that it fits inside a passenger car engine,” Barrufet explains. Since the work is still at the early exploratory stages, there are many questions still to answer—such as how many cooling and adsorption cycles would be needed to properly capture the water and CO2, how to design cartridges that don’t add too much to the weight of the car, and the infrastructure that would be needed to effectively distribute these resources from cars to farms.

Going forward, these are the core issues the researchers hope to investigate in new research that properly interrogates the potential.

In the meantime, the need for alternatives remains clear. More than 50% of the world’s population lives in cities, which are supplied by an increasing number of urban greenhouse farms. “Effective greenhouse production of fresh produce requires tremendous amounts of water and external sources of carbon dioxide to support plant growth,” say study co-authors Elena Castell-Perez and Rosana Moreira, researchers in food engineering, processing, safety and sustainability at Texas A&M University. “Currently, greenhouse operations burn fossil fuels to produce the required CO2. The proposed intervention would eliminate this step.”

The technology may still be a while off. But all important innovations start with a bold idea. And this one—growing food by reducing air pollution, and tackling climate change—certainly seems like one worth watching.

Barrufet et. al. “Capture of CO2 and Water While Driving for Use in the Food and Agricultural Systems.” Circular Economy and Sustainability. 2021.