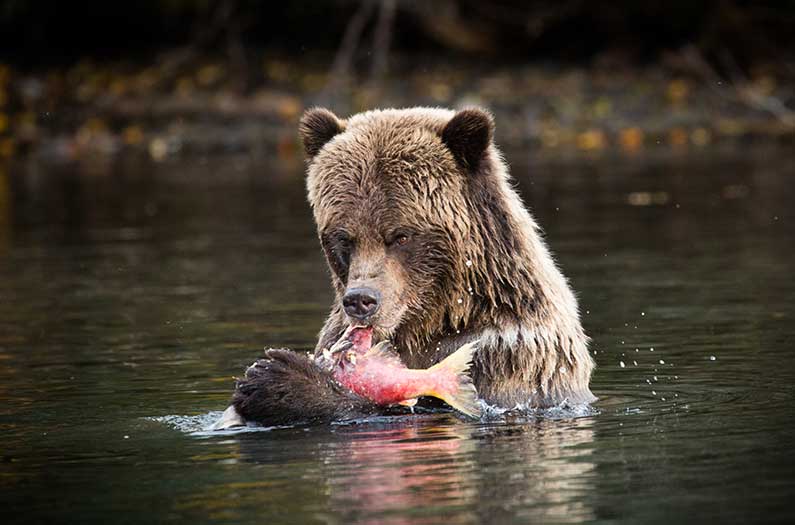 Finding a new formula for sharing salmon between people and bears
Scientists and the Wuikinuxv Nation in British Columbia form an unusual partnership to study how native fishers and grizzly bears can share scarce salmon runs.
By Warren Cornwall
September 1, 2021

When sockeye salmon return from the ocean, everyone wants a piece. Gulls feast on carcasses littering riverbanks. Grizzly bears devour the fatty bellies and brains of fish they pluck from the water. Human anglers prize sockeyes for their rich, dark-pink flesh.

But what if there aren’t enough fish to go around?

The Wuikinuxv Nation on the coast of British Columbia, Canada teamed up with scientists in an unusual collaboration aimed at striking a balance between the needs of people and the needs of grizzlies when divvying up the annual supply of spawning salmon. The results illustrate how science can combine with the values of an indigenous people to manage scarce natural resources.

“We’re trying to think about a catch that wildlife might need and a catch that local people might need,” says Megan Adams, a wildlife biologist who led the research through the Raincoast Conservation Foundation, a conservation science non-profit in British Columbia.

The traditional fishing grounds of the Wuikinuxv (pronounced “Oh-wee-key-no”) Nation once flooded with as many as 3 million sockeye salmon in a year, as the fish moved up Rivers Inlet to nearby spawning grounds around Wuikinuxv Lake, 400 kilometers northwest of modern-day Vancouver. The annual migration made the fish central to Wuikinuxv diet and culture.

But the Rivers Inlet sockeye run collapsed starting around 1970. In 1999, fewer 10,000 sockeye returned to spawn. Decades of fishing pressure from commercial fleets and changing ocean conditions were prime suspects.

Today, the fishery has rebounded a bit, to an average of around 200,000 fish. There is no commercial fishery. Wuikinuxv anglers catch a small number of fish for ceremonial and subsistence purposes. The salmon remain a linchpin of the diet of grizzly bears there.

But it wasn’t clear how many fish people could catch before it took a toll on the bears. So officials with the nation teamed up with scientists from the research foundation. “Instead of managing resources with human use as a focus, we need to steward with the ecosystem as the main priority,” said Danielle Shaw, Wuikinuxv Chief Councillor and former head of the nation’s stewardship department, who took part in the research.

To help answer their questions, scientists turned to bear hair. Over seven years, starting in 2013, Adams, in the company of Wuikinuxv Nation representatives, collected tufts of hair caught in strands of barbed wire set around bait that attracted the bears. A DNA analysis enabled Adams to distinguish between 51 different grizzlies. Then, she and her colleagues examined the hair for molecules associated with different diets. Certain levels of carbon-13 and nitrogen-15 are a fingerprint for food that comes from the ocean, including sockeye salmon. The results showed that salmon made up nearly two-thirds of the bears’ diets.

Looking at the relationship between bear numbers and their diets, and the fluctuations in salmon numbers over the decades, the scientists calculated how many sockeye the nation’s fishers could catch each year without causing a long-term depletion of the salmon run, and without causing a major downturn in bear numbers. They found that in a typical year, limiting the catch to 45,000 fish – approximately 10% below the sustainable limit – would result in 10% fewer bears in the area than if the Wuikinuxv didn’t catch any fish at all, according to a recent paper in the journal Marine and Coastal Fisheries.

In conversations with Wuikinuxv Nation members (the nation totals approximately 300 people), there was a desire to find a balance between the needs of bears and of people, Adams said. Catching 10% fewer fish while having 10% fewer bears was deemed consistent with that, she said. It’s also higher than the 30,000-fish catch target the nation now uses.

It’s rare to develop fishing targets in collaboration with an Indigenous people, and with an eye toward the needs of other animals, said Taal Levi, an Oregon State University ecologist who helped with the mathematical modeling in this research. Fisheries often target the maximum limit that can be sustained over time, and with little consultation with native peoples. Levi touted the new approach as a model for other fisheries.

“I think it’s very unusual,” he said. “Nobody just darted in and said ‘Hey, we want to do this project.’ It’s co-developed. They (the scientists) really are quite dedicated to lots of meetings and living in villages and getting insights about what people really want to learn and what their problems and issues are.”

The work between scientists and their nation benefitted both sides, said Jennifer Walkus, an Wuikinuxv Nation Elected Councillor and former fisheries manager for the nation, and an author of the study. “When the nation drives the research through an integrated lens, it allows scientists to escape the silos they often find themselves in,” she said. “We can learn more from each other when we work together.”