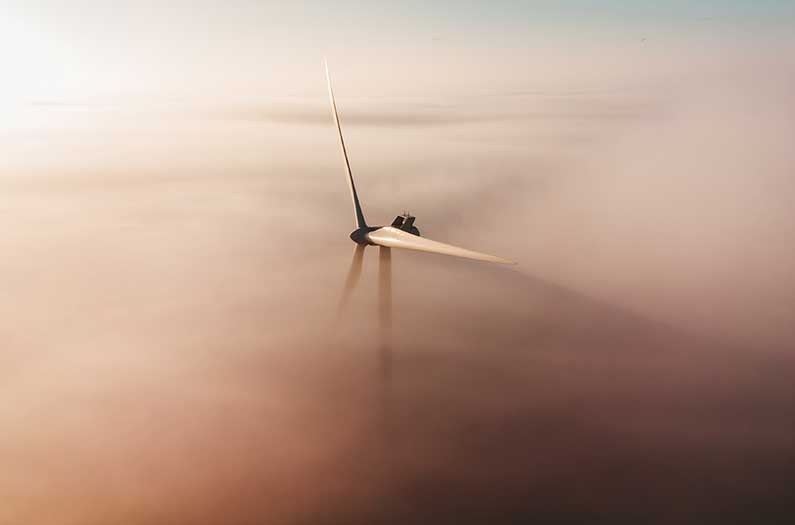 There’s enough wind to power the globe. But exactly how much do we need to catch to rein in carbon?

We need to expand wind energy by at least 10 times in the next few decades in order to limit global warming in 2100
By Sarah DeWeerdt
September 28, 2021

Aggressive development of wind energy infrastructure now could reduce global warming by 0.3-0.8 °C at the end of the century, according to a new study.

The findings indicate that wind-derived electricity cannot keep warming below 1.5 °C on its own—but, in combination with decarbonization of other sectors of the economy, could be the added component to enable meeting the Paris Agreement’s ambitious goal.

Accomplishing the necessary rollout is feasible, the study suggests—but far from certain. “We know that increasing wind energy deployment takes political will even though onshore wind energy is currently the cheapest form of electricity generation,” says Rebecca Barthelmie, a wind energy researcher at Cornell University, in Ithaca, New York, who conducted the study along with Sara Pryor, also at Cornell.

The researchers gathered data from multiple countries and international agencies to build a picture of recent trends in the wind power industry, how much wind energy expansion is feasible in the coming decades, and how expanded use of wind energy could help meet emissions reduction goals.

Over the past two decades, the total amount of power wind turbines can produce grew at 14% per year, the researchers report in the journal Climate. Wind turbines are now deployed in 90 countries around the world, with a total of 742 gigawatts (GW) of installed capacity. Wind energy production reached 1,273 terawatt hours (TWh) in 2018 and provides about 6-7% of the global electricity supply.

Various countries have made pledges under the Paris Agreement to expand wind power in the coming decades. If these pledges are realized, wind energy will reduce warming by 0.3-0.4 °C in 2100, the researchers calculated.

But wind energy is currently expanding more than twice as fast as these pledges indicate. For example, 60 GW of wind energy installed capacity was added in 2019, and 92 GW in 2020—much higher than anticipated despite the pandemic.

With this in mind, several agencies have modeled even more ambitious scenarios that would see installed wind energy capacity expand about twice as fast as it currently is and reach more than 10 times its current level by 2050.

These scenarios would reduce eventual warming by 0.7-0.8 °C. That’s not enough to keep warming below the 1.5 °C threshold if we otherwise stay on our current emissions trajectory.

Accelerating the deployment of wind energy to this extent is within the realm of feasibility, but will require major efforts to establish new supply chains, expand wind turbine manufacturing capacity, and streamline permitting and other aspects of wind energy installation, the researchers say.

Still, Barthelmie sounds a note of optimism. “We have seen tremendous technical, engineering and scientific advances in onshore wind and we are building capacity in offshore wind (and even floating wind) bringing their costs more into a competitive region,” she says. “It means we can expand wind energy to levels that can make a significant impact on our emissions of greenhouse gases and still have a stable, low-cost electricity supply.”

Photo by Sander Weeteling on Unsplash