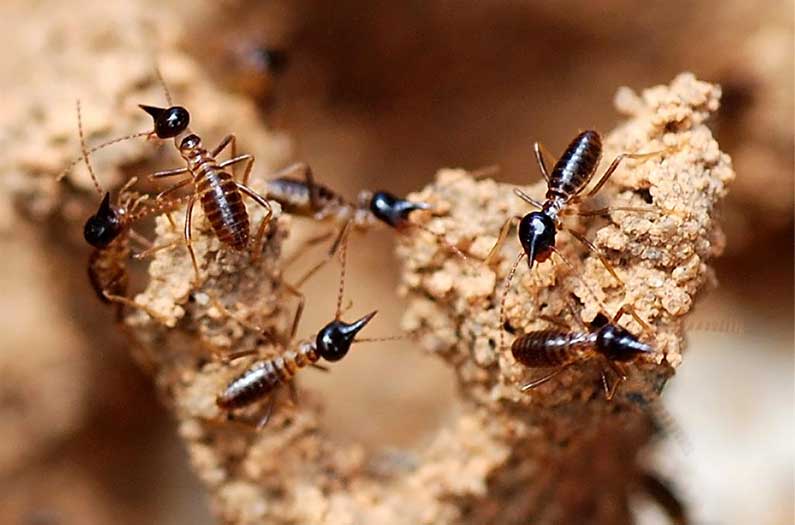 Climate change and declining insect populations could alter how wood rots in forests around the world, scientists say. The implications are big.
By Warren Cornwall
September 8, 2021

When tallying up the myriad things sending planet-warming gases into the atmosphere, don’t overlook bugs.

While humans drive up the overall levels of greenhouse gases by burning fossil fuels, a variety of natural forces shape how the planet “breathes” – absorbing and releasing carbon dioxide, methane and other heat-trapping molecules. Plants and oceans soak up CO2. Forest fires and volcanoes release it.

Now, scientists have added another important but neglected piece of the puzzle: decaying trees and the insects that feed on them. In a globe-spanning experiment, researchers have found that decaying wood releases more carbon each year than what humans produce by burning fossil fuels. Insects drive nearly a third of that activity by speeding wood decay.

“The study highlights the role played by dead wood in the global carbon cycle and the functional importance of insects in the decomposition of wood,” said Jörg Müller, head of research at Germany’s Bavarian Forest National Park. “In this way, we are closing another gap in the global modelling of carbon cycles.”

It’s no secret that rotting wood releases carbon. But much less was known about how quickly it happens around the world and what factors influence it. Such information is important as scientists work to understand and model the ebb and flow of greenhouse gases in a world being reshaped by climate change. So Müller and 73 other scientists teamed up create a global map of how wood rots.

To do this, researchers took baton-like half-meter long sections from 142 different native trees at 55 different sites on every continent but Antarctica, selected to provide a range of latitudes, temperatures and precipitation levels. They laid the wood out in the forest and tracked its fate for up to three years.  To monitor the effects of insects, some samples were stored in insect-proof mesh boxes, while others were left exposed.

Using the forest as a laboratory came with its share of headaches. In one location, a test site had to be shielded from passing elephants. Others were struck by forest fires or floods.

Despite the difficulties, the researchers emerged with enough data to create a detailed dead wood atlas. All told, they found that decaying wood releases around 10.9 billion metric tons of carbon per year, approximately a seventh of all the carbon trapped in dead wood around the world, and equal to 115% of annual carbon emissions from fossil fuels, according to the study published in Nature on Sept. 1.

But what happens to a tree when it falls in the woods depends a lot on the location.  Most of the action is in the tropics. The scientists found that 93% of the carbon is released from tropical forests, thanks to a combination of more wood, warmer temperatures and an abundance of wood-eating insects such as termites. In one year, wood at test sites in the tropics typically lost nearly a third of its mass. By contrast, in the boreal forests of the far north, it decayed at just 3% each year. All told, insects played a role in 29% of the carbon released from decaying wood, largely in the tropics.

Climate change could make dead wood an even bigger factor. The experiment revealed a strong connection between warmer temperatures and faster breakdown of wood, likely because microbes and insects become more active as they warm. As the climate warms further, the “results indicate that wood decomposition rates are likely to increase,” the scientists write.

The future of dead wood could also be influenced by the decline of global insect populations. Insect numbers on land have fallen by around 9% per decade, according to a 2020 paper in Science. To understand the implications for wood decomposition, however, would take a more detailed picture of how different organisms interact with each other as they consume wood, according to the researchers.

The new research shows yet another way the shifts in temperature and biodiversity could ripple through key global systems. “Both climate change and the loss of insects have the potential to alter the decomposition of wood,” said Sebastian Seibold, lead author of the new paper, and co-director of research at Berchtesgaden National Park in Germany. “And therefore, the carbon and nutrient cycles worldwide.”