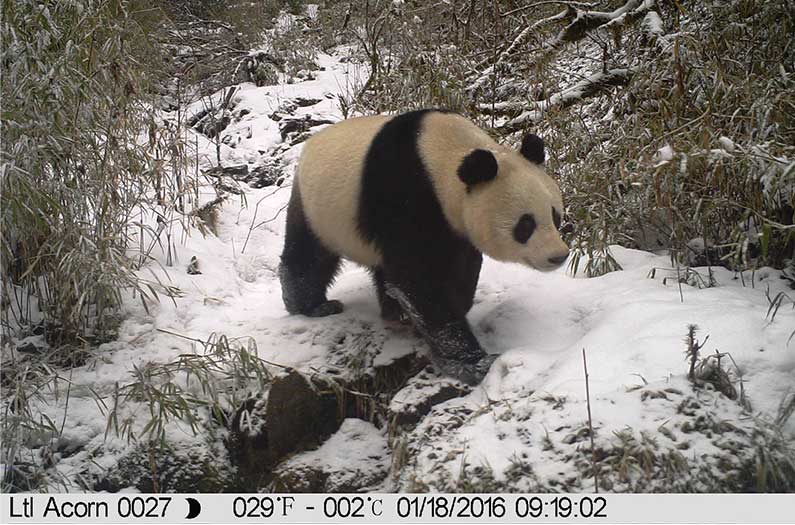 Is there such a thing as too much good habitat?

Panda researchers find that gene flow among pandas in a Chinese wildlife reserve is better in places with gaps in the bamboo forest.
By Warren Cornwall
September 29, 2021

It might seem axiomatic that for an endangered species, more habitat is better.

But scientists studying giant pandas in the mountainous bamboo forests of central China say a close look at the genetic profiles of the animals there suggests that’s not always the case.

The results have implications for how conservation scientists think about what targets should be set for habitat protection or restoration to be effective, says Thomas Connor, an ecologist and postdoctoral student at the University of California, Berkeley, who led the research.

“I think the results suggest we should probably be moving away from this kind of maximalist viewpoint of either trying to reduce habitat fragmentation totally or trying to absolutely restore wilderness or 100 percent habitat,” says Connor, who conducted the research while earning a PhD at Michigan State University (MSU).

Habitat destruction by humans is frequently blamed for the decline and extinction of species in the midst of the sixth great extinction event in Earth’s history. But there is disagreement among scientists about details of how changing habitat conditions influence a species’ health.

Generally, the more that animals in a species intermingle and avoid getting cut off from potential mates, the more genetic diversity within a population and the lower the risk of inbreeding. But does pristine habitat best promote the flow of genes? And is there a threshold at which habitat loss starts to take a major toll?

Pandas offer a potential test case for answering these questions. The charismatic black and white bears are picky about their habitat, dwelling only in bamboo forests in central China. There, hunting and deforestation have driven populations down to approximately 2,000 animals. While their numbers are on the rebound, they are still considered “vulnerable” due to their relatively small numbers, habitat fragmentation, and the threat climate change poses to bamboo forests, according to the International Union for the Conservation of Nature.

So a team of scientists under the supervision of MSU’s Jianguo “Jack” Liu, a decorated sustainability scientist, set out to see if they could trace how gene flow was influenced by variations in habitat conditions in China’s 2,000 square kilometer Wolong Nature Reserve.

To do that, teams spent two years scouring the forest for fresh panda poop. By studying DNA in the feces, the scientists identified 142 individual pandas, traced how they were related to each other and looked for signs of inbreeding. The researchers then overlaid this genetic map on a detailed computer model of the habitat conditions in the reserve. A statistical analysis delved into how the amount of panda habitat, and different landscape features – rugged cliffs, roads, farmlands, villages and other breaks in the forest – were correlated with how DNA varied from one bear to another.

Surprisingly, the results showed that the greatest genetic diversity didn’t occur where the bamboo forest was entirely intact and continuous. Rather, gene flow among bears appeared to peak in places where approximately 80% of an area was prime bear habitat, according to results published September 20 in the journal Conservation Biology.

The results don’t answer why this is happening. But Connor suspects that bears in uninterrupted habitat might have such a comfortable life that there is little incentive to wander. These stay-at-home bears would be less likely to go looking for other habitat and encounter mates along the way. “They’re not really forced to (move) until there’s some level of not being able to support those individuals here,” says Connor. “That sort of forced dispersal is what was driving the gene flow.”

The researchers note that burgeoning populations good habitat can also force animals to go in search of new homes. It’s not clear if panda densities were too low to trigger this behavior at peak habitat levels.

Connor cautions that the habitat conditions that maximize gene flow won’t be the same for different species, or even for other populations of panda bears. But he does think the results could mean that a variety of species – not just pandas – can thrive even with some damaged habitat. That, says Connor, might be a good thing. “I really hope that it’s going to be kind of a hopeful message,” says Connor. “Environmental groups doing restoration are not going to totally write off areas that seem unworkable to get back to pristine conditions.”