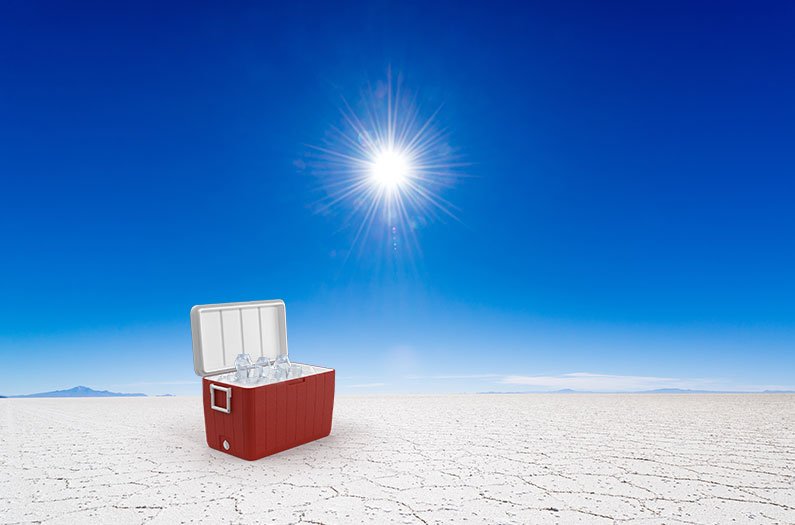 Low-cost and low-emission cooling systems based on this approach could be used for air-conditioning and food refrigeration in remote regions or off-grid communities
By Prachi Patel
September 23, 2021

For many people living in sunny, searing hot climates, air-conditioning is either a luxury or simply not available. A new electricity-free cooling system driven by salt and sunlight could help.

Reported in the journal Energy & Environmental Science, the new technique relies on a cooling effect produced when certain salts are mixed in water. The salt can be regenerated for reuse by evaporating the water using solar energy.

Low-cost cooling systems based on this approach could be used for air-conditioning and also to refrigerate food. “It is suitable to provide cooling power for remote regions or off-grid communities and has a potential to meet on-demand cooling need by the impoverished,” says Peng Wang, an environmental science and engineering professor at King Abdullah University of Science and Technology.

Reducing the energy use of cooling technologies is important for the world to meet climate targets. Cooling living spaces already accounts for 10 percent of the world’s electricity consumption, a share slated to get larger as average global temperatures rise. According to the International Energy Agency, energy demand from air conditioners will triple by 2050, requiring as much electricity as the United States, the EU and Japan can produce today. Plus, many communities in hot, arid regions of the world also suffer from lack of reliable weak power infrastructure.

Wang and his colleagues wanted to develop an inexpensive cooling technology that does not require electricity. Their design is based on a natural phenomenon in which energy is absorbed as salt crystals dissolve in water.

After experimenting with different salts, the researchers decided on using ammonium nitrate because of its high solubility and effective cooling power. It is also inexpensive and is produced on a large scale for use in fertilizers.

Their proof-of-concept system consists of a metal cup placed inside a polystyrene foam box. As the salt is gradually dissolved in water in the metal cup, its temperature fell from a room temperature of about 25°C to around 3.6°C. The temperature remained below 10°C for 8 hours and under 15°C for over 15 hours, sufficient for food storage.

To recover the salt, the researchers put the salt solution in a tall container made of a material that absorbs a large range of the solar spectrum. They wrap the container with a water-wicking fabric, and the device is floated on top of the salt solution. As the solution travels up the fabric, it warms up and evaporates, resulting in ammonium nitrate salt crystals growing on the container’s outer wall.