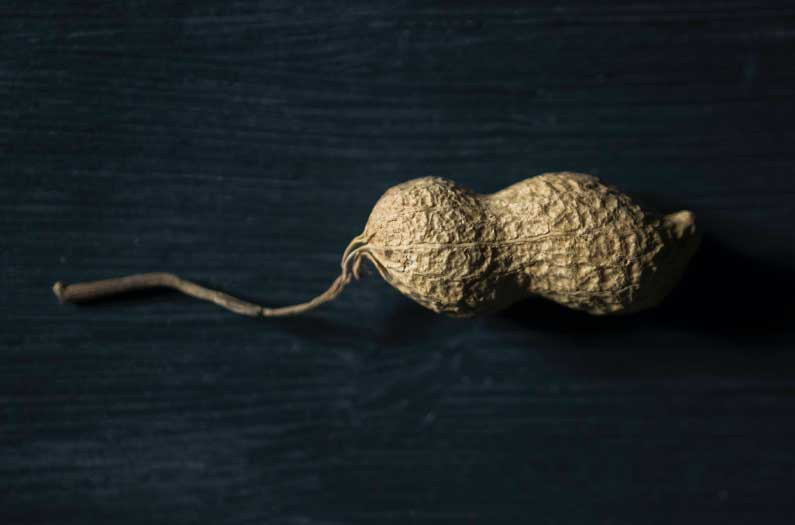 The presence of wild peanut traits in modern crops has enabled farmers to cut back on fungicides and other chemical treatments, and even reduce fuel use and emissions.
By Emma Bryce
September 17, 2021

The global distribution of genes from a single peanut variety has had a profound legacy on our food systems—providing immeasurable food security, and spreading its pest- and disease-resistant traits around the world.

These are the findings of a recent study, which traced the genetic contributions made by the species in question—and in the process revealed the huge benefits of the international seed exchange in increasing the genetic diversity of our crops and making our food systems more resilient.

But the very exchange that made this spread possible is now under threat—and with it, we risk losing the untold adaptive benefits of seed-sharing in a climate-threatened world, the researchers warn.

Academic institutions have for decades shared seeds for crop breeding and improvement. But no one has ever explicitly ever set out to try and measure the social and environmental impacts of this collaborative effort—until this study came about. The lead researchers, who study the lineages of wild peanuts, chose to look into the genetic lineage of a particular peanut variety called A. cardenasii GKP 10017, which turned out to have an interesting backstory.

First collected from Bolivia in 1959, this wild species was subsequently bred with another peanut species to produce a hybridized plant that contained the wild one’s most favorable traits. From the 1960s onwards, that peanut variety was then freely propagated and shared between seed banks, crop research institutes, and breeding programs around the world. Over the course of this process, the traits of that original wild variety have been bred into dozens of different farmed peanuts—including some of the most commonly-cultivated species we eat today.

But along the way, researchers lost track of the path those wild genes had taken and exactly where they’d ended up. This was the challenge that the researchers on the PNAS paper decided to take on. Over the course of a decade, they trawled through academic references and used DNA-tracing methods to build a map of how far the genes had spread. “The DNA-based methods are like ’23 and Me’ for peanuts,” says David Bertioli, plant scientist at the University of Georgia, and lead author on the research. “This was used to detect characteristic DNA sequences in peanut varieties which came from the wild species.”

What they found was some extremely well-traveled peanut genes: the traits of that wild A. cardenasii are now present in over 250 peanut cultivars in 30 countries—occurring in peanut crops growing everywhere from Sudan, China, Indonesia, and South Africa. What’s more, they discovered that it has had a widespread social and environmental legacy.

That original wild Bolivian peanut species had been selected, in the first place, because it carried traits that make it resistant to both pests and disease. Now those traits are delivering benefits in modern domesticated cultivars today. Most strikingly, the researchers found that the presence of these wild peanut traits in modern crops have enabled low-income and smaller-scale farmers to cut back on the amount of fungicides they apply to their fields, crucially reducing farming costs.

Meanwhile, on larger-scale peanut farms, the reduced need for chemical treatments, along with reductions in fuel use and emissions (as fungicides didn’t need to be transported and sprayed across the farms), will have led to considerable environmental savings, the researchers estimate. Drawing on their resilient gene pool, domesticated cultivars will have also grown more productive, generating higher yields and greater earnings for farmers. It’s not too much of a stretch to conclude that the versatile and resilient progeny of that original wild peanut crop have also boosted food security in many countries around the world, with their protein-rich legumes.

All this derived from one breeding experiment—and a lot of international collaboration. But now, that’s a dying tradition, the researchers warn.

“Decades ago biodiversity was considered a common good, it was generally known and agreed that exchanging seeds generated benefits for all,” Bertioli says. But in the 1990s, laws and treaties were put in place to protect nations’ biodiversity, and to stop some countries exploiting and capitalizing on the biodiversity of others. A consequence of these restrictions is that they’ve also made it much harder to collect and share seeds for research purposes. Overall, these changes have stymied the international culture of sharing and collaboration that enabled those wild peanut genes o spread, Bertioli explains.

Yet this culture is increasingly what we’ll need to meet future challenges. Worryingly, many of the staple crops our food systems are built on have extremely limited genetic diversity—and in some species that diversity is also declining. Crop wild relatives like that original peanut plant contain a vast genetic repository—and being able to find and share these discoveries is crucial to the future of food security. We need this genetic insurance especially in the evolving and unpredictable face of climate change.

Using the peanut’s wild journey as a hopeful example of what can be achieved, the researchers call for more openness and seed-sharing going forward. “Since the pests and diseases of crop plants are constantly evolving and globally mobile, and climate is changing, this is an indispensable strategy to ensure food security and improve sustainability,” Bertioli says.