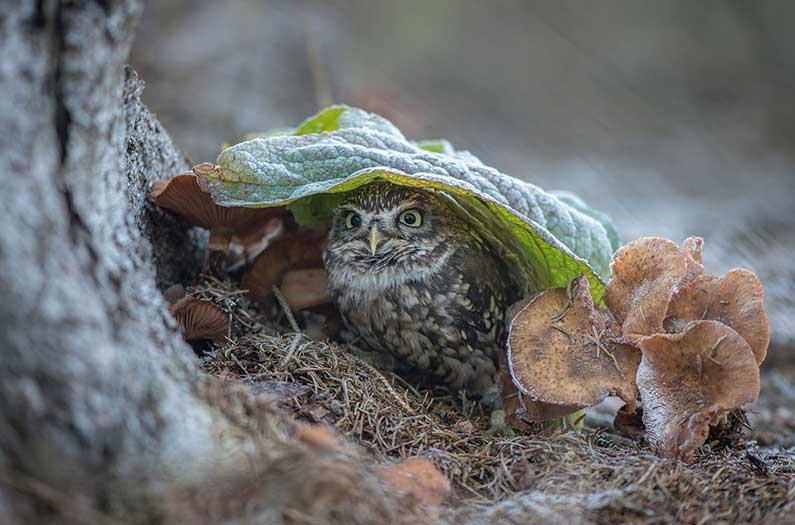 With data from over 1,000 sensors across Europe—and running as much as half a quadrillion calculations per second—the team has created exquisitely detailed maps pinpointing cool habitat oases in a warming planet
By Warren Cornwall
October 13, 2021

When scientists measure how temperatures are rising around the world, much of the data literally goes over the heads of many plants and animals.

While organisms often spend their lives within a few centimeters of the ground in shaded forests, temperature measurements often come from weather stations perched 2 meters in the air and away from the shade.

Now, scientists have brought these temperature readings down to eye-level for critters. Harnessing supercomputers and a network of sensors, the researchers have produced a remarkably detailed picture of ground-level temperature conditions across Europe.

The new maps promise to improve forecasts of how a changing climate might affect different species and enable conservationists to pinpoint cool habitat oases in a warming planet. Already, the research is highlighting the power of trees to moderate weather conditions, keeping things cooler in the summer and warmer in the winter, in some cases by as much as 10° Celsius compared to nearby areas without trees.

Summer heat waves are “strongly moderated below the tree canopy, which is increasingly important considering global warming,” says Koenraad Van Meerbeek, an ecologist at KU Leuven, a university in Leuven, Belgium, who helped lead the research.

Weather stations are a critical tool for tracking temperature near the Earth’s surface. To ensure such measurements are comparable from one place to another, researchers work to ensure the instruments are deployed in a standard way that avoids being skewed by outside factors such as shade from trees and heat radiating from sun-warmed ground. As a result, these stations are perched above the ground and away from trees.

These measurements, however, can obscure critical variations in temperature that affect what organisms actually feel, because many plants and animals spend their lives in forests close to the ground, says Van Meerbeek. To tackle the problem, in 2018, he and researchers at other European universities launched SoilTemp. Using data from more than 12,000 instruments in 60 countries, they set out to map temperature and moisture readings from the soil and near the ground surface around the world.

As a first step in what they hope will become a globe-spanning map, the scientists gathered data from 1200 sensors covering near-ground temperature readings from across Europe.

Such readings, however, represent just a fraction of the land surface. They don’t reflect the myriad microclimates that cover every corner of the continent, ranging from chilly, tree-lined valleys to sun-baked fields. To create a more detailed picture, the researchers paired 20 years of near-ground temperature readings with detailed digital maps of Europe containing information about a variety of factors that can influence temperature, including the amount of tree cover, whether the trees were deciduous or coniferous, the elevation, whether there it was on a hillside, which direction the slope faced, and annual precipitation.

They fed the data into a supercomputer in Leuven capable of running approximately half a quadrillion calculations per second and programmed to tease out the way different variables influenced temperature. After 1.5 months of non-stop calculations, the machine produced a map estimating how forest temperatures differed from non-forested temperatures continentwide, broken down to boxes 625 square meters large – less than a tenth of a typical city block.  “It was a masterpiece,” says Van Meerbeek.

The results revealed that tree cover can make an enormous difference in temperatures. Summer temperatures in European forests are 2°C lower on average than in treeless areas, while in the winter the forests are 2°C warmer – the equivalent of 3.6° Fahrenheit, according to a paper published Oct. 3 in the journal Global Change Biology. In some places the differences were more dramatic, with forested areas as much as 10°C cooler in the summer and 12°C warmer in the winter compared to nearby areas without trees.

The new detailed maps could aid scientists trying to understand what areas are hospitable for certain organisms to live, based on what temperatures they can tolerate. “This is a real scientific and technical breakthrough that will undoubtedly improve predictions about the distribution of forest species,” says Stef Haesen, the paper’s lead author and a PhD student at KU Leuven.

Those insights could also help identify areas that provide cooler conditions that could serve as a refuge for certain species as temperatures rise in the future, says Van Meerbeek. Estimates of temperature on the forest floor might also improve the understanding of other biological processes, such as how quickly leaves will decompose, which can influence how much carbon a forest releases into the atmosphere each year.

In the future, Van Meerbeek hopes to harness the research to forecast how a warmer future climate will influence forest temperatures and the places where different species can thrive. But that, he says, will take even more sophisticated computer modeling. For instance, they won’t be able to use existing forest maps, because the areas where certain trees survive might move as temperatures rise or droughts become more intense. “There are a lot of unknowns,” he says.