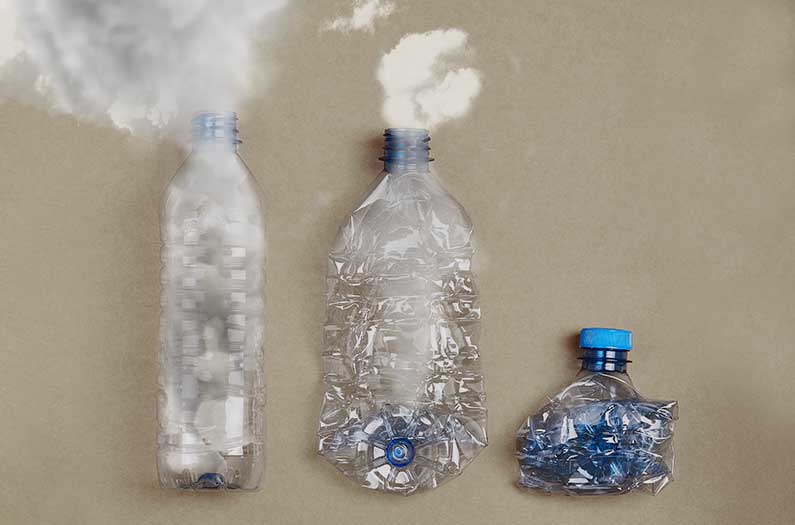 In a simulation where recycling, bioplastics, and carbon dioxide-utilization were used together in an optimal way, emissions dropped slightly below zero, while saving energy and costs.
By Prachi Patel
October 14, 2021

The world was already drowning in plastic when the Covid-19 pandemic hit. The use of protective equipment and surge in takeout and home delivery more than doubled the world’s plastic waste in 2020 over the previous year. And plastic pollution is also a climate problem. Most plastics are made from fossil fuels, using fossil fuels to power their manufacture, and are burned at the end of their life.

But new research shows that it might be possible to make plastics with net-zero greenhouse gas emissions for potentially lower cost than the status quo.

Doing this won’t come easy, of course. It will require boosting recycling rates to 70 percent—less than 10 percent of plastics are recycled today—along with using biomass and captured carbon dioxide to make plastics.

Making plastics today consumes about 6 percent of the world’s oil. This share is expected to go up to 20 percent by 2050. So reducing the greenhouse gas emissions related to plastics will be key for meeting the Paris climate goals.

Recycling and the use of biomass and carbon dioxide to make plastics have all been shown to make a dent in emissions. But these circular technologies are thought to be expensive and energy-intensive. And, say researchers from RWTH Aachen University in Germany, “no study identifies how circular technologies can be combined to achieve net-zero emission plastics.”

They are the first to do that. In their study published in Science, they prove that when used together in just the right way, the three technologies use 34 to 53 percent less energy and cost much less than conventional plastic production.

The researchers used more than 400 datasets covering the lifecycles of over 90 percent of the world’s plastics to create a computational model of global plastic production and waste treatment. They estimated emissions reductions in scenarios where the circular technologies are used separately versus all together.

The model showed that using only recycling reduces greenhouse gas emissions by 64 percent compared with today’s fossil-based plastics lifecycle. Meanwhile, relying only on plastics made from biomass—where biomass soaks up carbon dioxide emitted during production and waste incineration—cuts emissions by 95 percent.

In a third scenario, the world’s plastics are made with carbon dioxide captured from waste incineration. This capture and conversion to plastic requires electricity, and if it were all wind-powered, the method would cut plastic emissions by 94 percent, the team found.

None of the technologies alone got plastic to net-zero emissions. But when recycling, bioplastics, and carbon dioxide-utilization were all used together in an optimal way, emissions go down to slightly below zero while saving energy.

In this scenario, biomass is converted to methanol using heat, steam, and oxygen. Carbon dioxide produced during that step is also used to make methanol. The methanol is used to make the main raw materials used in plastics.

Recycling as much plastic as possible is key, the researchers say, because it reduces the overall demand for biomass and renewable electricity, and the corresponding greenhouse gas emissions.

If this combined scenario could be implemented, by 2050 the cost of global plastic production can be slashed by as much as $288 billion per year. But getting there would require a low-cost supply of biomass, carbon dioxide, and renewable electricity; for oil to be more expensive; and more incentives for investment in recycling.