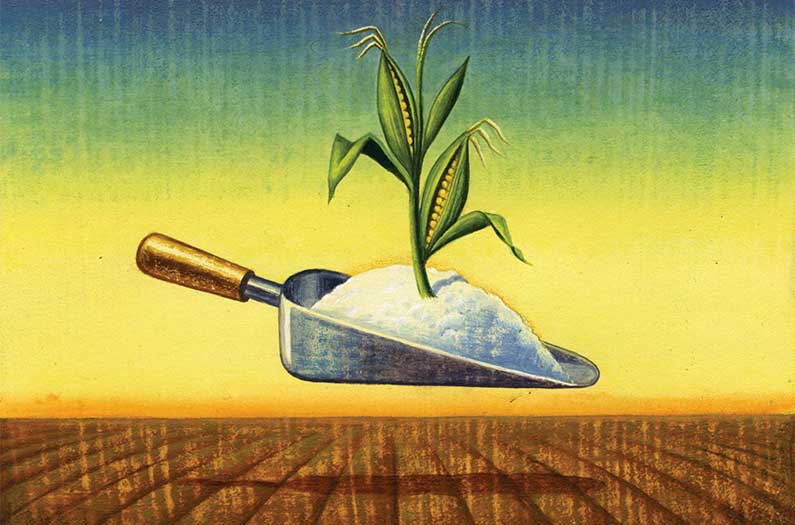 Here’s one way to save farmland: synthesize starch from CO2

Researchers develop a method to make this crucial industrial ingredient 8.5 times faster than nature can — with potential consequences for food security and land savings
By Emma Bryce
October 1, 2021

Researchers have found a way to produce the ubiquitous product, starch, using carbon dioxide. Their discovery not only finds a use for this harmful gas, but could also save the huge amounts of land, water, and fertilizer that’s typically used to grow corn for this ingredient.

Starch, a type of carbohydrate, is essential to the industrial production of hundreds of products: it’s used to thicken foods, to produce bread, to stiffen fabrics, and even to make paper. But producing this additive also uses up large amounts of land and water in the United States and elsewhere — which is concerning partly also because industrially farming corn for these products diverts land away from crops that could be grown to more directly provide food.

Now, instead of relying on this hugely resource-intensive process, researchers say they’ve found a way to artificially produce starch. And, they can do it in a series of steps that they calculate is 8.5 times more efficient than the process of photosynthesis, which a corn plant uses to convert CO2 and sunlight into carbs.

They accomplished this with a process that study author and microbiologist Ma Yanhe describes as “quite like the game of Lego”: a process of breaking down CO2, and building it back up into something new. This essentially mimicked the photosynthetic production of starch, just with some added ingredients and fewer steps.

First, the researchers used a catalyst to combine CO2 with hydrogen to create methanol, which was then exposed to enzymes that turned it into units of sugar, until they had a series of sugar molecules made out of six carbons (C6). These were then used to build up two key structures that make up starch: amylose and amylopectin. “Both amylose and amylopectin could be synthesized by connecting thousands of C6 compounds to each other,” explains Ma Yanhe, from the Tianjin Institute of Industrial Biotechnology in China.

Together, these formed long-chain starch molecules which the researchers say are equivalent to ‘natural’ starch that’s produced in corn. But the whole process involved just 11 steps and with some fine-tuning took only four hours to complete—compared to the 120 days that the average corn plant requires to generate starch.

That’s not to mention the potential resource-savings of this new method: “This discovery may make it possible to produce starch in an industrial way by consuming much less land and fresh water,” says Ma Yanhe, “as well as [less] fertilizer and pesticide.”

But before this starch-generating technology can be rolled out commercially, “there are still many challenges,” Ma Yanhe says. Enzymes are crucial to the process, but their use needs to be made more efficient—specifically by increasing their activity and stability—to cut back on costs, Ma Yanhe explains. Meanwhile, the CO2 conversion process is also a very energy-intensive process, involving high temperatures, which the researchers say they plan to tackle by using solar energy, going forward.

But if they can innovate over these hurdles in the future, it could bring the process of starch production from a resource-intensive field into contained bioreactors, where it can be swiftly and efficiently made. That could make swathes of land and water available for better use. In turn, that might aid food security, and potentially reduce the global warming impact and ecosystem harms of industrial farming.