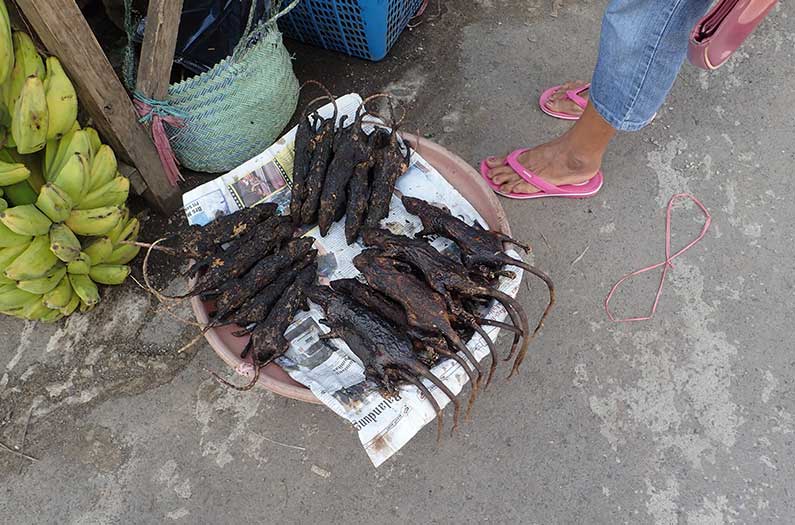 A survey of thousands in Asian countries found people with a high awareness of Covid-19 were more likely to cut back on consuming wild meat. A conservation group wants to harness this to put a dent in the wildlife trade.
By Warren Cornwall
October 6, 2021

The global pandemic that has killed more than 4.5 million people might have an upside for wildlife. It could persuade some people to stop buying wild meat.

The origin of the virus behind Covid-19 is still unknown, but a leading scenario is that a microbe jumped from a wild animal to humans.

Now, conservationists see signs that they could capitalize on fears of such animal-borne diseases as a way to put a dent in the wild meat trade, which threatens animal populations and attracts international criminal networks. In a March 2020 survey of 5,000 people in five Asian countries shortly after the pandemic took hold, respondents with a higher awareness of the disease were up to 24% less likely to buy wild animal products.

“It’s been an opportunity, as sad as it has been,” says Robin Naidoo, a conservation scientist for the World Wildlife Fund (WWF), who led the research. “An opportunity to highlight these links between unsustainable exploitation of biodiversity and the emergence of things like Covid, which have literally impacted everyone.”

The trade in wild meat is multifaceted, ranging from subsistence hunters to people who devour rare or exotic species as a status symbol or for promised health benefits. It has also proven a vexing problem for conservationists, with spotty enforcement, illegal black markets and a continued demand for wild meat and products such as ivory.

When early cases of Covid-19 were traced to an open-air meat market in Wuhan, China, some speculated the disease might have originated from a butchered wild animal such as a bat or pangolin. Those concerns prompted calls for a ban on wild meat trafficking. China outlawed the sale and consumption of all wild land animals in February 2020. The WWF urged other countries to follow China’s lead.

But Naidoo suspects that outright prohibitions will suffer some of the same shortcomings as crackdowns on other popular products such as alcohol or drugs. “A blanket ban on wildlife consumption is not likely to be effective,” he says.

Some scientists have also warned that a sweeping ban could hurt both people and wildlife, if it deprives people of access to a critical source of protein or forces them to expand farms that destroy habitat.

Naidoo and several other researchers decided to find out if fears around Covid-19 might help persuade people to voluntarily drop wild meat from their diet.

In early March 2020, as Covid-19 was spreading across the globe, his team surveyed 1,000 people in each of five Asian countries and territories – Hong Kong, Japan, Myanmar, Thailand and Vietnam. They asked people about their wild meat consumption habits, opinions about wild meat market closures and their attitudes about Covid-19. They also gathered data about income, education, age and other personal details.

In all five countries, awareness of the disease ranked as the top factor for predicting whether people said they were likely to eat wild meat in the future or likely to change wild meat consumption in response to the disease, according to results reported in the October issue of Nature Ecology & Evolution. People who reported a high degree of awareness about the disease were overall 11% to 24% less likely to buy wildlife products.

“One surprising thing was just how strong an association (there was) between awareness with Covid-19 and reduced intention to buy,” says Naidoo. “I wasn’t personally expecting that.”

His organization, in concert with other advocacy groups and regional governments in parts of Asia – a hub for the international wild animal trade – are using the results to help develop potential advertising campaigns highlighting links between Covid-19 and wild meat.

While the data in this study comes from the early days of the pandemic, a follow-up survey by the same groups show pandemic fears continue to dampen people’s appetite for wild animals. In May, WWF released results from a survey done a year after the initial survey, this time involving 7,000 people in the U.S., China, Thailand, Myanmar and Vietnam.

Overall, 29% of people said they had stopped or cut down on eating wildlife since the pandemic started. The survey in China mirrored that overall result, while the number of people in Thailand saying they cut back on wildlife consumption doubled from the previous year. Still, 9% of people reported they were likely to continue buying wildlife for consumption.

Now, as the spread of Covid-19 vaccines heralds a potential easing of the pandemic, Naidoo wonders whether demand for wildlife will bounce back. “It’s often the case where there’s a crisis and we respond really strongly to it and then a few years later it’s back to business as usual,” he says. “We hope that this is an event of such grave importance that it does inspire a reset.”