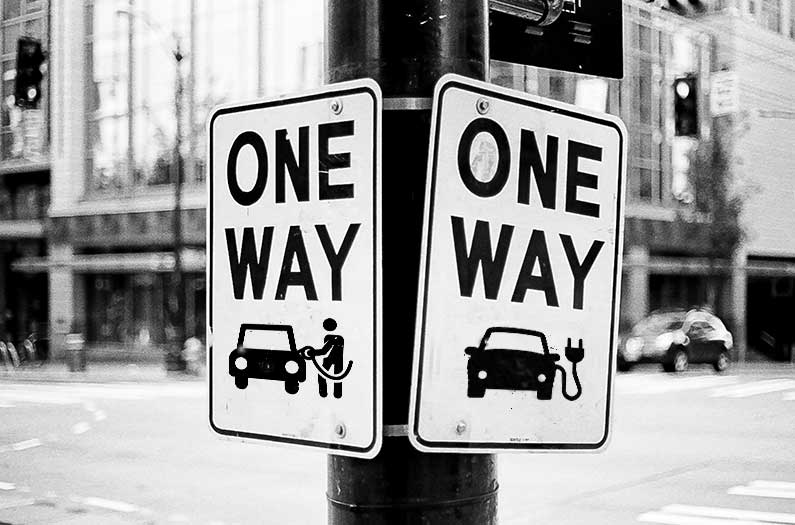 How understanding century-old automotive history could pave the way for wider adoption of electric cars today
By Sarah DeWeerdt
October 19, 2021

At the dawn of the automotive age in the early 1900s, three different technologies—gasoline, electric, and steam—vied for dominance of the U.S. automotive market. It’s commonly assumed that gasoline cars ultimately won out because they were cheaper, better, and could travel farther than their electric counterparts. But a new analysis suggests the real reason was something different: a lack of infrastructure to support electric cars.

In turn, that history has relevance for the transition from gasoline to electric vehicles underway today and its potential to reduce greenhouse gas emissions associated with the transportation system.

“Just because many now think that electric vehicles are better (from a climate perspective) doesn’t mean that EVs will automatically win the race,” says study team member Josef Taalbi, an economic historian at Lund University in Sweden. “Ensuring a technology shift away from fossil fuels requires a political willingness to provide large-scale infrastructure.”

Taalbi and his coauthor, Lund University postdoctoral researcher Hana Nielsen, analyzed a database of more than 36,000 passenger car models produced in the United States between 1895 and 1942. They cross-referenced the specs of each model with information about local market characteristics and automobile infrastructure, including roads, gasoline availability, and electricity generation.

This enabled the researchers to build a mathematical model of how car makers decided what type of cars to produce. And that careful look at the characteristics of cars produced in the early 1900s calls into question the conventional wisdom about why gasoline cars came to dominate, the researchers report in Nature Energy.

Electric cars were more expensive on average, but that was mostly because they tended to be higher-end models aimed at an affluent segment of the market. When the researchers controlled for performance and other features, the price of electric vehicles was about on par with gasoline cars. What’s more, gasoline and electric cars had similar operating ranges, which expanded at roughly the same rates between the mid-1890s and mid-1910s.

Instead, the analysis suggests that manufacturers of electric cars tended to be located in counties where electricity arrived early and generation capacity was expanding fast.

Road infrastructure also made a difference: because of their heavy batteries, electric cars didn’t drive so well on the poor-quality roads often found in rural areas. So electric car models did the best in urban areas with dense networks of paved roads.

But it was probably the slow development of electric infrastructure that ensured the dominance of gasoline cars a century ago, the researchers found. They modeled what would have happened if electricity grids had expanded 15 or 20 years faster—that is, if either 1917 or 1922 levels of electrification were achieved in 1902. This faster process of electrification would likely have resulted in electric cars becoming the dominant mode of transport, especially in urban areas.

Government has a role in ensuring wide rollout of charging points for electric vehicles to help overcome such barriers, according to Nielsen. “We need to create this state-of-mind that electric vehicles will be the default mode of transportation in the future and act accordingly with consistent policies and messages,” she says. “The worst that could be done are stop and go policies which leave the consumer and producer in a limbo, not wanting to waste any of the resources on a technology which might not make it.”