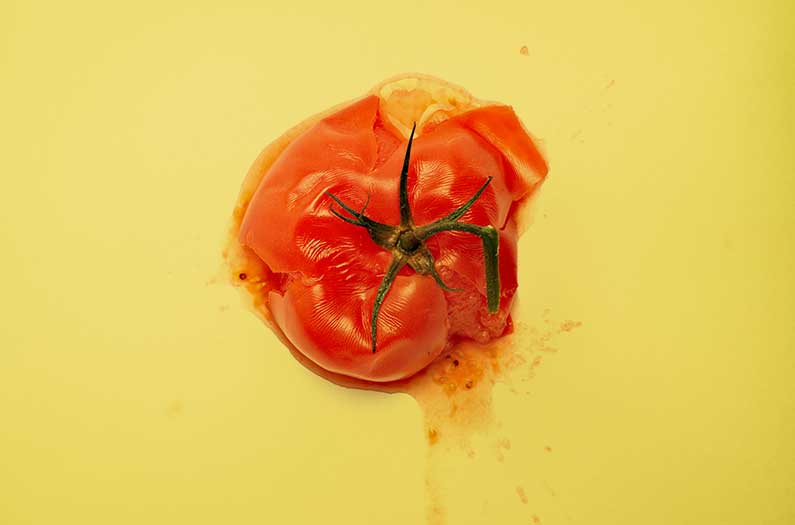 Their new discovery not only keeps damage-prone fruit out of the landfills, it also requires less energy-guzzling infrastructure for storage and cooling
By Emma Bryce
October 22, 2021

The average grocery store tomato often presents a trade off: you may get a nice firm tomato that is however watery and flavorless from its time in cold storage. On the other hand, you might spy the juiciest-looking red tomato on the shelf—only to discover when you pick it up that its soft flesh is festooned with unappetizing bruises.

Now researchers may have found a solution that tackles both these problems: they’ve discovered a gene that allows tomatoes to ripen, but keeps their flesh firm for longer to protect against spoilage. This could be a boon not just for picky consumers, but for tackling food waste—especially if their discovery is applied to other fruits that share the tomato’s fate.

Tomatoes are some of the most widely-consumed fruits globally, and “the most valuable fruit crop worldwide in terms of total production value,” explains James Giovannoni, a plant molecular biologist at the Boyce Thompson Institute, an independent research institute devoted to using plant sciences, and lead author on the new study. So it made sense as a subject for his research. Giovannoni and his colleagues had previously studied ripening in tomatoes, a process that typically goes hand-in-hand with softening of the flesh. But this time they wanted to find out if there were any genes associated with ripening and softening whose activity they could control.

They began their research by looking for transcription factors—proteins that control gene activity—that might correspond with genes in two parts of the tomato. These were the locule, the gel-like cushion around tomato seeds where the first signs of ripening occur; and the pericarp, the fruit’s outer wall, where tangible softening occurs. Their search revealed one transcription factor called SILOB1, which was highly-expressed in both these zones of the fruit, suggesting that it would play a key role in the softening processes.

When they tested SILOB1 in several lines of tomato plant, that’s exactly what they found: over-expressing SILOB1 caused the fruits to go softer more quickly. Meanwhile, inhibiting its expression resulted in fruits whose flesh stayed firmer for longer.

But crucially, this delayed softening was achieved without delaying the ripening process in tomatoes, which occurred as usual. That’s important, because ripening is what generates the flavor in a mature tomato. It’s also why store-bought tomatoes are often so flavorless, because they’ve been picked before they’ve ripened, and then had their ripening process delayed through temperature controls. This is all designed to keep them firm until they reach the shop. (Cue: crunchy tomatoes in your salad.)

By separating out the firming from the ripening process using SILOB1, the researchers were able to create tomatoes that could stay more resilient to bruising for longer, extending their shelf life, while still retaining the traits of tasty tomatoes. Indeed, the acid and sugar levels in the transgenic bred fruits showed the same profiles as in ordinary, ripened fruit, suggesting their flavors would be the same. What’s more, the transgenic tomatoes may also have higher nutritional values, the researchers suggest, because they contain more of the pigments beta-carotene and lycopene, which are both antioxidants, while our bodies also convert beta-carotene into vitamin A.

Most importantly though, the transgenic tomatoes could make for much more sustainable fruits. Usually, the processes involved in keeping tomatoes unripened and firm for longer requires large amounts of storage space and energy for cooling, Giovannoni explains. The firmer transgenic tomatoes, meanwhile, won’t need as much energy-guzzling infrastructure.  “This represents a genetic solution to softening: firmness that does not require the expensive inputs above,” Giovannoni says.

Once at their destination, the firmer fruits would also suffer less loss through bruising and spoilage, reducing the amount of post-consumer food waste that plagues our food systems. “That is both a sustainability and food security benefit,” Giovannoni says.

As for whether the discovery of SILOB1’s firming qualities could be applied to other fruits, he says he believes so. SILOB1 is a member of the gene family that’s found in other soft fruits like blueberries, strawberries, and raspberries (botanically, tomatoes are counted as berries) so there’s a strong possibility that these discoveries could be applied elsewhere, he says. “It is very likely similar genes with similar functions exist in these and other fruits.”

A potential win-win for the planet and our palates.