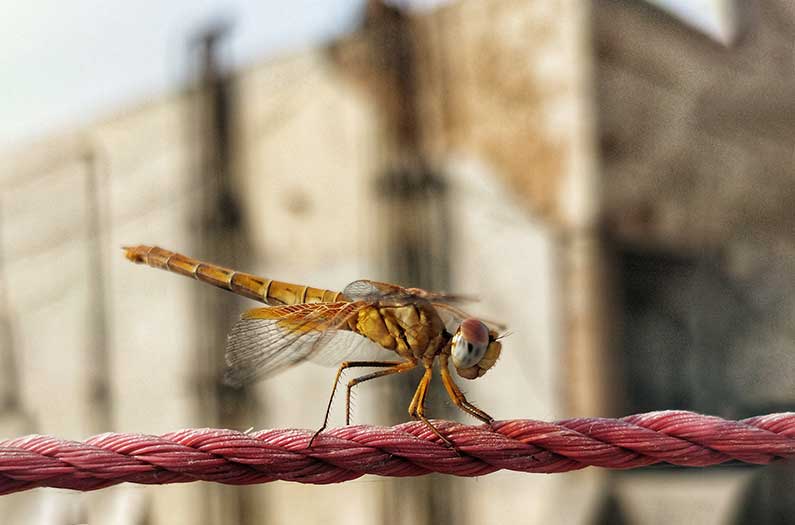 New work suggests that the countryside can support a lot of insects, but a small variety. Meanwhile, cities have less vegetation, but a bigger variety of habitats.
By Warren Cornwall
October 20, 2021

The decline of insects in various parts of the world have sparked warnings of an ecological “Armageddon” as a pillar of food webs crumbles.

Now, researchers in Germany say they have found evidence that leafy refuges might help soften the blows that both farming and urban sprawl deliver to bugs.

In recent years, scientists have reported alarming declines of insect populations. It is a crash of both sheer volume and the number of species. In Germany, scientists four years ago reported the amount of insects in wildlife preserves fell by more than 70% over a 27-year time span. Two years later, scientists warned that nearly half of the world’s insect species could disappear in the “next few decades.”

The news isn’t all bad. Some types of insects in some parts of the world are faring better. For instance, aquatic insect numbers appear to be on the increase. But even scientists who saw this uptick found that land-based insects are in decline.

What’s less clear is the causes of this disappearance. More intensive agriculture and the pesticides that come with it are one suspect. The paving of insect habitat as cities grow is another. Then there’s the omnipresent threat of climate change.

To try to tease out the forces at play, scientists turned to the streets, forests and fields of Bavaria in southern Germany.

In 2019, German researchers set out 179 tent-like insect traps around the region. They were placed in locations meant to capture a range of habitat conditions, including forests, meadows, heavily farmed areas and cities. The tents were also set in different temperature zones, from warm lowlands to cool mountainsides.

Every few weeks through the spring and summer the scientists scooped up their catch from each trap and weighed it. Then they blended each pile of dead insects into a paste and ran tests to detect which insects’ DNA showed up – a far easier way to track individual species than painstakingly identifying each bug by hand.

The results showed that while habitat loss has a major effect across the board, the kind of damage isn’t the same. In farmed areas, the collective mass of insects showed little change from more natural woods and meadows. But while the total weight of insects held steady, the variety of species fell by nearly 30% when moving from natural areas to farm fields. The number of endangered species plummeted still further – by more than half, the scientists reported on Oct. 12 in the journal Nature Communications.

Meanwhile, cities showed a different pattern: Little change in species diversity, but a steep 40% drop in the total insect biomass.

The study can’t answer exactly what forces drove these different fates. One possibility is that while farming produces a lot of vegetation where insects might live, the plants growing there are homogeneous. So the countryside can support a lot of insects, but a small variety. Meanwhile, cities have less vegetation, but a bigger variety of habitats such as parks, gardens and strips of grass along sidewalks.

These differences from town to country “are an important warning sign for researchers” to be cautious when monitoring for insect declines, said Johannes Uhler, an ecologist and PhD student at the University of Würzburg who was the lead author of the study. For instance, just measuring biomass could obscure declines in diversity, and vice versa.

The new work also suggests that land use, rather than rising temperatures, is behind insect woes, at least in southern Germany. Higher temperatures there appeared to be a boon for bugs. Both total insect numbers and diversity increased at hotter traps. “That surprised me a little bit,” said Uhler.

It’s possible that the relatively mild Bavarian climate meant that temperatures didn’t soar beyond the limits bugs could tolerate, said Uhler. Instead, the heat acted like a shot of espresso, spurring insect activity and reproduction. Insects in hotter climates closer to the equator and specific species confined to small, temperature-sensitive habitats might be more vulnerable to current high temperatures, he said.

The new findings illustrate the different ways that habitat loss can take a bite out of bugs. But it also points to some common solutions. Patches of forest in both cities and farmed areas stood out as hotspots of insect numbers and diversity. While adding green spaces to benefit wildlife isn’t a novel concept, the results provide strong evidence that they are a tool for improving the fate of insect populations wherever they live. “These measures really could help,” said Uhler.