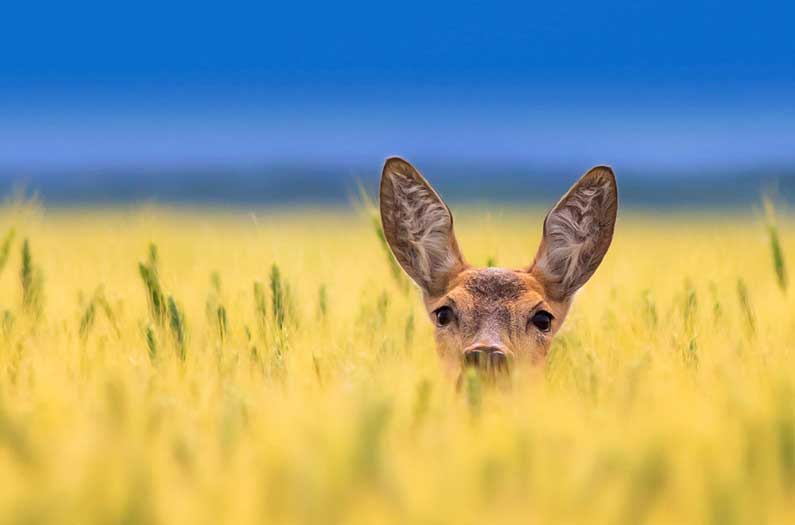 A decade of research holds the answer to this longstanding farming conundrum.
By Emma Bryce
October 15, 2021

Farming less land more intensively is a better solution for biodiversity than trying to integrate farmland with nature.

This is the key finding from a recent study that homes in on a longstanding debate over whether it’s better for biodiversity to share farmland with nature, or to rather farm in a way that spares more wild land from disruption. As we grapple with the competing forces of food production to feed a growing world population, and the need to protect nature and ecosystem services, this question grows increasingly relevant.

The new paper came to its surprising conclusion by reviewing dozens of research papers on the biodiversity impact of different types of land use, which collectively covered more than a decade of research. The examined studies incorporated over 2,500 species of plants, insects, and birds, and covered diverse ecosystems on five continents, in countries ranging from Ghana and Mexico, to India and Kazakhstan.

Yet across these hugely varied environments, a clear trend emerged across the decade of research: while most studies found that species inevitably lose out to some degree through the impacts of our food systems, overall biodiversity still fares significantly better in contexts where land is intensively farmed in constrained patches, with the aim of keeping more wild land intact.

That’s pitched against the alternative, where farmland may incorporate wild features, like trees or hedgerows, in an attempt to boost biodiversity—but where it nevertheless replaces a larger share of truly wild land, because this mixed-use farmland takes up more space to produce the same amount of food.

The review abounded with examples that revealed land-sparing as the better option for biodiversity, over and over again. For example, data from studies in India and Ghana showed that declines of birds, butterflies, and trees would be less severe under a land-sparing approach, than under a farming regime where more land was shared. Meanwhile, a raft of studies in Colombia that covered 318 types of bird and 28 dung beetle species suggested that these species would be more populous if more wild land was left intact, but would decline if farmland was shared instead of simply maintaining wild habitat (unless the shared farmland occurred directly adjacent to untouched forest.)

There were benefits beyond biodiversity, too. Some of the studies showed that where more wild land was kept intact, more carbon would be stored than in environments where land-sharing was the dominant trend—a finding that’s also backed up in other research.

The review’s central conclusion about biodiversity hinges on a critical causal relationship between species and ecosystems. Because species are hugely specialized to particular habitats and environmental conditions, in most scenarios even modest disturbances can cause species declines. This means that biodiversity depends on untouched land to truly thrive. “This is why so many species decline even with gentler farming,” says study author Andrew Balmford.

So, while intensive farming gets a bad rap, the better choice for biodiversity may indeed be to ramp up the amount we produce, just on more restricted areas of land, the study suggests.

However, that doesn’t give us a free pass to industrialize agriculture, with all the wanton destruction that entails, the author warns. Realistically, though, can the study’s vision of intensive farming on smaller areas of land avoid other environmental damages—soil depletion, chemical pollution— that might in fact cancel out some of the benefits of saving biodiversity?

The study’s author does believe that if we go about it in the right way, we can farm intensively in a more sustainable way than we have in the past. Pairing new, greener farming methods like integrated pest management and drip-irrigation, with a raft of new, evolving technologies—such as breeding plants with genetic traits that give them higher yields or make them more resilient to climate change—could enable much more efficient and productive agriculture in the relative near-term. This means that more intensive farming needn’t come at a sickening cost to the environment, the study suggests.

But really the biggest challenge will be to ensure that, going forward, new efforts to intensify farming are explicitly guided by the priority to protect wild habitat: it’s crucial that biodiversity benefits don’t get forgotten in a drive to simply produce more food and profit from intensive farming.

There are of course still many unknowns, risks, and hurdles to navigate in the study’s land-sparing approach, which all need to be interrogated further. For now, the research turns a few assumptions on their heads and simply suggests that if we want to minimize biodiversity loss, farming intensively to spare as much wild habitat as possible, could actually be the most powerful place to start.

Balmford et. al. “Concentrating vs. spreading our footprint: how to meet humanity’s needs at least cost to nature.” Journal of Zoology. 2021.