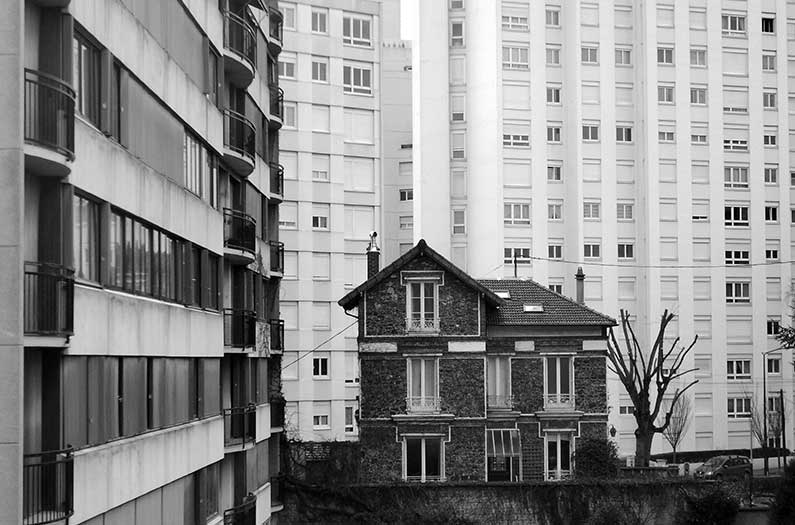 Aim low when designing the climate-friendly city of the future

In a life cycle assessment of greenhouse gas emissions, high-density, high-rise cityscapes were the worst-case scenario
By Sarah DeWeerdt
November 9, 2021

The world will have 2.5 billion more people living in cities by 2050, the United Nations predicts. Conventional wisdom holds that the most climate-friendly way to house those new urban dwellers is in tall, close-together buildings. But that’s actually the worst urban design from a greenhouse gas perspective, a new study suggests.

To minimize the carbon emissions associated with city buildings, planners should aim for an urban fabric of dense, low-rise buildings along the lines of Paris, not densely packed skyscrapers like Manhattan.

The results highlight the need to analyze carbon emissions across the life cycle of a building, as well as how a building fits into the larger cityscape—factors that aren’t well covered by existing green building assessment schemes.

“We need to switch from focusing on a single building at the time to understanding that individual buildings are part of a neighborhood or a city,” says study team member Francesco Pomponi, chair of sustainability science at Edinburgh Napier University in the UK. He recommends that urban planners “scale up the analysis to truly understanding implications of choices made at the building level.”

Pomponi and his collaborators gathered data on real-world neighborhoods surrounding 25 addresses in 7 different UK cities, as well as a smaller number of buildings elsewhere in Europe. They used these to build a computer model that generates simulated urban neighborhoods, automatically producing blocks and streets and populating them with buildings. The researchers then calculated the carbon emissions associated with building and running those imaginary buildings.

The researchers ran the model 5,000 times to test the effects of different building densities and heights. To house a given number of people (20, 30, 40, or 50 thousand), a high-density, low-rise cityscape like Paris is associated with the lowest greenhouse gas emissions from buildings over the entire course of their life cycle, the researchers report in the journal Urban Sustainability.

Meanwhile, far from being the avatar of a climate-friendly city, a high-density, high-rise cityscape like Manhattan is the worst-case scenario from a greenhouse gas perspective.

Tall buildings are associated with greater greenhouse gas emissions because the materials used to build them, especially concrete and steel, are carbon-intensive. And skyscrapers can’t be built as close together as low-rise buildings can, so they don’t save as much land area as people might assume.

For a given population size, Manhattan-like development is associated with an average of 142% greater building greenhouse gas emissions than Paris-like development, the researchers calculated. The low-rise, Paris-like urban fabric saves an average of 365 tonnes of carbon dioxide per person housed over the course of a building’s life cycle—the equivalent of driving more than 900,000 miles in a car.

The lowest emissions were associated with low-density, low-rise development: basically urban sprawl. But that’s precisely because this urban form involves such sparse buildings. Compared to sprawl, Paris-like development can provide housing for more than twice as many people for only about 25% more carbon emissions: clearly the best balance of carbon and space efficiency, the researchers argue.

What’s more, the benefits of Paris-style development may go beyond environmental sustainability. “While we didn’t cover this in our study, there’s research suggesting that high-rise constructions do not foster a sense of social cohesion and community building,” Pomponi says.