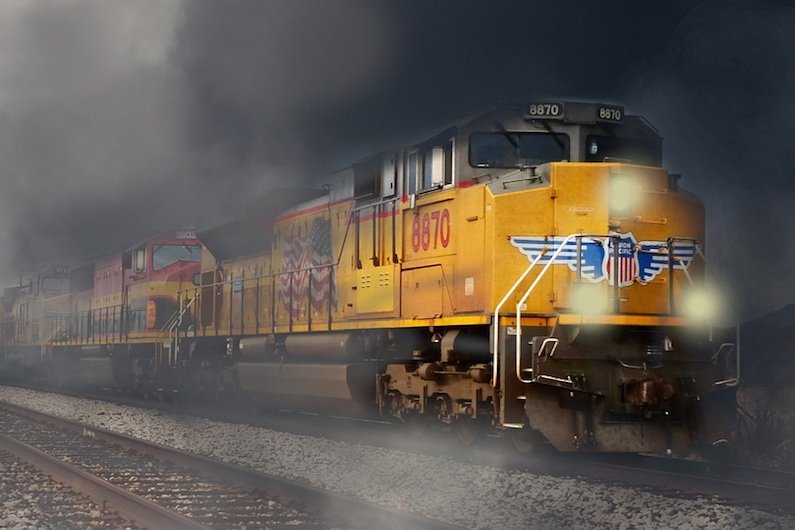 A large freight train retrofitted with a boxcar carrying a 14 MWh battery could travel 240 km on a single charge—saving billions in climate and health damages
By Prachi Patel
November 18, 2021

Between trains, planes and automobiles, that last means of transport is well on its way to lowering its carbon footprint by running on batteries. But electrifying airplanes and trains will be much more challenging.

Or will it? For freight trains at least, electrification is within reach and could make economic sense, according to a new analysis published in Nature Energy. Improvements in battery technology plus the easy access to cheap renewable electricity make battery-electric rail possible, say the paper’s authors.

This switch to electric freight trains could bring added benefits. Taking into account the health damages from air pollution and climate damages of carbon dioxide emissions, battery-powered locomotives would save the US freight rail sector US$94 billion over 20 years, researchers from the Lawrence Berkeley National Laboratory say.

U.S. freight trains transport more goods than any other rail system in the world. Every year, they produce about 35 million metric tons of carbon dioxide. And even though they are more fuel-efficient than trucks, they aren’t required to have stringent pollution control measures, resulting in an estimated 1,000 premature deaths in the U.S. per year.

The US freight rail sector’s capacity is expected to double by 2050, and if it continues to run on diesel, it will by that year consume half the diesel used by freight trains globally.

One way to electrify trains is to install overhead electric lines to the current rail infrastructure. But that’s difficult in vast countries like the US and Canada.

The good news is that today’s US locomotives could conveniently be retrofitted to run on batteries. That’s because they use diesel-electric drivetrains: a diesel engine drives a generator to produce electricity, which then powers an electric motor that turns the wheels. Converting these trains to fully electric would require a large battery and wiring to deliver the electricity to the drivetrain.

Amol Phadke and his colleagues propose each train have a boxcar carrying a 14 megawatt-hour battery. Their analysis shows that a single boxcar should pull a typical large freight train—with four locomotives, 100 freight cars, and about 6,800 metric tons of payload—over a distance of around 240 kilometers on a single charge. That’s the average distance typical trains travel before stopping for a crew change. Batteries could be recharged during those stops. On high-traffic routes, discharged boxcars could be swapped with charged ones.

The researchers also calculated the economics of owning, maintaining, and operating battery-powered versus diesel-electric freight trains. Over 20 years, battery-electric tender cars cost US$6.47–8 million and diesel locomotives cost US$5.85–11.83 million, they found, depending on whether environmental damages were included. And at battery prices of $100 per kilowatt-hour expected in the near future, battery-electric trains would be cost-comparative with diesel-electric trains when including environmental costs, or if rail companies can get wholesale electricity prices and use 40 percent of their charging infrastructure.

Finally, the researchers show that switching to batteries alone would cost $15 billion. When pollution damages are accounted for, though, the battery-electric scenario leads $44 billion savings, and when considering climate damages as well, those savings more than double to $94 billion.