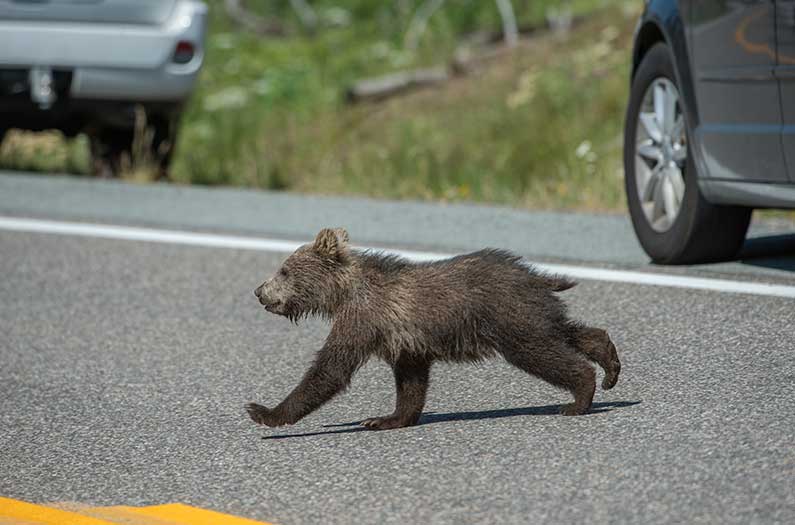 Blood on the pavement

As traffic and roads spread across the world, scientists hope a new global study of roadkill could help alert people to where species are most threatened by collisions.
By Warren Cornwall
November 10, 2021

For the leopards of north India, the road to extinction is paved.

Deadly encounters with cars pose a serious threat to the continued survival of the regal cat in that region, as well as dozens of other animals across the globe, according to a new study of how the world’s fast-growing web of roads affects thousands of species.

The research sheds light on the magnitude of the roadside carnage and how an individual species’ biology can intersect with traffic deaths to endanger its future survival. Scientists hope it could also help alert road builders and government agencies to potential problem spots amid a construction spree that could add millions more kilometers of pavement by 2050.

In some cases, including the leopard in India, animals “are at risk of local extinction in the near future if observed levels of roadkill persist,” said Manuela González-Suárez, an ecologist at the University of Reading in the United Kingdom, who took part in the research.

The lethality of cars is readily apparent to anyone who has dodged dead squirrels, opossums, cats and other critters that litter roadsides—commonly known as roadkill. Less obvious is the scale of the damage to the world’s wildlife and the threat such deaths pose to entire species. For example, wild guinea pigs that reproduce quickly might make for a lot of roadkill. But that could pose less risk than for bears that have fewer individuals and offspring. Scientists from six continents set out to produce a more detailed global picture of the dangers roadkill pose to biodiversity.

Rather than sift through rotting carcasses, this team left the dirty work to others. They compiled previous studies measuring local or regional roadkill between 1995 and 2015 – more than 1,300 reports covering 392 different kinds of mammals. The results showed that among large animals, moose were at most risk of being killed—as many as 1.17 per kilometer per year. For smaller animals, guinea pigs earned the unfortunate honor at more than a dozen per kilometer per year in some places.

But understanding the danger to an overall species, and to the thousands of mammals not directly counted, required more sophisticated computer work. To estimate how roadkill levels would influence the fate of a local population, the researchers factored in the overall density of a particular species in a region and key biological traits that can affect population growth, such as the lifespan and number of offspring. To expand the analysis to more than 4,600 different mammal species, they identified which traits most affected the roadkill risk for different types of animals, and then calculated the risks posed to animals that shared those traits, even if they weren’t directly counted in roadkill studies.

The results showed that roadkill posed a problem for populations of 83 species considered at risk by the International Union for Conservation of Nature, according to the study published in September in Global Ecology and Biogeography.

Deaths from traffic collisions are severe enough that they could endanger the survival of four different regional populations of animals over the next 50 years, the scientists warned. That includes the leopard in north India, the brown hyena in southern Africa, and the maned wolf and little spotted cat in South America. Other vulnerable animals highlighted by the research include Spain’s Iberian lynx, black and brown bears, jaguars and lion tailed macaques.

The findings show the importance of considering the potential effect of roadkill when governments plan to build new roads, said Clara Grilo, a conservation biology researcher at the University of Lisbon in Portugal, and the study’s lead author. In some places, agencies have begun adapting roadways to make them more wildlife friendly, for example by building bridges or tunnels that animals can use to avoid traffic. The new approach to calculating the danger posed by roadkills can be used to find “where roadkill monitoring programs are most needed to evaluate risk and trigger the most appropriate measures to avoid local extinctions,” said Grilo.

The need for such measures could only increase as road construction surges. When the scientists mapped the locations of species most at risk from roadkill, sub-Saharan Africa and south Asia stand out as global hotspots where biodiversity and traffic already collide. Those same regions are also where a road boom is forecasted in the coming years as economies grow. “Emerging market countries will need to develop their connecting infrastructure,” acknowledged González-Suárez. But “it is essential that ecologists and conservation scientists are consulted.”