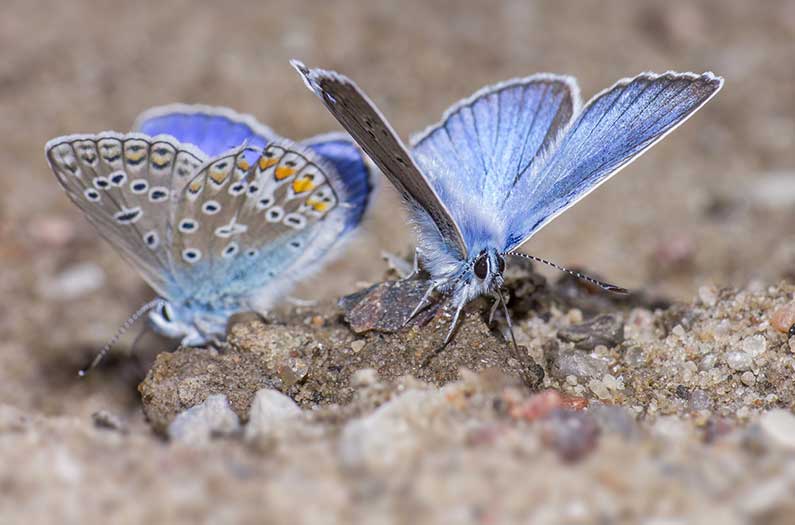 As grasslands vanish in parts of Europe, butterflies are finding refuge in unusual places, including industrial wastelands.
By Warren Cornwall
November 24, 2021

When ecologist Thorsten Münsch went looking for the tiny silver-studded blue butterfly recently, he found them flocking to a place that’s usually filled with enormous machinery, dust and explosions—limestone quarries.

In the Diemel Valley in central Germany, home to the region’s largest concentration of the meadows that once were the butterfly’s preferred habitat, these quarries have come to serve as an unlikely butterfly refuge, the PhD student at Osnabrück University discovered.

The phenomenon is part of a larger problem facing Europe’s butterflies, one that is prompting butterfly conservationists to press for seemingly unorthodox measures, including mining, intensive grazing and an increased human presence on the landscape.

The issue revolves around the decline of sparsely vegetated meadows with alkaline soil containing limestone or chalk, known as calcareous grasslands. These spaces have been disappearing in much of Europe for the past century. Once kept open by grazing sheep and other livestock, and by herds of wild animals before the arrival of human shepherds, the meadows have given way to either plowed fields or, where such farming isn’t viable, to shrubs and forests.

While the recent return of forests in parts of Europe has been welcomed as a natural revival, for insects that evolved to live in these disturbed grasslands, it’s bad news. That includes around half of the continent’s butterflies.

The dime-sized silver-studded blue is a perfect example. Sporting wings of glittering blue on one side and spotted silver on the other, these butterflies were once common throughout Europe. While still abundant in some parts of southern and eastern Europe where small-scale livestock grazing persists, their numbers have fallen dramatically in much of northern Europe as calcareous grasslands disappeared. In the United Kingdom, their numbers fell by 64% between 1976 and 2014.

The butterfly thrives in sparsely vegetated areas, where temperatures are higher thanks to the lack of shade and there is abundant birdsfoot trefoil, a small, flowering groundcover. The insect deposits a single egg near the plant, and the emerging caterpillar feeds on the leaves. The caterpillar is guarded by colonies of cornfield ants that dwell in such meadows. These ants fend off potential predators and shelter the pupa in the ant nest before it emerges as a butterfly. In return, the ants feed on a sticky substance excreted by the caterpillar.

Over 25 years, Fartmann, noticed that the silver-studded blue had become less prolific in the grasslands of the Diemel Valley and nearby Brilon Plateau. So the younger scientist set out to study the details of what was happening and what might be done about it.

Over two years, Münsch surveyed 150 sites in the region, concentrating on 51 active and abandoned grasslands and limestone quarries where the butterfly had once been sighted. He found that quarries consistently outranked grasslands. All of the 9 active quarries with a history of butterfly presence were occupied when Münsch visited, while 60% of the abandoned quarries – 12 in total—also had the insect. By comparison, 57% of the 14 still-used meadows contained butterflies, while they had vanished from the eight abandoned meadows. The butterfly populations were also nearly four times more dense in occupied quarries than in similar grasslands, the scientists reported in mid-November in the journal Insect Conservation and Diversity.

“Until our study there was no other study showing how important these quarries are as a refuge for the species,” said Fartmann.

When the scientists delved into the factors driving these differences, they found higher butterfly numbers in places with higher temperatures, more human activity, more bare ground and concentrations of birdsfoot trefoil.

While quarries might not seem like a hospitable place for delicate insects, much of the land there is left alone during mining as workers work in other parts of the quarry. The birdsfoot trefoil is one of the first plants to take root in the thin, recently-quarried soil, where there are no shrubs and trees to shade out the smaller plant.

But as time passes, bigger plants take over in abandoned quarries as they do in once-grazed meadows. Even in actively-used meadows, grazing is often no longer intense enough to create ideal conditions for the silver-studded blue. “The vegetation structure in the calcareous grasslands is nowadays much more dense and taller than a few decades ago,” said Münsch.

To preserve butterfly habitat in the region, the two German researchers recommend a range of actions that all boil down to this: working the land to hold bigger plants at bay. That includes continued mining in limestone quarries, not revegetating abandoned quarries, periodically burning these areas, and resurrecting grazing by animals such as sheep and goats.

They aren’t alone pushing for such measures. Czech researchers recently warned that plans to revegetate hills of ash left from burning coal threatened some of the few remaining populations of the grayling butterfly in that country.

However, for Martin Warren, a UK-based butterfly ecologist and head of development for Butterfly Conservation Europe, industrial sites are a poor substitute. He’s more interested in protecting and reviving grasslands through activities like more grazing.

“As conservationists what we should be doing is trying to get these native habitats better managed,” he said. “Then these quarries would not be as important.”