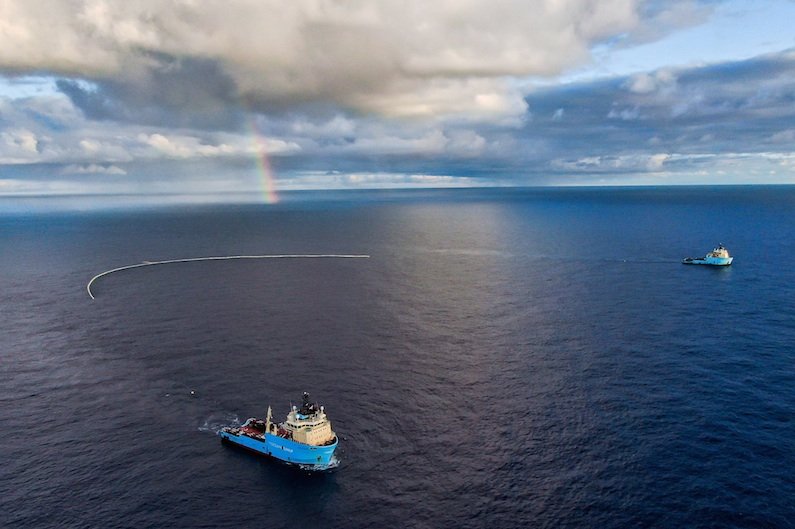 Massive amounts of plastic debris swirl around in the world’s oceans, floating around for years and harming marine animals and seabirds. Ships that go out to clean up the ocean would typically store the garbage on board and carry it thousands of kilometers back to port.

A new study presents a more efficient way to go about cleaning up the ocean: converting the plastic waste into fuel onboard the ship to create a self-powered cleanup operation. This would cut the number of round trips back to port and get rid of the need for fossil fuels needed by the ships, researchers write in the journal Proceedings of the National Academy of Sciences.

Between 4.8 to 12.7 million tons of plastic enter the oceans every year. Much of this accumulates in the gyres formed by ocean currents. Projects to remove this plastic trash are now underway. The most notable one is the non-profit The Ocean Cleanup, launched in 2013, which plans to use small ships to tow floating booms across open waters to clean up 90 percent of floating ocean plastic pollution.

Towing the booms and then bringing the trash back to land requires burning fossil fuels. In an optimistic scenario, removing all ocean plastic using this approach could take 50 years. That time could be shortened if return trips to unload plastic and refuel ships were eliminated.

In the new study, scientists from Harvard University, Worchester Polytechnic Institute and Woods Hole Oceanographic Institution evaluate the impact that self-powered plastic collecting could have on cleanup time and fuel usage.

They outline a viable technology for converting plastics into usable fuel: hydrothermal liquefaction (HTL). The process utilizes high temperatures of 300–500°C and high pressure to transform plastics into chemicals that can be used as fuels. Using a computer simulation tool, the researchers calculate that an HTL reactor that fits on a ship should be able to produce enough oil to power the ship but also the reactor itself.

Onboard waste-to-fuel conversion has another advantage, the researchers say. Plastic harvesting on cleanup ships is typically done manually today, with workers scooping the plastic out of the collecting booms and into small bags to minimize fuel use. But an onboard fuel converter would make automated plastic collection more practical.

The estimated cleanup time for the Great Pacific Garbage Patch using a self-powered vessel would depend on the number of booms that could be deployed and the distance between the booms. A thousand booms separated by 50 km, for instance, would clean up the entire patch in 10 years.

One caveat, say the researchers, is that converting marine plastics into fuel will ultimately produce carbon emissions. But the amount emitted would be less than that emitted by a ship burning fossil oil making round trips between the garbage patch and port. Plus, converting the plastic into fuel eliminates new fossil emissions while simultaneously cleaning the oceans, a win-win for the environment.