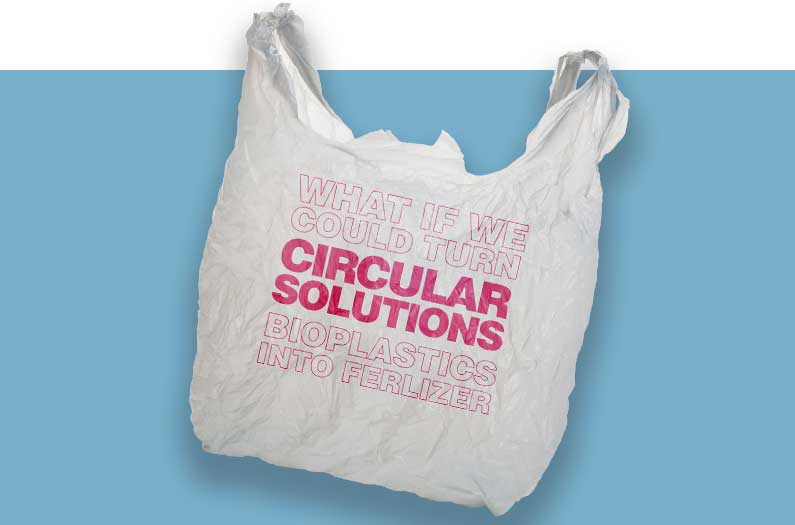 A truly circular solution: Turning bioplastic made from plants into nutrients to grow new crops

A research team has demonstrated a technique to turn bioplastics into urea, cutting back on the emissions associated with making fertilizer
By Emma Bryce
November 5, 2021

Researchers have developed a technique to turn bioplastics into fertilizer, in a process that tackles the twin problems of plastic waste and emissions-intensive fertilizer production.

Unlike regular plastics that are derived from fossil fuels, bioplastics are produced using renewable feedstocks such as corn, wheat, and agricultural waste. From the get-go, these plastics have a lower emissions footprint because they don’t use fossil fuels. But they are often still difficult to break down in nature because the manufacturing process makes them highly durable, similarly to conventional plastics. This means that despite their greener origins, bioplastics may still go on to pollute the environment and even shed long-lived, polluting microfibers into the sea.

But, writing in Green Chemistry, researchers offer a solution that could get us out of this bind, and perhaps even give us more reasons to transition to lower-impact bioplastics. They focused their investigation on a widespread bioplastic called poly(isosorbide carbonate) that’s increasingly being used to replace its fossil fuel plastic counterpart. This  bio-based polymer is made from glucose, from which monomers are derived and linked together with carbonate bonds. This makes a rigid structure that typically takes a long time to break down.

But the researchers discovered that when they chemically recycled the bioplastics—a process that requires the addition of ammonia to break those carbonate bonds—it generates an incredibly useful byproduct: nitrogen-rich urea.

Urea happens to be the key ingredient in many synthetic fertilizers, and typically, this process requires enormously high temperatures and pressure to produce, explains Daisuke Aoki, a chemical engineer at the Tokyo Institute of Technology, and one of the authors of the new study. In fact, the industrial production of urea is so energy-intensive, that it accounts for 2% of global emissions annually.

On the other hand, by generating urea as a byproduct, the researchers’ approach “emits no CO2,” Aoki says. This presents a truly circular solution: bioplastic made from plants gets broken down into its base components, and turned into nutrients to grow new crops. Plus, there’s the additional bonus of removing plastic from the environment more rapidly, and reducing the pollution associated with fertilizers.

But the researchers didn’t stop there: they also wanted to test the quality of the urea they’d produced, and the best way to do that was to feed it to plants. They found that when the fed the recycled, urea-rich bioplastic solution to thale cress plants—a model organism that’s often used in plant research—these seedlings grew much better than plants that were fed a solution of urea alone. This suggests the whole recycled bioplastics can find a second life as a fertilizer for crops.

The researchers hope this new circular approach might provide even more pressure on industries to transition from conventional fossil fuel-derived plastics, to bioplastics made from renewable, plant-based sources. Conventional plastics are typically made using powerful carbon-to-carbon bonds that create a dense structure that’s virtually impossible to break down in nature. This is why conventional plastics persist for decades, even centuries, in the environment.

That persistence comes with huge environmental costs that companies are increasingly being pushed to take responsibility for. But by providing this tantalizing end-of-life solution to bioplastic waste, “this discovery might contribute to a change in the ratio of [conventional] plastics on the market,” Aoki hopes.

What’s more, it could help cut farmers’ input costs, help to bring down agriculture’s enormous emissions impact, and grow more food, the researchers say. “We are convinced that the present study represents a milestone toward developing sustainable and recyclable polymer materials in the near future. The era of ‘bread from plastics’ is just around the corner.”