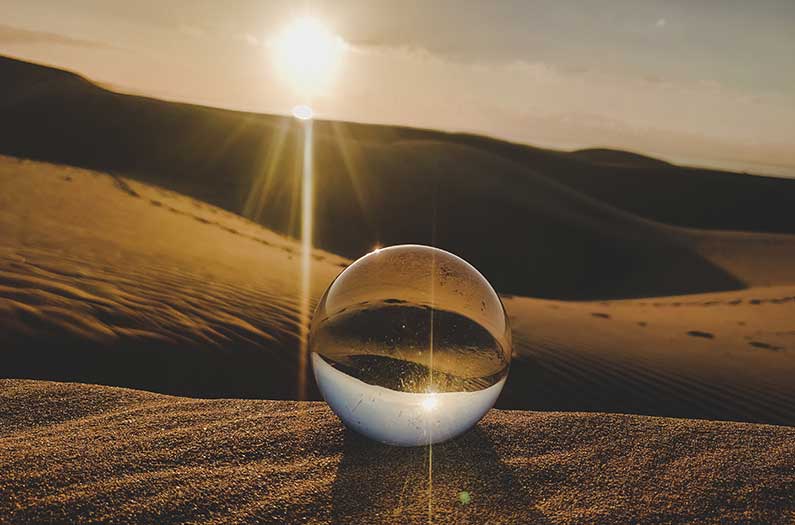 Producing all the jet fuel needed for global aviation would require solar fuel plants covering only 0.5% of the Sahara desert.
By Prachi Patel
November 11, 2021

Scientists have made a pilot-scale solar refinery that efficiently turns carbon dioxide and water plucked from air into liquid fuels. The system takes us one step closer to making carbon-neutral fuels for flying and shipping pretty much anywhere in the world.

The global aviation and shipping industries together produce about 8 percent of manmade carbon dioxide emissions. Battery-powered electric ships and airplanes are one way to reduce emissions, and are already being tested on small scales. But batteries are large, heavy, and expensive especially for long-haul international travel.

A promising near-term solution is to make fuels like gasoline, diesel and kerosene from water and carbon dioxide using solar energy. Of the several ways to do this, an efficient process with high fuel-production rate involves using concentrated sunlight as a source of high-temperature heat.

Aldo Steinfeld and his colleagues from ETH Zurich in Switzerland used this technique for their solar fuel plant. As an added benefit, they use carbon dioxide absorbed directly from air for truly carbon-neutral fuels. And their system also extracts water from air, which means it could produce fuel in desert regions or areas with limited access to water resources.

Their system, reported in the journal Nature, makes fuel in three steps. First, a direct air capture unit absorbs carbon dioxide and water from air using a sorbent bed. Then a solar unit uses solar heat to convert the carbon dioxide and water into a mixture of carbon monoxide and hydrogen. This unit consists of a sun-tracking curved reflector that focuses the sun’s energy onto the chemical reactor. Finally, a third unit turns the syngas into a liquid hydrocarbon such as methanol or kerosene that is used as fuel.

The researchers tested their system successfully on a rooftop, where it produced 32 milliliters of methanol over 7 hours a day. They propose a design for a commercial solar plant made of ten solar towers, with each tower containing an array of solar reactor modules. Such a plant would produce about 95,000 liters of kerosene a day.

All the solar plants needed to produce enough kerosene for the global aviation industry—which used about 414 billion liters in 2019—would have a total land footprint of roughly 45,000 square kilometers, they calculate. That’s 0.5% of the area of the Sahara desert.

Such solar fuels would be more expensive than conventional fossil fuels, however. An analysis of the entire process showed that the fuel would cost 1.4 to 2.3 USD per liter if it were produced on a commercial scale. Regular kerosene jet fuel typically costs about 0.50 USD. The researchers say that the solar fuels would need policy support for widespread use.