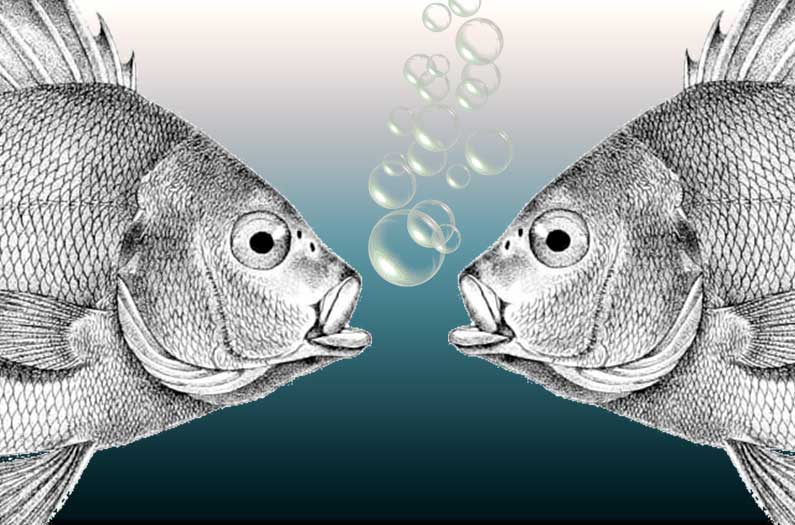 A new analysis shows that it’s cheaper, more sustainable—and just as effective—to make aquaculture feed out of methane from industrial waste, than from forage fish extracted from the sea
By Emma Bryce
November 26, 2021

Researchers have demonstrated that we can solve one food system problem—the huge quantity of feed needed to fuel the growing aquaculture industry, by simultaneously tackling another—the vast amount of methane pollution that escapes into the atmosphere each year and poses an enormous climate change risk.

In a study published in Nature Sustainability, the researchers show that capturing polluting methane gas that’s generated as a byproduct from industrial operations across the United States, then turning it into a feedstock to make protein-rich fishmeal, would be cheaper than making conventional meal from ocean-caught fish. What’s more, this waste methane could already supply 14% of the world’s fishmeal demand. That could expand to 100%, if greater technological advancements allowed us to capture all the stranded methane that exists across the US.

But how does methane become fish food—and why do we need it, in the first place? As global populations rise, large scale fish farming is seen as an increasingly viable way to plug the world’s growing protein gap. The problem is, those farmed fish need food, which is usually made from forage species that are extracted at industrial scales from the oceans and pounded into meal. As the aquaculture industry grows to keep up with demand, it’s putting more and more pressure on these critical marine resources—making it clear that we’re going to need alternatives, soon.

Where methane comes into this equation is that it turns out to be a very reliable feed source for a type of gas-guzzling bacteria called methanotrophs. If these organisms are grown in bioreactors and fed a steady supply of methane, combined with other nutrients such as nitrogen and phosphorus, they can transform those inputs into protein-rich biomass with a very similar nutritional profile to fishmeal. Not only could this bacteria-generated feed replace regular fishmeal, crucially it would also keep massively polluting methane out of the atmosphere: this gas has a warming potential up to 34 times higher than carbon dioxide, making it a major accelerant of climate change.

Feeding methane to bacteria has been on the cards for a while. But the new study is the first to explore the economic feasibility of turning this wasted resource into food. The researchers started by determining how much methane is generated as a byproduct from industrial sources in the US, such as wastewater treatment plants, landfills, and oil and gas facilities. They compared the costs of producing fish feed from these sources, to the production costs of regular fishmeal. They also compared the cost of using these waste methane sources, to that of purchasing natural gas directly from the grid as the primary feedstock for methanotrophs.

Their analysis of these sources revealed, for starters, that making fishmeal from methane pollution would be economically competitive with conventional meal production from fish. In fact, the cost of production is lower especially when methane is captured from landfills, and oil and gas facilities, bringing the price of meal production below the US$1,600 per ton average cost of conventional fishmeal manufacturing, which the researchers used for comparison.

Where methane is captured from wastewater treatment plants, the costs are slightly higher—around US$1,645 per ton—because of the higher labor costs associated with these facilities. If we purchased gas from the grid instead of using waste methane as a feedstock, the price per ton of feed is significantly higher, at almost US$1,800. (This makes a clear case for using the abundant methane that’s pumped out as a waste product at facilities across the country, instead.)

But how much of a difference can this methane capture really make? Looking only at largest industrial oil and gas plants, wastewater treatment plants, and landfills from where it would be most economically feasible to tap methane right now, the researchers showed that methane waste could produce enough fish food through those industrious methanotrophs to offset a significant 14% of the global market, at prices below the current $1,600 per ton average.

There are also countless, smaller methane-producing facilities scattered across the US that aren’t included in this calculation: the researchers worked out that if technological advancements make it easier and more economical to gather methane from these smaller sites, the country could actually produce enough feed to fulfill more than 100% of current global fishmeal demand.

There are already existing alternatives to fish-based feed for aquaculture, such as soybeans and other terrestrial crops. But while they don’t deplete the oceans, these feeds still come with major trade-offs in terms of land-use, water-use, and pollution through fertilizers and pesticides that are used to grow crops. Fattening up bacteria with methane in bioreactors, meanwhile, can produce large quantities of protein-rich feed with a comparatively low footprint in terms of space and resource use, the researchers explain.

It’s a pretty clear win-win: through this approach, polluting methane would be intercepted on its journey into the atmosphere, and diverted to make a more economical and sustainable feed for one of the planet’s fastest growing food sectors.  What’s more, this solution could feed into new global targets to cut back on methane emissions, which have recently been spearheaded by the United States and the European Union—and which many see as key to reaching the climate goals laid out at the COP26 conference.

It’s rare for two problems to be solved at once, but this is one example where it may be possible. “Overall,  reducing  methane  emissions  and  the  overharvesting of marine resources are highly complex problems,” the researchers write. But methane-derived feed “is promising as one part of a suite of necessary interventions for sustainable food production.”