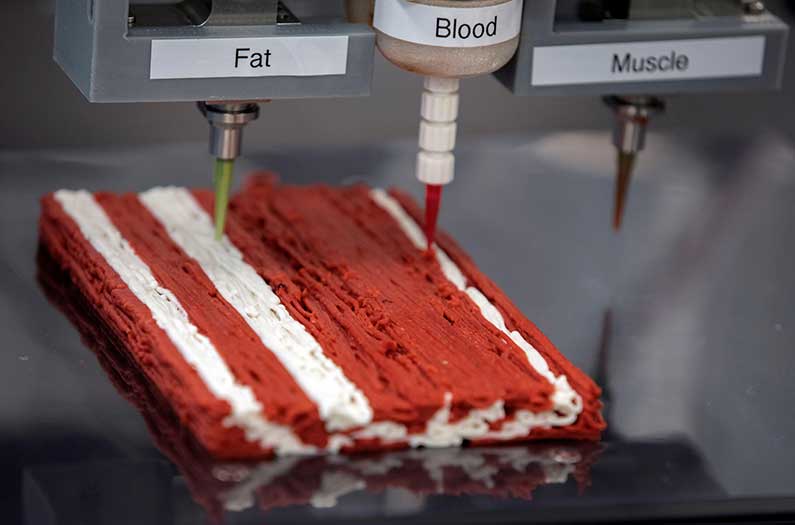 The fatty material liquefies at higher temperatures and congeals when cold, helping the printed meat hold its shape
By Prachi Patel
December 16, 2021

Plant-based meat alternatives are increasingly finding their way onto grocery store shelves and restaurant menus. To make products that have the same taste and mouthfeel as the real thing, cutting-edge startup companies are using 3D-printing to make their fake meats.

And now researchers have created new plant-based gel-like materials suitable for printing. Their formulation, reported in the journal ACS Food Science & Technology, is based on soy protein, wheat gluten and pea protein, and could lead to 3D-printed fake meats that have more meaty texture and nutrition. And their secret is cocoa butter.

As the global population increases and becomes wealthier, the demand for meat, including pork, poultry, and beef, will increase by 73% by 2050. Raising animals for meat already takes up vast amounts of arable land, consumes copious water and energy, and produces tons of planet-warming methane emissions.

Innovators around the world are developing lab-grown meat alternatives that could satisfy some of this demand. Plant-based burgers and minced meat products that mimic the taste and texture of meat have been around for about five years.

Food tech startups such as Redefine Meat, Aleph Farms and CellX are now making 3D-printed meats. Printing allows laying down the protein and fat components precisely to mimic the fibrous textures and marbled complexity of whole cuts of meat such as pork chops and steaks. In September, researchers in Japan printed cuts of fake Wagyu beef, the famous Japanese meat known for its marbling.

Plant-based burgers available on the market today mostly use soy protein and wheat gluten because of “their exceptional ability to mimic meat texture and nutrition,” Shanshan Wang and Songbai Liu of Zhejiang University write in their new paper. But 3D printing fake meat material has typically only used soy protein. None of the printable materials today use wheat and soy.

The researchers made several gel-like dough mixtures using various proportions of sodium alginate, wheat gluten, soy protein and pea protein. They tested the mixtures for the ease with which they could be 3D-printed, and how well they held the printed form, and their texture and microscopic structure.

Cocoa butter, the fatty substance extracted from cocoa beans, turned out to play a key role in the materials’ printability. The fatty material liquefies at higher temperatures, and congeals when cold. When added to the protein mixtures, it helped make the gels easier to extrude from the 3D printer nozzle during the high-temperature printing process. And later as it solidified at room temperature, it helped the printed structure hold its shape.

“The developed strategy in this study would be valuable for formulating materials for 3D printing,” the researchers write.