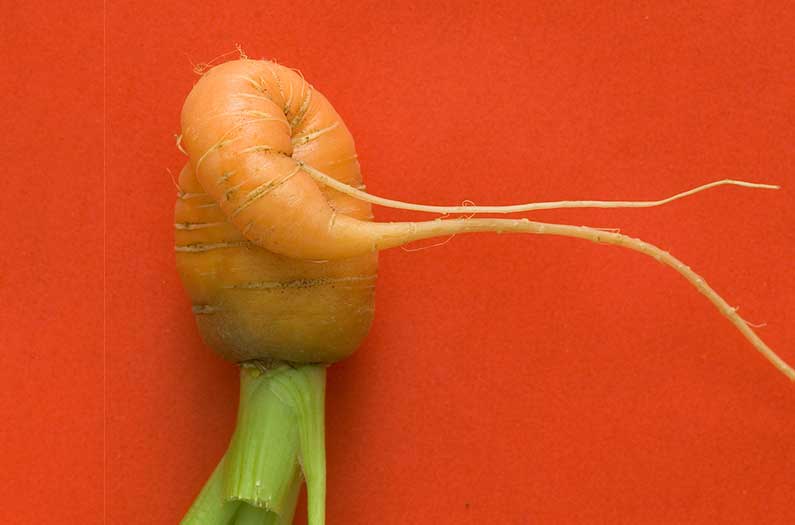 Consumers were convinced to buy the wonky vegetables at higher prices only when they learned of both its sustainability and health credentials.
By Emma Bryce
December 17, 2021

Explaining to consumers why buying a wonky carrot is good for the environment makes them more accepting of its flaws. This transparent messaging, combined with a sales approach to mix ‘ugly’ with ‘regular’ produce, could encourage people to buy misshapen fruitsand vegetables, and help reduce food waste, a new study finds.

Typically, the most common approach to get consumers to buy wonky producehas been to heavily discount it. But that not only does farmers out of earnings; it also creates the inaccurate perception that wonky fruits and vegetables are somehow inferior or less healthy, when actually they reflect the natural variations of the growing process.

So, what if instead of apologizing for this wonkiness, retailers doubled-down and used the produce’s irregularity as a selling-point?

In two separate online experiments involving 1,300 participants based in the United States, researchers tested buyers’ reactions to bunches of carrots. Some were regularly-shaped, and some wonky, but the latter were accompanied by special sales messaging. The researchers discovered that when they described the sustainability benefits of purchasing these carrots, explaining that it helps reduce food waste, and coupled that with the information that wonky produce is just as healthy as regular fruit and veg, consumers were more likely to buy the unusual specimens.

Interestingly, neither of these messages worked as well on their own: consumers were convinced to buy the wonky produce only when they learned of both its sustainability credentials, and its healthfulness.

Yet this sales approach still followed the trope of distinguishing wonky produce from its ‘normal’ counterparts, trading on its ‘difference’ to sell it—when in fact these vegetables are no different in quality or taste. So as a second marketing ploy, researchers decided to investigate how consumers reacted to bunches that contained varying degrees of conventional carrots, and wonky ones. They carried out a series of choice tests, in online tests that mimicked two settings: a conventional retailer or a farmers’ market. Variations on the test gave consumers the option to select bunches of carrots with their leaves still attached, or chopped off, and combined the sales with the above messaging about wonky produce’s sustainability and health accolades.

On the whole, consumers were more open to this mixed collection of standard and misfit carrots in the setting of the farmers market, and they preferred the leafy bunches to the trimmed ones. What’s more, in instances where they received the sustainability and health information alongside the bunches of mixed carrots, a striking 42% of participants said they would prefer to purchase the bunches containing wonky and regular vegetables over and above the bunches containing only conventionally-shaped carrots.

Intriguingly, the researchers also identified the sweets spot for consumers’ acceptance of ugly produce—and that threshold was very clearly 40%. If bunches contained any more than 40% ‘wonky’ carrots, then consumers’ willingness to purchase significantly tapered off.

This set of experiments also revealed something interesting about how consumers’ expectations might alter their choices. At a farmers’ market, buyers’ minds may already be attuned to the idea of ‘organically’- or ‘naturally’-shaped produce, which could explain their receptiveness to buying misshapen produce in this context, and also why they selected the leafier bunches.

Overall, the findings suggest that instead of tossing ‘ugly’ produce, or flogging it at heavily discounted prices, retailers could sell it at a higher profit if its benefits are clearly advertised—and if instead of being singled out, misfit fruit and vegetables is included alongside regular produce.

These insights could help farmers achieve higher prices for their produce, and could help to tackle food waste. That’s needed because the way our food and retail systems are currently set up heavily biases agriculture towards ‘perfect’ produce, which not only affects farmers’ bottom lines but is also unsustainable.

Shifting buyers’ perceptions through messaging, and testing the precise limits of their acceptance, are two important tools that could help to keep more food out of landfills, and more methane out of the atmosphere. In the meantime, perhaps we can slowly shift the acceptance for ugly produce from 40 up to 100%.