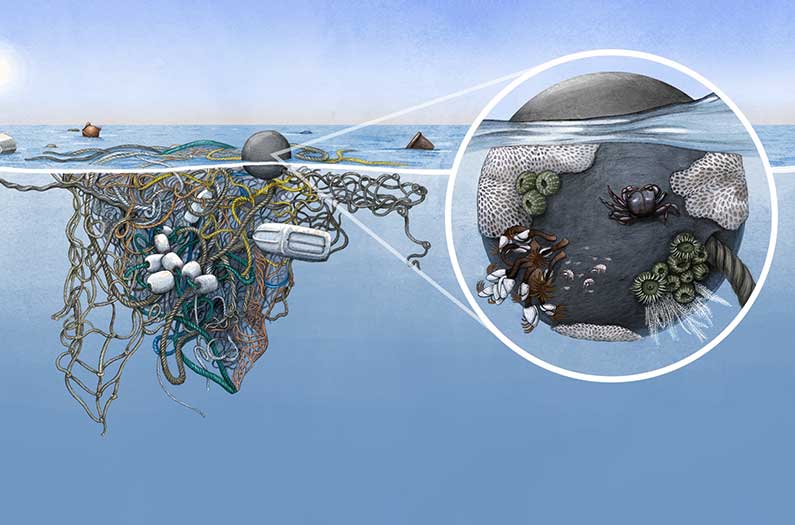 Is plastic trash in the middle of the ocean becoming a new kind of island habitat?

Giant patches of plastic floating in the ocean have become home to an experiment in a new hybrid ecosystem, made up of stowaway species from coastal environments and organisms that dwell in the middle of the Pacific. Meet the "neopelagic" world.
By Warren Cornwall
December 15, 2021

Finding a sea anemone bobbing in the middle of the ocean is a bit like stumbling across a rainforest-dwelling kapok tree perched on a Saharan sand dune. Yet, that’s what has happened in recent years as people sailing the Pacific Ocean in search of plastic trash capture entire communities of coastal organisms clinging to debris hundreds of kilometers from the nearest beach.

The discovery of sea anemones, tiny shrimp-like creatures and fan-shaped polyps that normally dwell near the shore, seemingly thriving in the ocean on small islands of trash, is forcing scientists to rethink basic assumptions about where different species can live. They have even proposed a new name for this type of community—neopelagic, or “new open ocean.”

“The open ocean has not been habitable for coastal organisms until now,” said Greg Ruiz, a marine ecologist who heads the Marine Invasions Lab at the Smithsonian Environmental Research Center and was part of the team studying the phenomenon. “Partly because of habitat limitation—there wasn’t plastic there in the past—and partly, we thought, because it was a food desert.”

It’s long been known that shallow-water and even land species can cross parts of an ocean. Scientists think such voyages help explain how islands were settled as organisms drifted on flotsam cast into the sea. But these were thought to be relatively short trips aboard natural objects such as trees that would eventually decay.

The 2011 tsunami that struck Japan delivered hints that such journeys might stretch further and last longer. Debris from the disaster washed ashore in Hawaii and North America up to six years later, bearing a total of nearly 300 live marine species native to the Japanese coast. Many of them made the trip on plastic or metal objects such as buoys and part of a dock.

That prompted researchers to launch a more organized search for coastal creatures adrift in the open seas. Starting in 2018, scientists funded partly by NASA enlisted individual sailors as well as trash-collecting organizations to capture samples from the Great Pacific Garbage Patch, the largest of five known places in the ocean where plastic trash concentrates thanks to swirling ocean currents or gyres. Scientists from the Smithsonian center then scrutinized the trash to see what critters had made these floating hunks of plastic their home.

The researchers discovered a novel amalgamation of species, some that dwell in the open ocean and others far from their native coastal habitats, according to a Dec. 2 report in the journal Nature Communications. Gooseneck barnacles that normally live on floating ocean debris shared space with polyps typically found on seaweed and rocks near the shore. Open ocean crabs scuttled by anemones they would typically never encounter. A mix of different ecological worlds was found on things as small as a single plastic bottle, as well as large tangles of fishing nets, buoys and other debris. All told, they found dozens of nearshore organisms, said Ruiz.

Read:  We need a greener, healthier alternative to palm oil. Scientists may have found it in algae

The discovery has scientists grappling with the potential implications, as well as questions about how these creatures are managing to survive in a place far different from their native homes. Much of the ocean surface is relatively food-poor, with less of the nutrients that fuel plankton growth. It’s not clear if the plastic is acting like a reef that attracts more sources of food, or if it happens to drift through more productive spots in the ocean, said Ruiz

The discovery also has scientists wondering how the creation of what amounts to new artificial habitat spanning large parts of the ocean might scramble existing ecosystems and expectations about where certain species occur and how they might invade other places. For instance, how will species that evolved to live in the open ocean fare when they encounter these newcomers?

Existing species that ply the ocean surface have evolved a variety of survival strategies. The violet sea snail blows bubbles that suspend it upside down. A jellyfish-like creature floats the seas with a tiny “sail” that catches the wind.

The scientists are now working on a series of papers exploring the phenomenon in more detail, including cataloguing the different species found and modeling how these objects are likely to move about in the ocean, colliding with one another and then splitting apart again.

It will take future expeditions to answer questions about the ecosystem dynamics of these places, such as the composition of food webs. And that, said Ruiz, will require an infusion of new funding.

The room for these novel “island” ecosystems is likely to only grow. By 2050, the plastic flowing into the ocean could quadruple from today’s levels to more than 30 million metric tons per year, according to some forecasts. That’s a lot of neopelagic habitat.

Haram, et. al. “Emergence of a neopelagic community through the establishment of coastal species on the high seas.” Nature Communications, Dec. 2. 2021.