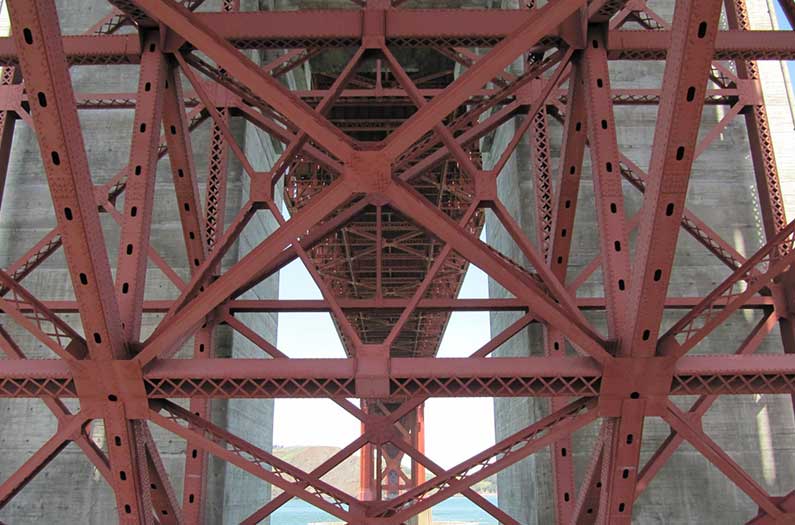 MIT team's new tool could let builders design timber–steel trusses that cut the material-related emissions of structures by over 10%
By Prachi Patel
December 2, 2021

A new computational tool developed by researchers at MIT could let architects and engineers lower the carbon footprint of buildings and bridges. The tool helps designers pick the best material that minimize carbon emissions of trusses, those crisscrossing structures of beams and struts used to construct bridges, antenna towers, and buildings.

“Construction is a huge greenhouse gas emitter that has kind of been flying under the radar for the past decades,” says professor of civil and environmental engineering Josephine Carstensen, who led the new work published in Engineering Structures.

Buildings are responsible for 40 percent of global carbon emissions, and are some of the largest energy consumers in the world. That’s partly because of the energy-intense materials used in modern construction, such as cement and steel.

Efforts to reduce the carbon footprint of buildings has focused mainly on cutting energy consumption. While there are a few recent nascent efforts to decarbonize cement- and steel-making, and to make large structures from wood, there has not been much large-scale progress on reducing the environmental impact of construction materials. The new computational tool that Carstensen and her colleagues have developed could help chip away at that impact.

The researchers focused on trusses, which are typically made of wood or steel or a combination of both. These materials have built-in carbon emissions that come from the way they are produced. Mining and smelting steel, for instance, requires an immense amount of fuel. Producing every ton of steel releases about 1.85 tons of carbon dioxide on average, resulting in about 8 percent of global carbon emissions.

Wood also has some embodied carbon from the fuel used in felling and processing trees. But in general its carbon footprint is smaller than that of steel. The compromise is that it does not have the best properties for trusses in some applications. For instance, it is excellent at withstanding forces of compression, but not as well as steel when it comes to forces of tension that pull materials apart. It is also heavier.

Picking the right combination of the two materials for a truss design would provide optimal performance while generating fewer carbon emissions. The MIT researchers have come up with an algorithm that helps designers do that.

Designers would input factors such as the load that a structure has to bear, the cross-sectional area and the material composition of each truss element. The algorithm takes those variables into account and computes the best truss design made with a mix of glue-laminated timber and steel elements to minimize the global warming potential of the structure.

To demonstrate the tool, the researchers used it to re-engineer various trusses. The new designs cut emissions by at least 10 percent. Carstensen says the tool could potentially help to save two to three times that amount. “It’s about choosing materials more smartly.”