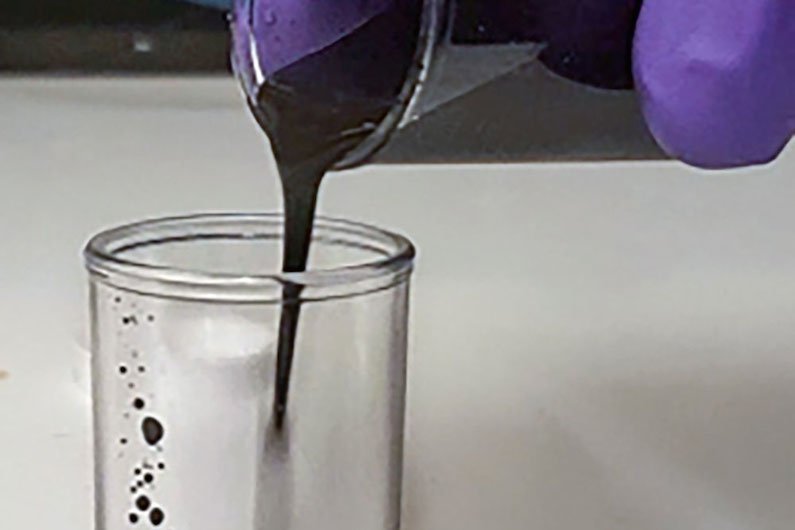 The syrupy manganese-based liquid can store energy for months at a time, dramatically reducing the the cost of flow batteries
By Prachi Patel
December 9, 2021

To keep power flowing on the grid when it’s dark and still, it will be key to store massive amounts of solar and wind energy. One battery technology called flow batteries hold promise for large-scale energy storage, but they still need affordable, plentiful materials.

A new slushy electrode material the texture of molasses could fit the bill. MIT engineers who reported the black, syrupy material in the journal Joule say that batteries they made using the material work just as well as state-of-the-art vanadium-based flow batteries but would cost much less.

Flow batteries store chemical energy in liquid held in large tanks. The liquid electrolytes are pumped across a membrane, where a ion exchange either discharges the battery, so it can provide electricity, or charges it back up. The liquids can store energy for months at a time, and storing larger amounts of energy means simply increasing the size of the tanks.

But while flow batteries are cheaper than lithium-ion batteries, the most commonly used chemistry today relies on vanadium, which can be expensive and is typically produced as a mining byproduct. Mechanical engineer Yang Shao-Horn and colleagues wanted to find a lower-cost, more abundant alternative.

They experimented with several electrically conductive materials. Their choice in the end was manganese dioxide, which they made into a semi-solid paste-like mixture along with carbon black. Then they made a prototype flow battery in the laboratory using this manganese oxide-based electrolyte.

In the battery, the paste is pumped to the membrane, where it reacts with a conductive zinc solution or zinc plate to produce electricity. Pumping the slurry mixture does require 8 to 50% more power than pumping liquid electrolytes. But even then, the researchers’ calculations showed that the battery cost less than vanadium flow batteries or lithium-ion batteries when it was used to provide electricity for longer than a day.

The team now wants to scale up the battery and improve the design of the semi-solid electrolyte and the whole system to reduce the power needed to pump the electrolytes.