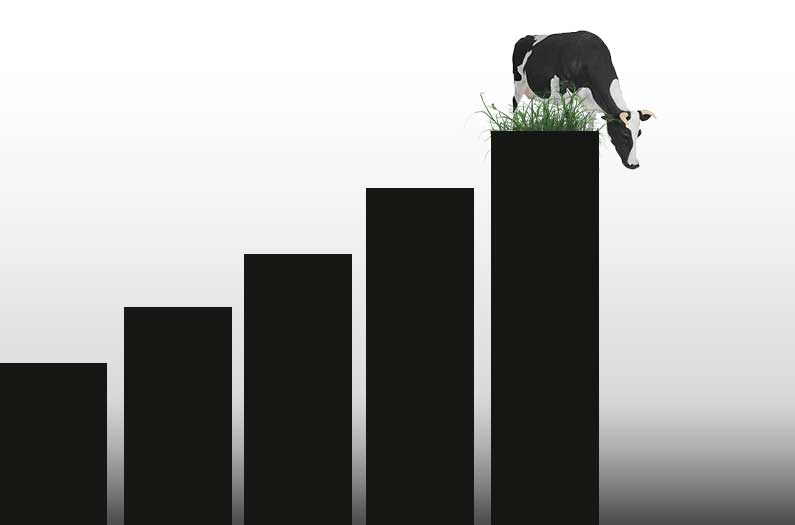 These countries have reached ‘peak meat’

Above $40,000 GDP per capita, several countries seem to make a voluntary shift away from meat, a new analysis finds.
By Emma Bryce
December 10, 2021

Meat consumption is growing globally. But a handful of countries are bucking this trend, and their appetite for meat is in decline. A group of researchers argues that these nations—New Zealand, Canada, and Switzerland—have in fact reached ‘peak meat’, a point beyond which increasing income no longer tracks with increasing consumption of beef, chicken, mutton, and pork.

This could be an important discovery, because reducing meat consumption is recognized as a critical route to bringing down greenhouse gas emissions. In light of this, the group of Australian researchers were curious to see how consumption trends changed between 2000 and 2019, which covers a period of growing awareness about meat’s impact on the planet, but also a time when those environmental impacts intensified. They examined levels of meat consumption in 35 countries over this period, and combined this with information about gross domestic product (GDP), a measure of the size and health of a country’s economy.

Somewhat unsurprisingly, their analysis revealed that meat consumption rose globally over this period, with people consuming an average 4.5 kilograms more meat in 2019 than in 2000. But this finding also contained some unexpected insights—namely into the makeup of that diet.

The data shows that across most of the 35 sampled countries, consumption of beef, pork, and mutton is actually declining. Meanwhile, chicken consumption has significantly ramped up across almost all the studied countries. The appetite for chicken was especially pronounced in Russia, Malaysia, and Peru, where consumption increased by 20 kilograms per capita over the 19-year period.

This suggests that chicken is the main driver of rising meat consumption globally, something the researchers think may come down to the greater efficiency with which these birds convert grain into protein. Though, this chicken boom also comes with a growing threat of avian disease, the researchers warn.

Not everyone is eating more meat, however. The researchers discovered that nine countries in their sample are actually eating less, including Nigeria, Ethiopia, and Paraguay. In these nations, the decline seems to be driven by unpredictable weather patterns and increasing incidence of disease, both heightened by climate change, which is causing livestock declines and limiting the availability of meat.

But it was when the researchers viewed those nine countries more closely through the lens of GDP, that they came to their most surprising finding. In three of the nine nations—Canada, Switzerland, and New Zealand—increasing GDP is matched by declining rates of meat consumption. That’s not a trend you’d expect given that higher GDP typically reflects more per capita income, which historically has tracked with more consumption of meat, because it is expensive.

Yet, for those three very wealthy, high-GDP nations, the reverse is now true. For instance in New Zealand, meat consumption declined by more than 10 kilograms per person between 2000 and 2019. Even with more economic freedom than most other countries, it seems these nations are voluntarily moving away from beef, chicken, pork, and mutton. Or, as the researchers put it, they’ve reached ‘peak meat’.

What’s more, there seems to be a precise economic tipping point for this shift. When the researchers went back through the data, they found that in countries where GDP does track positively with meat consumption, it only seems to do so up to US$40,000 GDP per capita. Beyond that figure, the per capita consumption of meat begins to decline.

So what’s behind this shifting attitude towards meat in wealthy nations? The researchers hypothesize that it comes down to a mix of factors, such as growing health awareness, the rise of animal rights movements, and vegetarianism. Policy seems also to have played a powerful role in places such as Canada, where limiting the national consumption of red meat is part of an official government healthy-eating strategy.

The study looked only at GDP as a consumption driver, but the authors note that there are many other factors that were beyond their scope to investigate, such as the role that culture and religion play in shaping diets. These could be an important feature in limiting meat consumption in many countries that are less wealthy than those top-GDP nations, and their interplay with diet and environmental impact deserve attention in future research, they say.

Meanwhile, this current study offers two main takeaways. First, that we should be cautious about the explosive rise of chicken. Second, that there’s now a voluntary decrease in meat consumption in countries where it was historically highest, which sets a hopeful precedent for where the world’s headed. Shifting attitudes to meat, combined with the growing availability of plant-protein alternatives, means “the period ahead is likely to be very different,” the researchers believe.

Phillips et. al. “Are We Approaching Peak Meat Consumption? Analysis ofMeat Consumption from 2000 to 2019 in 35 Countries and ItsRelationship to Gross Domestic Product.” Animals. 2021.