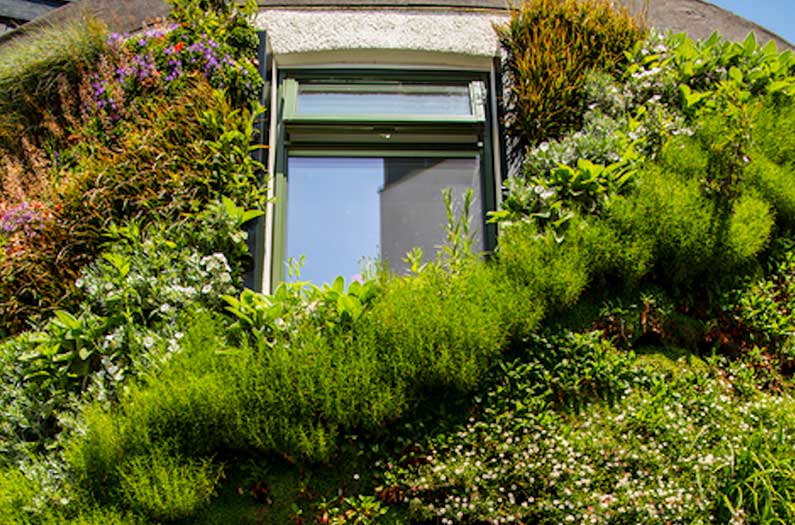 A living wall composed of pockets of greenery installed on the outside of a building can shrink the amount of heat lost through an un-insulated wall by nearly one-third, according to a new study.

The findings suggest a new strategy for making older buildings more energy efficient. “Living walls have the potential to contribute to the improvement of the overall thermal performance of existing buildings,” says study team member Matthew Fox, a lecturer at the University of Plymouth School of Architecture in the UK.

That’s important because the majority of buildings in England—and in many already urbanized parts of the globe—were built before modern standards for energy-efficient construction were in place. The study also adds to the list of benefits of living walls, an increasingly popular form of green infrastructure that has been shown to increase biodiversity, provide pollution control, and help keep buildings cool in summer, Fox adds.

Fox and his colleagues studied a living wall covering one section of the façade of a two-storey building on the University of Plymouth campus. The wall included sedges, ferns, rushes, and flowering shrubs planted in a fabric covering attached to the outside of the building.

The building was an example of masonry cavity construction, which consists of two layers of brick or concrete block separated by a pocket of air. Such buildings are notoriously bad at holding heat, especially when uninsulated—and account for a lot of the building stock in the UK and parts of Europe, North America, and Asia.

The researchers installed sensors to monitor heat flux and temperature on both sides of the living wall, as well as a nearby section of untreated wall on the same building. They collected data for 5 weeks in November and December of 2019.

The amount of heat lost across the living wall section was 31.4% lower than that of the untreated section, the researchers report in the journal Building and Environment. This improvement in performance is similar to what could be achieved by filling the wall cavity with insulation.

There have been relatively few real-world studies of how living walls perform on actual buildings, especially with respect to holding heat. “We should be cautious as the research here is of only one wall,” Fox says of the case study results. “However, we should also be optimistic as there is nothing unique about the building or location. It is likely these results have application more widely.”

Fox and his collaborators are now digging into the details behind their findings. “The study raises the important question of which part of the living wall is providing the biggest thermal performance benefit?” he says. “I.e., is it actually the plants, the soil or the construction of the living wall system that is providing the heat loss reduction? Also, how can living walls be designed to maximize the potential thermal benefits?” The researchers are conducting follow-up studies to find out.