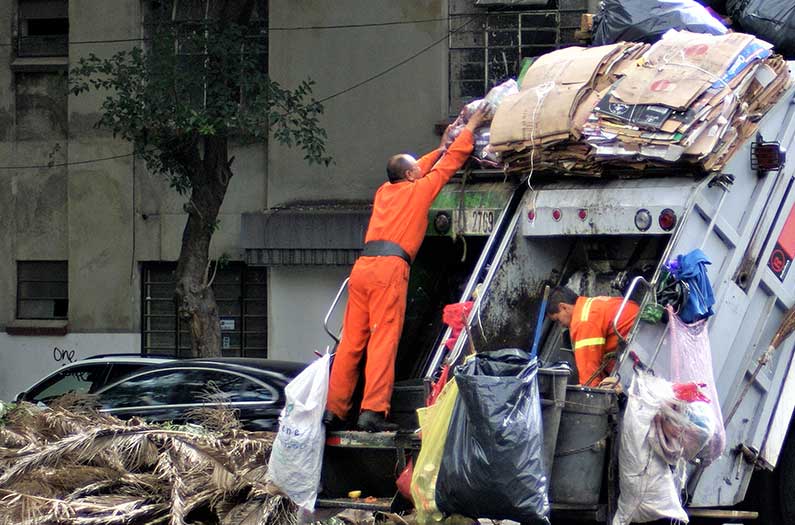 Garbage accounts for 8% of human-caused emissions of methane. A recent analysis found that switching to circular waste management could reduce emissions from garbage by as much as 88% by 2050.
By Sarah DeWeerdt
January 18, 2022

A new study suggests that by 2050 the world could largely eliminate an entire source of air pollution, which currently contributes 150 million tonnes of carbon dioxide emissions annually – just by changing how we throw things away.

The amount of garbage produced is growing every year as the global population increases and gets wealthier. Global generation of garbage could nearly double between 2015 and 2050.

Often, that garbage isn’t managed very effectively. Only about 13% of garbage is recycled and 5.5% composted; in less wealthy countries, garbage often ends up in unmanaged dumping sites, scattered over the landscape, or openly burned.

To learn more about the future climate impact of trash and how to minimize it, researchers gathered data on waste management in 184 countries and regions, covering both rural and urban areas. They used a set of scenarios known as Shared Socioeconomic Pathways, which are frequently used by researchers and policymakers to project how the global economy might develop in the next decades, to estimate the amount of trash and associated greenhouse gases and other pollutants that will be produced in the future.

Circular waste management emphasizes technologies and policies that, first and foremost, encourage reuse and recycling of materials. Material that can’t be recycled is burned in high-tech incinerators to generate energy, and the landfill is a last resort.

The researchers assumed that circular waste management scenarios would achieve pickup of all the world’s trash by 2050, recycle 90% of paper and textile waste and 80% of plastic and wood, and send 100% of food waste to anaerobic digesters that produce biogas for energy.

A scenario in which the world develops both an equitable and sustainable way has larger and faster potential to reduce the environmental impact of waste than a one that relies on technological advances to deal with pollution after it is produced, the researchers report in Nature Communications. Adding circular waste management on top of that sustainability/equity development path yields the best-case scenario, they found.

Garbage currently accounts for 8% of human-caused emissions of methane, a powerful greenhouse gas. If current waste management practices continue, that will increase to 13% in 2050, the researchers estimate. But the best-case scenario could reduce 2050 methane emissions from garbage by 88% compared to business-as-usual.

Less wealthy countries often lack robust waste management systems, and a substantial amount of their garbage ends up being burned, releasing carbon dioxide and other air pollutants. Burning of trash is currently responsible for about 150 million tonnes of carbon dioxide emissions annually and 6% of global black carbon emissions. With circular waste management it “will be feasible to virtually eliminate open burning and therefore this source of air pollution already in 2030,” the researchers write.

Putting such practices in place will require new laws and policies, as well as capacity building and financial assistance from wealthy to less wealthy nations. And it will require action by individuals, Gómez-Sanabria says: “The main change we can introduce in our behavior is to consume less and consequently less waste will be generated. Although recycling is important for a circular economy, reusing should be considered first.”