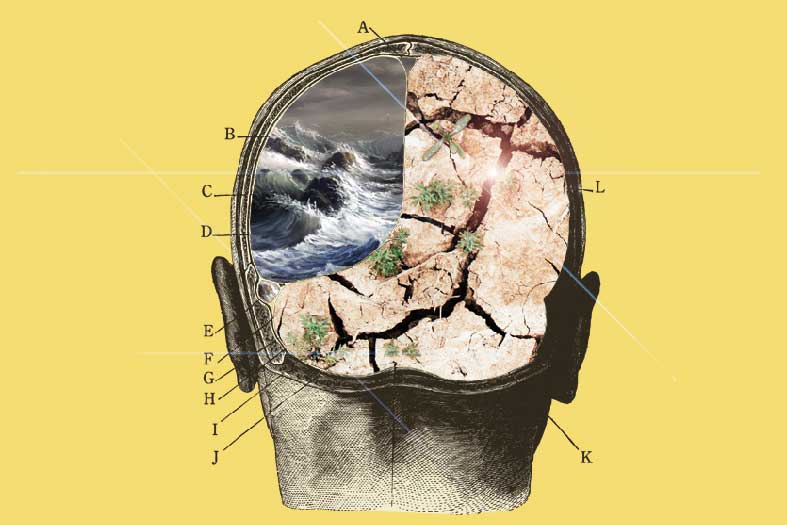 The secret may lie in the temporo-parietal junction, the seat of our ability to imagine the lives of others—including people in the future
By Sarah DeWeerdt
January 25, 2022

Stimulating a brain region called the temporo-parietal junction (TPJ) makes people more likely to make sustainable decisions in a laboratory experiment mimicking a situation where overuse of a resource harms people in the future, according to a new study.

The findings provide hints about how to motivate people to make sacrifices now for the sake of the future climate. “Our study is among the first neuroscientific investigations into sustainability and we were interested to study the basic mechanisms at the core of sustainable behaviour,” says study team member Daria Knoch, professor of social neuroscience at the University of Bern in Switzerland.

Knoch and her colleagues wanted to understand a paradox of climate psychology: people say they are worried about climate change and want to stop it, but often fail to take climate-friendly actions.

The researchers suspected that climate action is difficult because it requires making sacrifices today to benefit strangers in the future whom we will never know. We have trouble identifying with those strangers, imagining what they will think and feel. Neuroscientists call this process mentalizing – specifically, in this case, intergenerational mentalizing.

“The basis for sustainable behaviour is the knowledge that climate change is real and a threat. What we often see, however, is that these hard facts aren’t enough,” says study team member Benedikt Langenbach, a psychologist and postdoctoral researcher at the University of Duisburg-Essen in Germany. “To motivate people for sustainability, it could be important to make sure they understand that their behaviour (be it voting decision, consumption patterns or travel choice) actually has an impact on the wellbeing of other human beings.”

To test their hypothesis and find out whether it’s possible to bolster intergenerational mentalizing, the researchers designed a laboratory experiment: groups of 4 participants played a game in which each person decided – without any communication with others in the group – how many “fish” to remove from a common pool. Participants got real money for each fish at the end of the experiment, so they had motivation to maximize the number extracted.

However, if the group withdrew too many fish, participants were told, then the payoff would be drastically slashed for the next group to come into the lab. Similar “fishing” games are a well-established research tool in behavioral economics and the study of social behavior.

Each group could take up to 36 fish before triggering the payoff cut. So on average, each participant could take up to 9 fish without messing things up for the next generation in the study.

During some sessions of the game, the participants received non-invasive electrical stimulation through electrodes placed on the scalp to stimulate activity in the TPJ, a brain area that plays a starring role in mentalizing. Without this stimulation, people only limited themselves to 9 fish or fewer about 40% of the time, the researchers report in the journal Cortex. Only about one-third of participants made sustainable decisions more than half the time, and one-third didn’t make a single sustainable decision.

But stimulating the TPJ significantly increased the number of sustainable decisions people made, from an average of just under 3 to just under 4 sustainable choices per round of the game.

The findings suggest that a failure of intergenerational mentalizing is a factor that contributes to climate inaction. “In the past, sustainability was often framed as either a technical problem, or a rational-choice problem,” Langenbach says. “Our study supports the notion that a stronger focus on social aspects (like mentalizing) is crucial to tackle climate change.”

Knoch’s team is conducting a neuroimaging study to better understand the mechanisms behind intergenerational mentalizing. “In the future, other researchers might want to pick up on our findings to investigate how our results can be translated into concrete campaigns,” she adds. “For example, can communication that facilitates mentalizing lead to more support for climate-friendly policies like a carbon tax or green energy?” In other words, concrete examples of people who will be harmed by climate change may be more effective than vague references to a “future generation.”