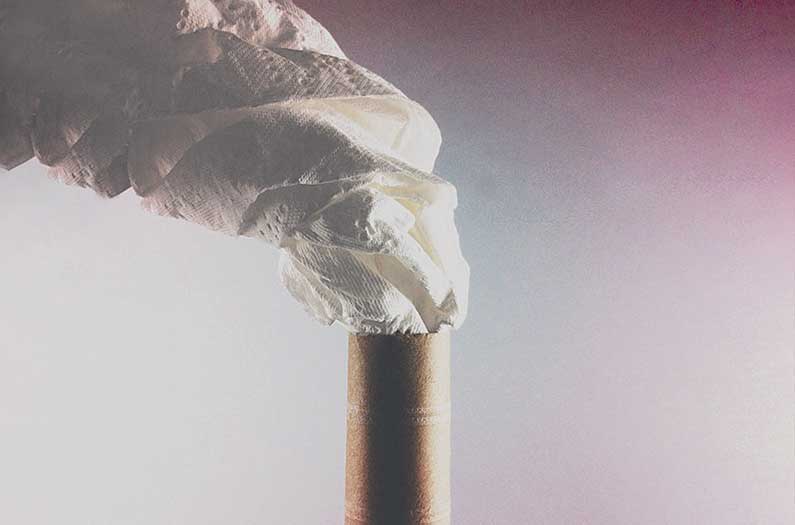 Off-grid energy production is becoming affordable for smallholders, restaurants, and even families—thanks to a startup’s innovative biodigesters that turn food and feces into carbon-neutral cooking gas, fertilizer, and hot water.

One day in 2006, a soul-searching, globe-trotting student named Yair Teller climbed a tall mountain in southern India and had a life-changing experience. At 27, Teller had taken a year off from his studies of marine science and water ecology at the Ruppin Academic Center in Israel to figure out what good he might do with his degree.

On his way up the mountain, Teller stumbled upon a farm, and the family invited him for a cup of chai. As they put a pot on the stove, Teller marveled at its sootless blue flame. How could they have gas? Gas stoves are rarely seen in the rural parts of India, a country where about two-thirds of residents cook on open fires fueled by wood or agricultural refuse—much to the detriment of their health. This was the first smokeless kitchen he had seen there.

“Where do you get the gas?” the awed Teller asked his hosts. Walking outside, the farmer showed him a covered concrete pit with a pipe that led into the kitchen.

“We have a lot of cows, so we sweep their dung into the pit to ferment,” the farmer explained. “That gives us gas and liquid fertilizer. We use the gas to make that beautiful blue flame you saw, and we pour the fertilizer onto our fields to grow food.”

From his studies, Teller was quite familiar with the biological transformations happening inside the fermenting dung as microorganisms eat through it—hence the formal name of a pit like this: a “biodigester.” In go cow pats, out come liquid manure and a biogas consisting mainly of methane and carbon dioxide.

With the Indian government picking up half the cost, Teller’s hosts and other villagers had built biodigesters that fueled both their kitchens and their farms, independent of any grid or commercial provider.

Teller instantly knew what he would do with his degree. “I want to build systems like this and make people’s lives better,” he remembers thinking. And not just in the poorest parts of the world, though that is where biogas offers the biggest boost to people’s quality of life. Teller believed that he and others could refine the humble biodigester into a trendy product that even Americans, Europeans, and other rich consumers could set up in their backyards—mainly for the rich fertilizer that tumbles out of it. The net-zero-carbon gas that comes out for the grill or stovetop would be a bonus. At a larger scale, the systems could generate hot water for restaurants and other small businesses, replacing fossil gas and lowering their utility bills. Globally, the potential could be huge.

It was a grand, ambitious vision—and remains mostly that. But today Teller’s company has sold thousands of residential biogas systems all over the world, and in 2022 it aims to launch a larger version designed for small companies. Although those units are mostly fueled by food and farm scraps, human feces can also work as fuel. In Houki, Japan, for example, the water in the popular public bath is heated by boilers that burn pellets made from recycled adult diapers—a waste stream that is burgeoning as the population ages.

The twenty-first-century biodigester looks a bit like an inflatable camel resting on the ground. Just as in a real camel, the hump swells to store  energy as digestion proceeds. 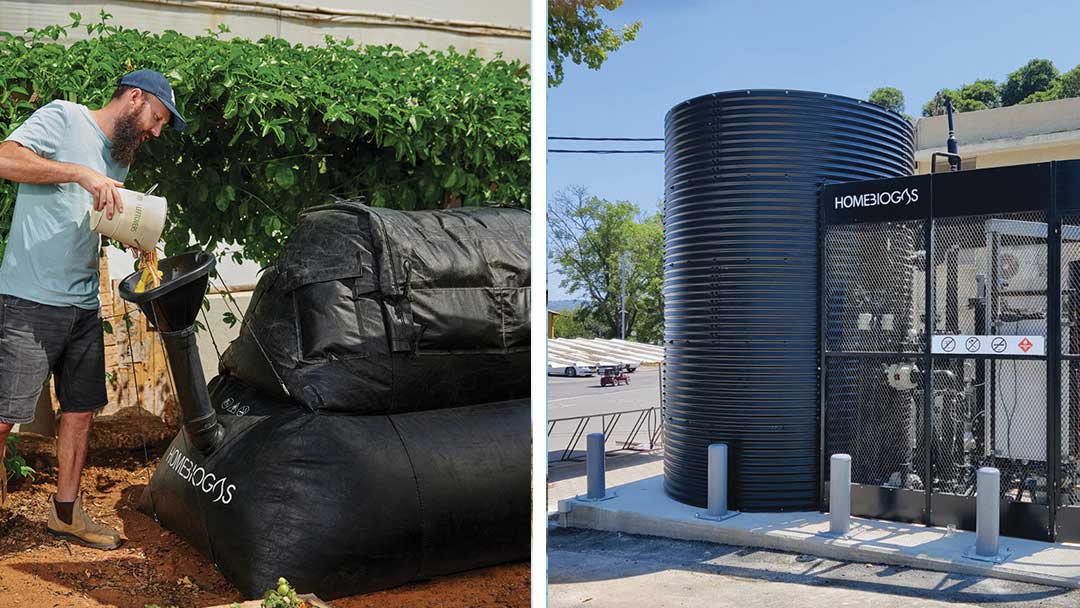 After passing through a filter to remove odors, the gas travels through a tail-like hose that connects to a stove—or, in the commercial version, a hot-water heater.

The World Health Organization estimates that 2.6 billion people still cook on open fires combusting whatever fuel is at hand: wood, charcoal, crop wastes, kerosene, or animal dung. The soot—also called black carbon—that streams from cookfires settles in the lungs of both people and other animals, especially women and children who spend the most time indoors. The WHO attributes 3.8 million premature deaths each year to the excess pneumonia, stroke, heart disease, lung cancer, and many other disorders caused or exacerbated by exposure to these particulates—a toll greater than that from malaria, HIV, and tuberculosis combined.

The soot also accelerates global warming. In India, in particular, it floats over the Himalayas, blackening the ice and soaking up sunlight, melting glaciers ever faster.

Rich countries switched long ago from sooty stoves to those heated by electricity or fossil gas. But the cost of the grids and pipelines needed to bring those to homes is far beyond the means of many nations. In much of the world, a way to make cooking gas right at home—from the ultimate waste product, no less—would improve the quality of life tremendously.

After finishing his degree, Teller began building, for people in rural communities around the world, biodigesters like those he had seen in India. He set them up for desert Bedouins who shepherded goats and sheep. He helped install them in Mexico’s countryside. But after some time, he realized the serious limitations of fermentation pits.

The set-up seems simple enough. Dig a hole in the ground, line it with bricks and concrete, add a domed roof to catch the methane, stick a pipe through it—and now you’re cooking with gas. But that simplicity is deceptive. Building and maintaining a pit biodigester involves a substantial investment of money, time, and physical labor. Within a few years, shifting ground, floods, and frosts often cause cracks. The systems begin to leak, stink, and present fire hazards. Experts estimate that about half of the 40 to 50 million biogas domes built in China, India, Africa, and Mexico to bring fuel to rural settlements have lapsed into such disrepair that they no longer work.

So Teller started to work, designing a low-maintenance biodigester that was affordable, easy to set up, compact and sanitary enough to use in a city or suburb—a self-contained, odor-free, out-of-the-box digester that anyone could buy online with just a few clicks. And that’s how Home-Biogas was born.

The twenty-first-century biodigester manufactured by the startup that Teller founded with his friend Oshik Efrati in Beit Yanai, Israel, looks a bit like an inflatable camel resting on the ground. A mouth-like funnel on the neck accepts organic waste—anything from spoiled or leftover food to pet droppings or honey-bucket sludge. On average, the bacteria inside take about 60 days to decompose freshly added waste. Just as in a real camel, the hump at the top swells to store the energy-rich fuel that accumulates as digestion proceeds. After passing through a filter to remove odors, that gas travels through a tail-like hose that connects to a stove—or, in the commercial version, a hot-water heater. From the rear end of the device drips the other valuable output—a brown, goopy liquid that can be a potent fertilizer and which slowly accumulates in a pail.

Teller himself has equipped his own privy with a manual pump that needs only one-sixth the amount of water used to flush a standard toilet, and he now makes biogas and fertilizer from his family’s waste. But “food waste is a much safer topic,” he says. No one is afraid of stale bread or banana peels.

Efrati and Teller maintain that the liquid fertilizer is completely safe to use for growing produce—they fertilize their own vegetable patches with it. Those concerned about germs can add a tablet of chlorine to disinfect the fertilizer as it passes through the end nozzle but later evaporates from the bucket.

“We wanted to build an IKEA-furni-ture type of biogas system,” Efrati says. “You pop it out of the box, you follow instructions—and it works.” A conference HomeBiogas hosted in early 2018 drew about two dozen participants from all over the world, each with their own reason to introduce digesters at home. A businessman from the Ivory Coast who owned a palm-oil company wanted to convert his rotting biomass leftovers into biogas. Two men from Ghana wanted to alleviate the country’s sanitation crisis by turning waste into energy. Three women came from the Philippines, where the government wanted to distribute waste-recycling technologies to the masses. An appliance reseller from Brazil thought this system would be very popular at home because it could save people money on energy bills. And there was even a computational geoscientist from the Los Alamos National Laboratory in New Mexico, Elchin Jafarov. His work on melting Arctic permafrost and the subsequent greenhouse gas emissions sparked his curiosity about the biodigesting process.

For the United States, where energy is cheap, the selling point for biodigesters may lie with the organic fertilizer they generate. “At my local farmers’ market, eight ounces of organic fertilizer cost $8,” Jafarov notes. At these rates, the HomeBiogas system would pay for itself within days—it fills a five-gallon bucket within a week.

As for fire hazards, no regulations prohibit digester use—because the systems contain such a small amount of gas, kept under such low pressure, that even in the case of leakage, the camels wouldn’t cause any accidents.

In countries where energy is expensive, HomeBiogas can represent substantial savings. But affordable, durable biodigesters could make the biggest difference in places where women have to gather fuel, carry it on their backs, cook on open fires and breathe the smoke—all while caring for little children who inhale the same smoke alongside them.

The HomeBiogas team estimates that about 6,000 families who use their systems in Africa and Asia now breathe clean air and use renewable energy during the 6,400,000 hours they spend cooking each year. Add to that the 58,000 or so tons of carbon emissions avoided. For an IKEA-furniture type of waste repurposing system, it’s not a bad start.

Now we need to spread the word, Teller says. While he trots the globe, demo-ing his puffy camels, the company is pushing its light-industrial system through the final stages of design, testing, and manufacturing. With each system rated to accept up to a ton of waste every day, generating up to a million BTUs of renewable biogas each year, restaurants, hotels, hospitals, and other commercial kitchens could soon be filling their dishwashers with water heated by the very food they scraped into the bin a few weeks before.

Raised in Russia, Lina Zeldovich watched her grandfather fertilize the family’s organic orchard with composted sewage and thought the whole world did the same. This article is adapted from her recent book, The Other Dark Matter: The Science and Business of Turning Waste Into Wealth and Health. University of Chicago Press, 2021.