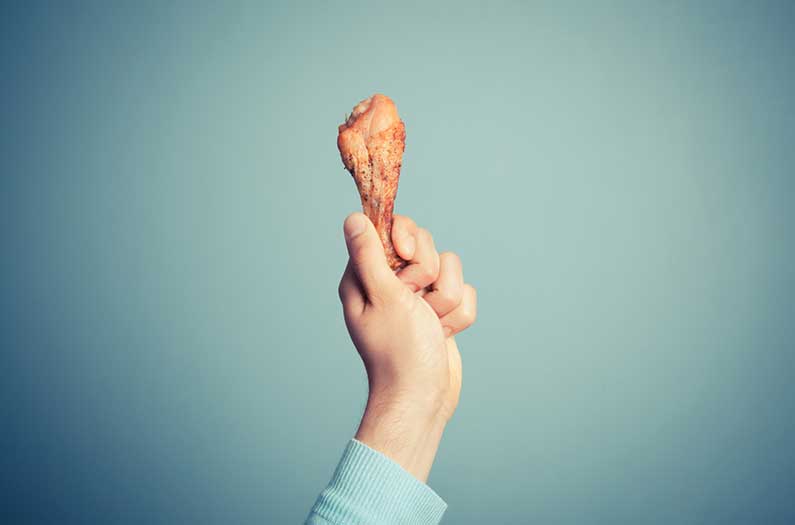 Switching shrimp with cod cut an individual’s greenhouse emissions by 34% and replacing dairy milk with soy cut emissions by 8%
By Emma Bryce
January 21, 2022

Reducing the environmental footprint of your eating habits doesn’t necessarily require a complete dietary overhaul. In fact, researchers have added to the evidence base showing that even small dietary changes can make big impacts: in a recent study, they show that frequent meat-eaters who exchange one item of red meat per day for a serving of poultry could cut their own emissions footprints by almost 50%.

What’s more, if embraced by just 20% of the US population, this minor sacrifice could cut the nation’s emissions by up to 10% overall.

Writing in the American Journal of Clinical Nutrition, the US-based researchers began by gathering data from a pre-existing federal survey of 16,000 Americans and their diets. From this dataset they identified the highest-impact foods, in terms of both emissions profiles and water use. Then, by identifying a set of foods that would be roughly equivalent culinary and nutritional replacements for those, they determined the environmental savings that could be made if consumers made the exchange.

If the most voracious meat consumers of those 16,000 respondents swapped one serving of red meat per day with a poultry equivalent — like turkey — the researchers determined that it would bring down the impact of their personal diets by 48%. Substantial savings could be made with other exchanges too — such as switching shrimp with cod (cutting greenhouse gas emissions by 34%), or replacing dairy milk with soy (curtailing emissions by 8%). But none delivered such large emissions cuts as switching out beef, which was uniformly identified as the highest-impact food.

This particular exchange also cut water footprints by 30%. Although, the largest water savings occurred when switching asparagus with peas (causing a 42% reduction in the water scarcity footprint). The researchers do acknowledge that that’s a somewhat arbitrary swap, however, which is perhaps less actionable than switching beef for turkey. But it nevertheless effectively reveals the highly variable impacts of many different types of foods.

Furthermore, the study revealed the large benefits at national scales of shifting citizens’ diets bit-by-bit. If only the 20% top beef consumers in the survey exchanged beef for turkey, and the remaining 80% of consumers’ diets were left unchanged, this could cut the greenhouse gas footprint of US diets by 9.6%, and water-use by 5.6%, if extrapolated to population scales.

These discoveries highlight the power of single changes to achieve big differences. Such findings could have useful real-world applications, the researchers believe, because small, easy-to-follow changes may be more effective in convincing consumers to make sustainable changes to what they eat. In the long run, this incremental approach may be more likely to shift consumption patterns, and ultimately achieve more for the planet, than advocating for dietary overhauls.

“Not only are diets complex, but habits are hard to break. Moreover, many motivated consumers are bewildered by the choices they face,” the researchers explain. “One strategy to promote change is with simple steps that are easy to understand and implement.”

None of this is to say that individuals should bear the brunt of climate responsibility — a point of ongoing contention in the climate action debate. Instead, tackling climate change should very definitely be a cross sectional effort, involving international agencies, companies, and governments, the researchers emphasize.

But, while individual actions are only part of this equation, understanding the best way individuals can make a difference could increase the power they have to bring about change. “Our study provides evidence that even simple steps can assist in these efforts,” the researchers write.

Rose et. al. “Single-item substitutions can substantially reduce the carbon and water scarcity footprints of US diets.”  The American Journal of Clinical Nutrition. 2022.