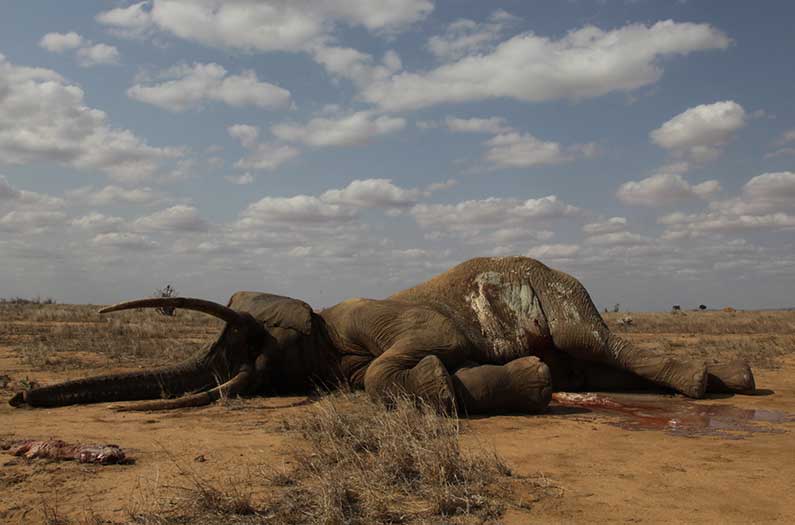 Decades of declining herbivore populations in central African national parks have conservation scientists arguing that smaller reserves might be better for wildlife
By Warren Cornwall
January 5, 2022

As conservationists press for a major expansion of protected habitat around the world, scientists with years of experience in central Africa say new evidence calls for just the opposite in the region.

With few exceptions, protected savannas in the central African countries of Cameroon, Chad, the Central African Republic and the Democratic Republic of Congo have witnessed a steep decline in large herbivores such as elephants and antelopes in recent decades. The new findings have led researchers studying the problem to a sobering conclusion: It’s better to focus on saving smaller patches of the best habitat.

“It’s a shame that we have to say, ‘Look, you have to retreat and we can’t conserve it all,’” said Paul Scholte, a Dutch ecologist who has worked for governments and nongovernmental agencies on conservation efforts in the region and helped lead the new research. “We would be the first who would love to conserve it all. But by experience we know that that’s no longer realistic.”

The challenges of wildlife conservation in Africa have long been documented. Parts of the continent remain havens for charismatic wildlife such as elephants, rhinos, lions, gorillas, and antelope herds. Yet poaching, the encroachment of farming, and deforestation have all led to worrying declines in wildlife.

The savannas of central Africa haven’t been spared. But the scale of the losses and the primary forces behind the problem have proven elusive. Habitat in the region sprawls across a number of countries, some wracked with civil strife. Methods for counting animal populations have varied over time, making it hard to make exact comparisons.

To get a clearer picture of what is happening to wildlife and why, Scholte, who first studied wildlife in Chad and Cameroon in the 1990s, teamed up with scientists from Africa, Europe and the U.S. as well as wildlife managers in several central African countries.

The team amassed 68 population surveys for large herbivores – both wild and domesticated – from the region’s seven main national parks with savannas, dating back to 1960. Those nature reserves cover 245,000 square kilometers – a quarter of the region’s northern savannas.  To account for differences among species, the scientists estimated the total weight (biomass) of the overall herbivore populations. To understand how natural forces might affect population trends, they tracked rainfall over that same time. To gauge human activity they measured changes in revenue from tourism at each park and in the number of park rangers, who enforce wildlife protections.

The results were grim, for the most part. In six of the seven parks, populations of large wild herbivores have declined precipitously in recent decades while domesticated livestock has grown. At the same time, revenues from tourists that often come to watch, photograph or hunt the animals has plummeted, according to results published in the journal Conservation Biology.

At two parks in Cameroon and one in the Central African Republic, large herbivores have declined by more than 90%. In Garamba National Park in the Democratic Republic of Congo the news is nearly as bad, with a roughly 75% decline, while another Cameroonian park, Bouba Ndjida, has seen its herbivores cut in half. Only Zakouma National Park, in southern Chad, had wild herbivores increase.

“We all know that wildlife is declining in these national parks. What we didn’t know was the degree of it,” said Scholte.

While exact circumstances behind the decline varied from park to park, there appear to be common factors that create a “vicious circle,” said Scholte. The clearest pattern was that wild herbivores went into decline on the heels of falling numbers of park rangers, something that began in the 1990s in most parks, said Scholte. The loss of park guardians was compounded by outbreaks of violence in some countries that discouraged tourists, fueled poaching and drove refugees with domesticated animals into regions around parks. Tourism dollars dried up over the last decade. In north Cameroon, photography tourism virtually disappeared, while revenues from trophy hunting fell by half. Hunting revenues nearby in the Central African Republic vanished.

Meanwhile, domesticated animals numbers have risen in many of the parks, the researchers found. It appears this happened after wild herbivores went into decline, said Sholte. But their presence in the parks now could make it hard for wild species to regain footholds there.

The one exception is Zakouma National Park in Chad. There, wild herbivore populations have more than doubled since the 1980s, while tourist numbers and revenues have soared over the last decade. The park is the only one where ranger numbers have increased steadily over time. It has benefited from sustained support from the European Union and the Chadian government over the past three decades, said Scholte. Unlike most other parks, fluctuations in wildlife numbers there follow rainfall patterns, a sign that natural forces are shaping population trends.

The message, Scholte and his fellow researchers write, is that sustained and significant funding for park management appears to be a linchpin to maintaining wild animals in the parks. Rather than spread existing money and park staff thin, they argue a more productive strategy would be to acknowledge the inability to police such large parks with existing resources, and “retreat” to park sizes that are manageable. “You have to give up your naive dreams and you have to say, ‘Okay, how can you save those places that still have potential?’” Scholte said.

Scholte acknowledged the message may prove unpalatable. Most of the objections from scientists reviewing the paper revolved around these final recommendations, he said. But he said the findings could be relevant beyond central Africa.

There is an international campaign to protect 30% of all land habitat by 2030, and nations are gathering in China in April to revise a United Nations convention aimed at protected global biodiversity. He warned that a numerical target could obscure what’s needed for success.