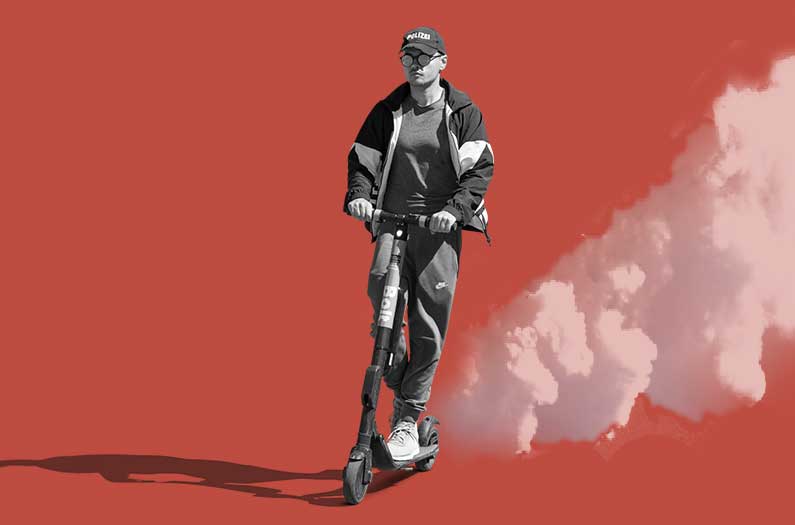 A new study shows that rented e-scooters and e-bikes replace walking and public transit trips, increasing the climate impact of getting around the city
By Sarah DeWeerdt
January 11, 2022

Shared electric bikes and scooters can increase the carbon footprint of urban transportation, according to a new study. That’s because people mostly use these vehicles for trips they would otherwise have made by walking, (non-electric) cycling, or public transit – modes of transportation with an even lower climate impact.

So-called “micromobility” services that enable people to share or rent e-scooters and e-bikes are often touted as a solution to urban gridlock that is climate-friendly besides. But until now there’s been little real-world data to show whether the way people actually use these services really does reduce carbon emissions.

Past studies have mostly relied on surveys, and some have made big assumptions about how other transport modes substitute for car travel. Researchers had little insight into how people choose which mode of transport to use – a key piece of the puzzle in designing more sustainable urban transport systems.

In the new study, researchers used cellphone data from 540 volunteers in Zurich, Switzerland to reconstruct more than 65,000 trips the study participants made via 8 different modes of transport over a 3-month period.

The researchers then folded in demographic and other survey data, bookings the study participants made on micromobility apps, weather conditions, and the proximity and availability of different transport options to create a model of transport decision-making.

They used already available data on the per-kilometer carbon emissions of different transport modes to compare the climate impact of e-bikes and e-scooters with that of the transport modes they tended to replace.

Read:  Could the fate of an ecosystem hinge on a single keystone gene?

But private e-scooters and e-bikes are more likely to replace car trips. So, private micromobility has a net benefit to the climate.

Distance is a factor, too. “For short trips, all micro-mobility modes mostly replace walking,” the researchers write. “As the distance grows, the shares of replaced public transport, bike and car trips increase. Personal e- bikes, however, replace personal cars substantially more often for longer distances than all other modes.”

The results likely apply to many European cities with good public transit systems, the researchers say. (However, they may not apply universally: some researchers have argued that alternative transport modes are more likely to substitute for car trips in places where a higher frequency of trips are made by car.)

The findings could help urban planners and policymakers figure out how to integrate different mobility options within a city. For example, cities could encourage micromobility services to place shared e-bikes and e-scooters in outlying areas to help people access public transit – rather than clustering these vehicles in the center city where low-carbon options for getting around are already plentiful. Cities could also provide subsidies or rebates to encourage e-bike and e-scooter ownership, and construct more bike lanes to enable people to make more trips with these vehicles.