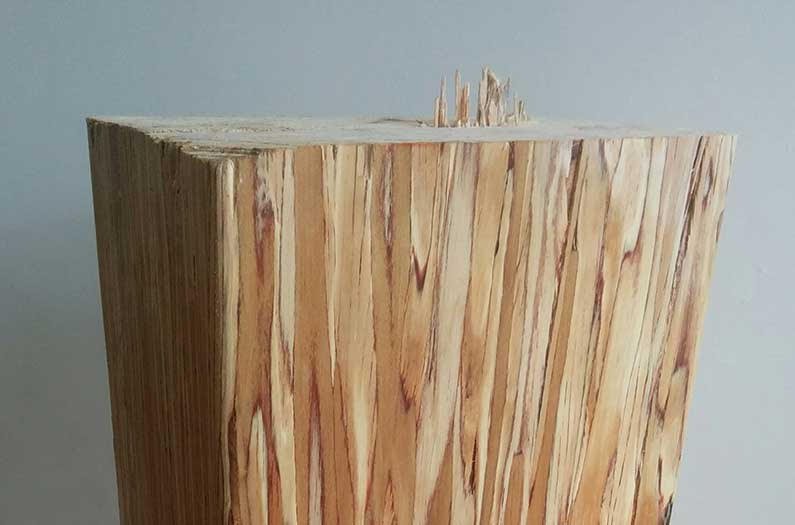 Looking for ways to pay for forest restoration, scientists hit on a a creative strategy: support new markets for fuels and construction materials made from small trees and branches.
By Warren Cornwall
January 19, 2022

It’s widely believed that many forests in the western U.S. are sick and need surgery using chainsaws and fire. But two major barriers stand in the way: Figuring out how to pay for the work and how to keep it from adding to the greenhouse gasses piling up in the atmosphere.

Now, a team of California researchers say part of the solution in their state – and elsewhere – could be making fuel and buildings from the skinny trees and leftover branches once treated as worthless scrap.

“If we’re really efficient and careful about how we are using the wood and invest in innovative wood products that can use waste wood, then we can achieve both net carbon benefits and wildfire mitigation benefits,” said Bodie Cabiyo, a forest carbon researcher and PhD candidate at the University of California, Berkeley.

There’s little disagreement that today, forests in the western U.S. need help. Forests that evolved to thrive with frequent fires are overcrowded with trees, following a century of firefighting policy dedicated to snuffing every wildfire. Intensive logging has replaced old, big trees with thickets of skinnier ones. Climate change has helped fuel hot, dry conditions ripe for wildfires. It’s a recipe for the kind of devastating mega-fires that have swept through the region in the last decade, incinerating forests and towns, and killing more than 150 people.

In 2020, California state and federal officials announced a new initiative to use selective logging and prescribed fire to help restore forests in the state and blunt devastating wildfires. The goal is to “treat” 1 million acres a year. But that could cost as much as $1 billion a year if it’s all done with logging. The lack of markets for wood too small to be turned into conventional lumber has made it hard to finance such forest work elsewhere. In northern Arizona, a prominent plan to thin millions of acres floundered thanks to difficulty selling the wood. In addition to the financial challenges, wood that can’t be sold could wind up burned or left to rot, releasing carbon into the air.

Cabiyo teamed up with fellow scientists at Berkeley and the U.S. Forest Service to see if part of the solution might be finding ways to turn this scrap wood into something valuable. They used computer models to analyze different scenarios: a “business as usual” approach with limited logging on California forests, a more aggressive approach of extensive thinning, and a third approach of tackling the problem while finding markets for fuel and wood materials using debris that would otherwise go to waste.

The computer modeling showed significant benefits from finding a way to make money with the scrap wood. If such wood sold for $100 a metric ton, the added financial incentive would lead to 12.1 million acres of California forest being treated over 40 years without a direct subsidy, compared to 8.1 million acres if an aggressive strategy was pursued without revenue from scrap wood. Creating these wood products would also lead to nearly a doubling in the overall reduction in carbon emissions – the equivalent of 16 million metric tons of carbon dioxide, versus 9.5 million metric tons, according to results published in December in the Proceedings of the National Academy of Sciences.

Crucial to this approach is figuring out how to sell the scrap. One possibility is converting it into products made by gluing together wood fragments, rather than the old-fashioned approach of hewing lumber from a single, solid tree. The result is products such as oriented strand board, a material much like sheets of plywood. Wood can also be turned into fuel by burning it to make electricity, converting it into a liquid ethanol or even making hydrogen fuel while capturing the carbon emissions.

The carbon benefits could be boosted further if all the lumber and wood scrap created by this work is funneled to making materials used to erect buildings such as apartments, the researchers found. It could take the place of carbon-intensive materials such as concrete and steel. Such an approach could boost the carbon savings to as much as 27 million metric tons per year.

But creating markets for this wood won’t happen on its own, said Daniel Sanchez, renewable energy expert at Berkeley and the paper’s senior author. Today, this kind of scrap sells for $30 a ton in California, said Sanchez, a price so low it’s often not worth hauling it out of the woods. There are signs of a growing demand for such wood, thanks in part to to state regulations requiring an increased use of low-carbon fuels, said Sanchez. One plant in Nevada is under construction with plans to convert trash shipped from California into liquid fuel. Another is being built in Oregon to do the same with wood waste.

A home-grown wood-products industry could be a bigger challenge. One big barrier is ensuring a steady supply of wood chips. Today those factories operate in places like the southeast of the United States, where an active timber industry provides enough waste to feed factories that cost as much as a $1 billion to build, said Sanchez.

“I feel relatively confident about the economics of making low carbon fuel from biomass in California,” said Sanchez. “It’s a little hard to see on the engineered-wood-product side. I think it is going to need more policy support from the state.”