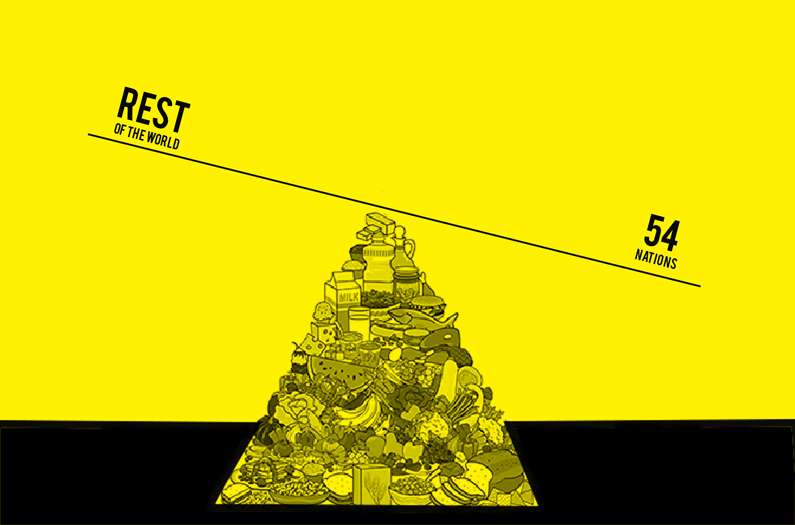 What would happen if just 54 wealthy nations adopted the EAT-Lancet planetary health diet?

Answer: it could lock away enough carbon to help them meet their emissions targets by century-end.
By Emma Bryce
January 28, 2022

If high-income nations switch to plant-based diets, they would cut greenhouse gas emissions and sequester almost 100 billions tons of CO2 by 2100—provided the land formerly used to farm animals was reverted to its natural state.

These hopeful numbers emerged from a recent Nature Food study which explored what would happen if we put the onus on 54 of the wealthiest meat-consuming nations to adopt the official EAT-Lancet planetary health diet, which prioritizes diets rich in fruit, veg, and grains over animal-based foods.

The study recognizes the huge contribution of diet to global greenhouse gas emissions—and also, its potential to help us reach our climate targets. Animal agriculture takes up about 35% of habitable land on the planet, and the largest appetite for animals is concentrated in high-income nations. In fact, animal products make up 70% of food-related emissions in high-income nations, but just 22% in low-income nations. So it’s clear where the burden of responsibility lies for tackling the planetary impact of meat-heavy diets.

Yet, the researchers’ results showed there are also benefits for wealthy nations in shifting to more sustainable diets.

IF these 54 countries adopted the EAT-Lancet diet, they’d be able to cut their agricultural emissions by 61%, the study found. This shift away from animal agriculture would free up 426 million hectares of land, a stretch of terrain larger than the European Union. Most of the freed land would be in the United States, followed by Australia, Germany, and France. About 35% of the land would lie outside wealthy nations in locations like Brazil and Botswana where livestock is farmed intensively and exported to wealthy countries.

But what’s more, if these countries then worked together to proactively protect the newly-freed land—for instance reforesting it and restoring its soils—this rewilded terrain would be capable of sequestering 98.3 billion tons of carbon from the atmosphere by century’s end. That figure’s the equivalent of 14 years of current global agricultural emissions, captured in restored biomass and soil.

Most tantalizingly for wealthy nations, this could make a serious dent in their obligatory emissions targets. The researchers calculate that this dietary shift, followed by sustainable land-use reform, could sequester enough carbon to fulfill the carbon dioxide removal (CDR) obligations of those 54 nations to limit warming to 1.5 °C.

That’s not to mention the variety of ecosystem benefits that would come with restoring wild land, such as increased biodiversity, improved soil health, cleaner water and air.

What sets this study apart from many others on global dietary change, is that it prioritizes the dietary responsibility that wealthy nations bear. In doing so it takes some of the burden off lower-income nations to change their diets, where animal protein may in fact be crucial for nutrition. (The EAT-Lancet planetary diet has also been criticized for overlooking the costs involved in shifting to nutritional and sustainable diets in many lower-income countries. So this study may help address that concern by focusing on its potential in rich nations first.)

Of course, the real impact of these sustainable dietary shifts rests on the capacity and will to protect and restore the land that’s left open by the departure of livestock. This isn’t a given, with so many diverse and competing interests at stake—ranging from bioenergy production, to other types of food farming. Taking these unknown factors into account, the researchers recognise that their overall findings represent “an upper bound of possibilities.”

Nevertheless they believe it is a critical possibility to explore. Protecting ecosystems through dietary change “is perhaps one of the biggest environmental health opportunities out there”, they say. “A rapid shift to these diets could really help society stay within environmental limits.”