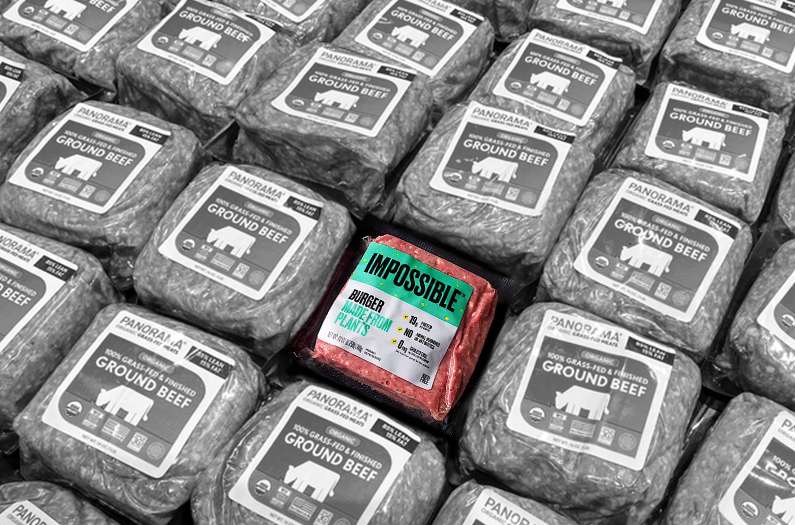 To have an impact, plant-based meats must replace animal-based ones. They’re hardly making dent.

A new study showed that increased demand for plant-based meat only drove a 1.2% decline in ground beef production—which amounts to a 0.15% decline in US cattle production.
By Emma Bryce
February 18, 2022

Consumers perusing the meat aisle in a grocery shop are these days confronted with almost as many meat alternatives as real meat. These plant-based burgers, ‘chicken’ strips, and fake bacon bits, all go to great lengths to mimic the real thing—and they’re usually pricier, too. Yet they’re often accompanied by the message that purchasing such plant-protein substitutes will tangibly reduce emissions and benefit the planet.

Now, a new study finds that these environmental credentials may be overhyped. The research shows that even if the costs of these alternatives declined and more Americans began consuming plant-based meats, it would make a negligible impact on the national production of emissions-intensive beef.

The study’s researchers, hailing from the California-based Breakthrough Institute, argue that to understand the climate benefits of dietary change, it’s not enough to simply look at shifts in what people eat. We also need to examine how these shifts influence the actual production of different food types.

In this case, the focus was on beef, the most emissions-intensive meat. Specifically, the researchers homed in on the replacement by plant-based proteins of ground beef, which is what alternative meats most commonly mimic to produce popular foods such as burgers and mince.

Then, they built an economic model that linked the production of beef with its consumption in the US, and looked at how that would change, if the price of plant-based meats (PBM) declined by 10%, or if the demand for these meats increased by that same amount. In each case they calculated that this would result in a roughly 23% increase in the appetite for plant-based meats—which you would expect to see reflected in less beef being consumed and produced.

But instead, their model showed a surprisingly limited effect. In fact, increased demand for plant-based alternatives only drove a 1.2% decline in the production of ground beef, which amounts to a minuscule 0.15% decline in US cattle production. Overall, that equates to a modest 0.34% reduction in the country’s greenhouse gas emissions from beef, which rises to just 1.14% when factoring in the emissions saved by reduced land-use change.

In summary, cattle and emissions decline “by orders of magnitude less than changes in PBM prices,” the researchers say. Interestingly, they calculate that similar declines in cattle numbers could be achieved by applying a 1% cattle tax in the United States.

The reasons for this small effect comes down to the complicated interplay between consumption and production, which reveal that consumer appetites don’t straightforwardly steer the market.

First of all, the study sensibly focused on replacing ground beef because it makes up the larger share of plant-based beef substitutes—but this only comprises a share of beef production, overall. On top of that, even if the demand for ‘mincemeat’ cows declines, that won’t necessarily translate to fewer animals being farmed: those cows could just be diverted to other production streams, such as for steak. What’s more, roughly 10% of US beef is exported. So if local beef consumption declines, one option is to export more—leaving cattle numbers relatively insulated from shifting national appetites.

The inherent complexity and dynamism of markets reveals why it’s important to explore dietary change through an economic lens, the researchers say: it can capture effects “that are not always immediately obvious”.

But more importantly, we shouldn’t treat meat alternatives as a panacea to the environmental problems of the meat industry, they say. Instead, it’s one tool among many to mitigate the harms of industrial livestock farming—such as reducing cattle’s methane emissions, and managing pasturelands better to lock more carbon away. “Reductions in price of [plant-based meats] alone will likely not have a disruptive impact on U.S. cattle production.”