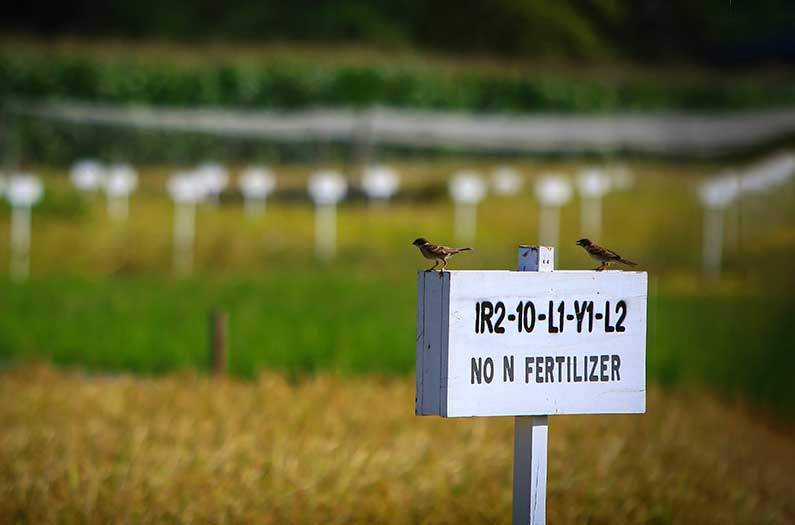 Researchers have engineered a common soil bacteria to steadily secrete ammonia and successfully fertilize rice crops. One day, these novel engineered microbes could replace the chemical fertilizers that are ubiquitous on farmland, and which cause so much environmental harm.

Writing in Applied and Environmental Microbiology, the researchers introduce their star candidate: a bacteria called Azotobacter vinelandii which is part of the diazotroph family. Diazotrophs are biologically equipped to fix nitrogen from the atmosphere, turning it into the compound known as ammonia, which it leaches out in varied and typically low concentrations.

Because ammonia is so fundamental to the growth of plants, A. vinelandii  has long been of interest to researchers, who had also identified a particular gene in this bacteria that seems to be involved in regulating its natural ammonia production. But, until now no one has understood exactly how this gene drives the ammonia-excreting behavior—which would be the key to controlling it, and perhaps boosting ammonia production to make it functionally useful for crops.

The researchers set out to discover this by experimentally tweaking the gene to see how that impacted its functioning. Through this they discovered they could influence the bacteria to start producing ammonia—and critically, they could dial up its production to create larger quantities than before, enough to fertilize crops.

To make sure of that, they tested these new-fangled bacteria out on plants. The researchers planted rice seedlings in soil that contained either regular versions of A. vinelandii, or the upgraded type that churned out more ammonia. In the rice plants treated with the new bacteria, the uptake of ammonia was 67% higher than in the other plants. This suggests that if applied on farmlands, A. vinelandii could directly fertilize crops.

These bacteria would be more than a replacement for chemical fertilizers: they could also offer a solution to some of the stark environmental consequences of applying fertilizers at industrial scales. A major reason fertilizers are a problem is that they are inexact and therefore inefficient: farmers struggle to predict how much their crops will need, a factor that depends on the crop type, too. And so they may compensate by overapplying. The excess that’s unused by plants leaches into the soil, where it produces greenhouse gas emissions, and is washed out by rainwater, causing mass eutrophication downstream.

How do the engineered bacteria improve this situation? The researchers have shown that it’s technically feasible to tailor the amount of ammonia the bacteria secrete. If they could be engineered to dial their ammonia production up and down—delivering only as much ammonia as plants need—this could help reduce the excess ammonia and the pollution downstream. This more efficient way of fertilizing could also save farmers money.

Getting to this point will take a little more fine-tuning: so far the researchers have focused on getting the bacteria to emit a steady amount of ammonia, in quantities high enough to effectively feed plants. But that’s created a “blueprint” for the next step, they say: engineering different strains of bacteria that will release ammonia in customized quantities, to suit different crops.

For now, the research takes a step towards “biofertilizers”, one in a raft of more sustainable solutions the world will need to break our dependence on polluting agricultural chemicals.