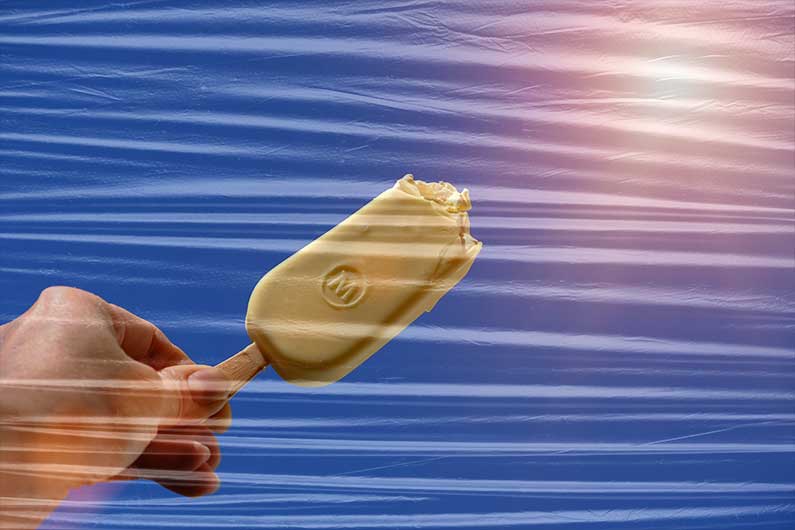 Made of biodegradable, eco-friendly materials, the film scatters sunlight so effectively that it can keep ice cream, and even glacier snow, from melting
By Prachi Patel
February 24, 2022

Even as the world reveled in the athletics on display at the 2022 Beijing Winter Olympics, it was hard to shake off the threat climate change poses to the winter sports on display in the gleaming ice arenas and artificially created snow slopes. As the world warms, we will spend increasingly more energy and money to produce ice for sports, and even more crucially, for refrigerating food.

A new film made from abundantly available biodegradable materials could help reduce that energy use. Reported in the journal Science Advances, the film scatters sunlight falling on it to cool the air around it enough to keep ice from melting for days even under direct sunlight. That could help reduce the energy used in preserving food, especially in warmer climates.

And that’s not all. The film could also be used to slow down the melting of local glaciers, say its developers from Nanjing University in China.

They started with abundant, eco-friendly cellulose alginate, which is biodegradable and can be digested by microorganisms. By injecting a solution of the material from small needles onto a surface, they spun a mat composed of tiny microscopic fibers of cellulose alginate. The fibers are interconnected, forming pores of varying sizes that can scatter and reflect sunlight.

When the researchers placed an ice cream bar in a bag made of the new film in sunlight, it stayed the same for over 80 minutes. Ice cream placed in bags made of the most commonly used packaging materials—white paper, aluminum film, and plastic film—melted in that time frame.

Next, they placed pieces of ice, uncovered and covered with the film, in a refrigerated box under the sun. After five days, the bare ice had completely melted away, while there was a slight loss in the film-covered ice.

Results were similarly promising in snow outside in real-world settings. The team covered an 80 square meter patch of snow on a local glacier with the film. After 20 days of outdoor sunlight exposure, the covered snow was about 0.7 meters higher than the uncovered snow. “These results provide direct proof that our radiative cooling film is effective in slowing the melt of local glaciers,” the team writes.

To go one step further, the team modeled what would happen if an iceberg dozens of square kilometers in size—about the size of a large ski resort—would be covered. The models showed that the bare iceberg would lose 1 meter of thickness through melting in the during the summer season, while the covered ice would not.

“This work provides inspiration for developing an effective, scalable, and sustainable route for preserving ice and other critical elements of ecosystems,” the researchers conclude.