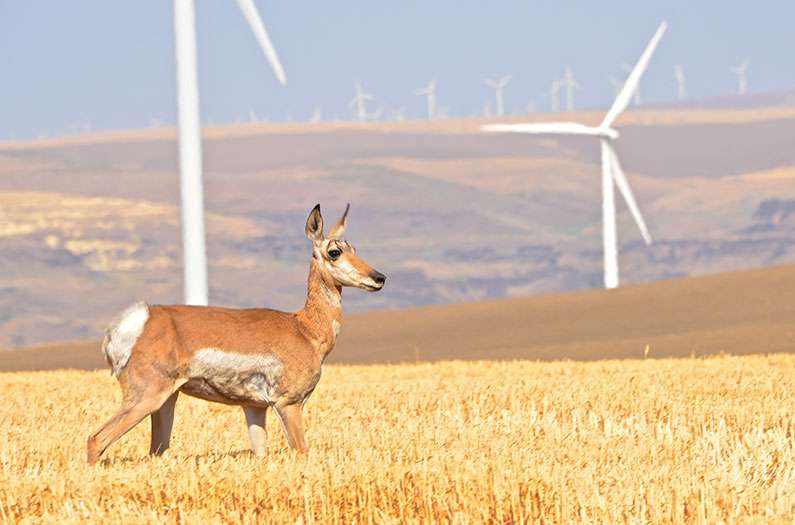 As the countries rush to build more solar and wind power, conservationists worry it could crowd out wildlife. A new forecast suggests there's room for both in many places.
By Warren Cornwall
February 9, 2022

A low-carbon future means lots of solar panels and wind turbines. Which begs the question: Where do we put them all?

A growing human population is already squeezing natural spaces, thanks to demand for housing, food and other goods. Now, the push to swap fossil fuels for renewable electricity is raising concerns that rows of solar panels and battalions of skyscaper-tall wind turbines could encroach on important wildlife habitat even as conservationists try to enlarge natural reserves.

But new research suggests that in much of the world, people won’t be forced to choose between wildlife and clean power, at least for the next few decades. “It should be possible, if we are careful, to ramp up wind and solar installations globally … without undermining critical efforts to conserve biodiversity,” said Felix Eigenbrod, an ecologist at the United Kingdom’s University of Southampton who was involved in the study.

As pressure mounts to reduce net greenhouse gas emissions to zero by mid-century to stave off the worst effects of climate change, the amount of renewable energy infrastructure needed is staggering. Compared to 2020 – a record-setting year for new wind and solar power plants – it could take a quadrupling in new annual capacity – the equivalent of building today’s largest solar facility every day, according to the International Energy Agency.

Fossil fuel extraction also takes a toll on the landscape. Witness the devastation wrought by mining oil from tar-soaked sands in northern Canada. But it has the advantage of producing energy in a far more concentrated form. Coal and gas can generate up to 2,000 watts of power for every square meter of land, while renewables peak at just a fraction of that – around 10 watts per square meter for concentrated solar, in which mirrors focus light onto a container of high-temperature fluid.

Scientists have warned that the rush for renewables could imperil vital habitat. But such forecasts are uncertain, limited by the accuracy of predictions about such things as where solar and wind farms will really get built. In an attempt to get a clearer view of what the future might hold, Eigenbrod and three others tried to build a better computer model encompassing much of the planet.

They created a database of 24,600 existing wind and solar-power sites on land in 153 countries. They used that to predict where future power projects are likely to go, based on characteristics of current facilities. They matched those forecasts with maps of existing protected lands and of places that are a priority for future protection.

The picture that emerged was one in which many parts of the world would not see an increase in conflicts between high-priority habitats and new renewable power in coming decades, the scientists report in the Proceedings of the National Academy of Sciences.

Today, approximately 15% of wind and solar sites overlap with important conservation areas, the team found. In the near future – approximately the next twenty years – their forecast showed a limited number of hotspots where future habitat and renewable energy production overlapped in North America, South America, south Asia, east Asia, and Russia.

The results are “really encouraging for tackling the ecological emergency,” said author Sebastian Dunnett, who led the research at Southampton. “If we can expand the roll out of an important part of the climate solution – wind and solar power – without undermining critical efforts to conserve biodiversity, this will be a big step in the right direction.”

The news isn’t all blue skies and strong winds for renewables, however. The Middle East and central and northern Europe stood out for having above-average potential conflicts. The study didn’t cover Central America, Australia, southeast Asia, Australia or Africa because the low density of renewable projects made it hard to accurately model. And even in areas with relatively few overlaps, they were still there. As the authors note in the paper, “careful land use zoning is still very much required.”