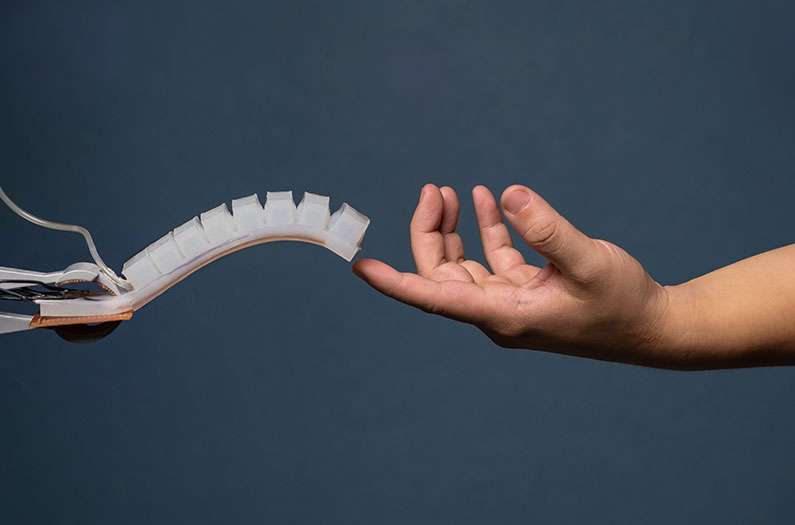 Researchers have 3D-printed robotic devices with an ink made from gelatin and sugar; the gel can be reused a few times and then it disappears without a trace when it's work is done.
By Prachi Patel
February 10, 2022

By mixing gelatin and sugar, researchers have made biodegradable ink with which they 3D print soft robots. The gel can be reused to make other robots and objects up to five times before it loses its mechanical properties, after which it degrades leaving no trace.

This advance, reported in the journal Science Robotics, paves a sustainable path forward for the fields of 3D printing and electronics, which have traditionally relied on petroleum-based plastics.

While robots are traditionally made of metal and hard plastics, there is a growing interest in making bots with soft bodies. Inspired by living creatures like octopi and worms, soft robots could squeeze into tight spaces where metallic bots can’t, prove valuable for surgeries and be much more suited for interacting with humans and animals.

But the materials used to make soft bots “are often nonbiodegradable or stem from nonrenewable resources, contributing to an ever-growing environmental footprint,” write Florian Hartmann, Martin Kaltenbrunner and their colleages from Johannes Kepler University Linz.

The researchers wanted to make a recyclable, biodegradable material that could be crafted into complex shapes. They devised a recipe composed of gelatin, glucose, citric acid and glycerol. Citric acid is a preservative that prevents the growth of bacteria and mold in the sugary gel, while glycerol helps the gel keep its shape in water.

By carefully adjusting the ratios of glycerol and glucose, the researchers made a gel that can be 3D-printed and can be stretched up to six times its length without damage. The material can be remelted and reused five more times, and completely dissolve and disappear when placed in water, compost or sewage for several hours.

Using the material, the team printed a soft, finger-shaped robot whose motion can be controlled with compressed air. They also integrated LEDs and light sensors into 3D printed strips to make a stretchable sensor that could detect how light intensity changed as the gel was bent and compressed. By combining the finger and light-sensing device, they made a soft robot that could detect objects around it and move them with a push.

They also hope to make new gel formulations that are easier to print into more complicated shapes. In the end, they hope that their sustainable and cost-effective 3D-printing strategy “will likely have a positive influence on soft and collaborative robotics through a reduced ecological footprint.