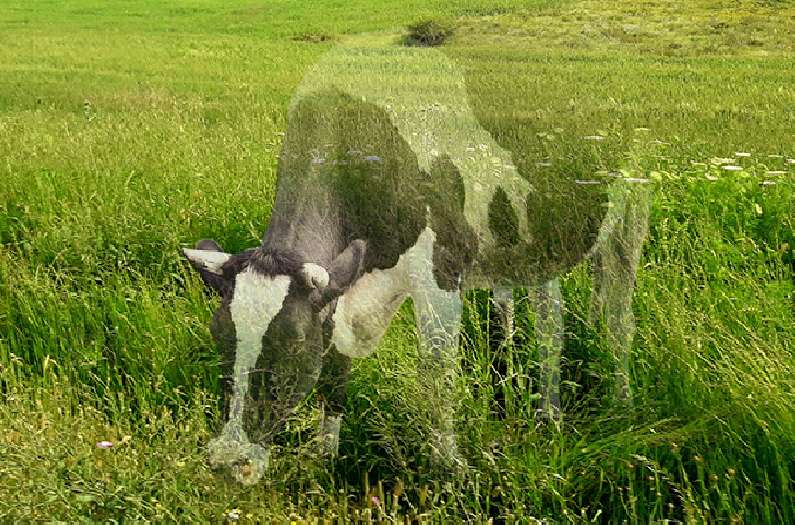 What if the world phased out meat consumption over 15 years? The numbers are stunning—and instructive.

Such a bold transition would cut anthropogenic emissions by 68% by century-end, and get us more than halfway to achieving the goals of the Paris Climate Agreement.
By Emma Bryce
February 4, 2022

The climate impact of livestock is so powerful, that if we phased out the consumption of meat over the next 15 years, we could start stabilising greenhouse gas emissions from 2030 onwards. This would require a difficult culinary sacrifice — but it would get us more than halfway to achieving the emissions reductions laid out by the Paris Climate Agreement.

These bold findings come from a recent study published in PLOS Climate, which joins several recent papers that have looked at the power of dietary change to achieve our climate targets—whether by encouraging more plant-based diets in rich nations, or by exchanging red meat for poultry.

What this new paper brings into the mix is that it zooms in on the climate potential of removing ambitious amounts of methane and nitrous oxide from the atmosphere over relatively short time scales, through the way we eat.

These two greenhouse gases are products of livestock farming and feed production, and they are also exceptionally potent—with warming potentials dozens of times more powerful than carbon dioxide. But the silver lining is that methane and nitrous oxide also degrade more quickly than other gases in the atmosphere. So if we eliminate these gases, it could have a rapid climate-cooling effect.

The new study models three main ways to reduce these gases through diet. One option is to immediately halt our consumption of meat and switch to plant-based diets. Another is to replace only certain animal-based products in our diets. The third option is where the researchers believe there is the greatest potential for change, while also being achievable: this scenario would see us phasing out global meat consumption and transitioning to a plant-based diet over a 15-year period.

Their model also factored in how much additional carbon could be captured in each scenario if we restored the land leftover from livestock production into biomass-rich ecosystems again.

These beneficial effects would be realized quite rapidly, on climate timeframes: as animal agriculture is phased out and biomass accumulates on rewilded land, it would manifest in global cooling from as early as 2030. These effects would peak over the 30 years after that, until 2060.

An important question is how this translates to the goals of the Paris Climate Agreement. When the researchers applied the results to that target, they calculated that the cooling effect of reduced animal agriculture is substantial enough to achieve more than half the net emissions reductions needed to keep global warming to below 2°C by 2100.

In line with the growing consensus from research on this subject, these findings highlight that diet, as a single tool, can pack a serious punch in helping us reach our climate targets. By laying it out as a 15-year process, the study also brings it into the realm of reality—unlike other studies which don’t always give a time frame on how to achieve this dietary change.

What’s more, the authors even propose a dietary scenario that doesn’t require a complete rejection of meat. They found that the bulk of emissions decline  (90%) comes from ceasing the consumption of ruminant animals such as cows, sheep, and goats. So we could, for instance, continue consuming chicken and eggs as key animal proteins, and still achieve considerable emissions declines.

It is worth noting that the study’s two authors are intimately involved in the alternative protein company Impossible Foods, and so they have a stake in encouraging the transition to meat-free diets. This might contribute to their optimism that this transition is possible—despite widespread acknowledgement that the global phase-out of animal agriculture will be an enormous challenge.

Indeed in many parts of the world, protein-rich plant-based diets are harder to access, and more expensive, than meat. Switching to meat-free diets will require significant investments to make this transition fairer and more inclusive, the researchers on the current study emphasize. Financial support will also be needed for livestock farmers, who shouldn’t have to suffer the consequences of the global shift away from meat, they say. While these are big challenges to tackle the researchers note, pragmatically, that they “must be compared to the economic and humanitarian disruptions of significant global warming.”

Besides, the study is now part of a large body of research that collectively highlights dietary change as a uniquely powerful and singular tool to stabilize climate. In fact, changing what we eat has such outsized potential to tackle climate change that without it, we won’t achieve this goal, the researchers argue. “Reducing or eliminating animal agriculture should be at the top of the list of potential climate solutions.”